My recollection is that Automatic Teller Machines used to be much simpler devices, and much faster. I’m sure back in the day I timed myself getting cash using the basic buttons and 1-2 line dot-matrix LED “display” they had back then and had it down to under 30 seconds.

These days ATMs are complex beasts with colour screens and animated ads, but the functionality to customers is almost the same as it was back then: put your card in, enter your PIN, do an enquiry (check your balance) or make a withdrawal, from account Savings, Cheque or Credit, enter the amount, then take your cash and card and let the next person have a go.

Each transaction takes waaaaaay longer than it used to. It’s not just the ads, the whole thing seems slower. 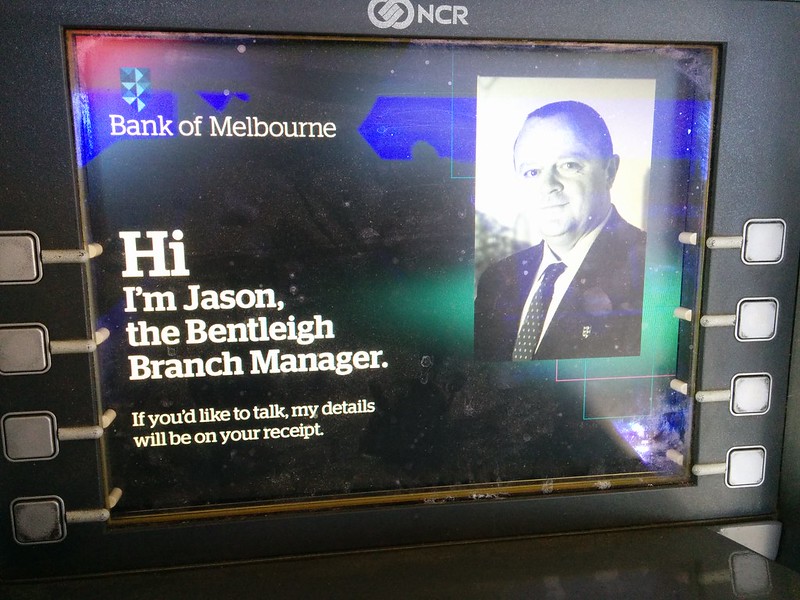 So anyway, I sidled up to an ATM last night to get some cash. Slipped the card in, and as usual, the face of Jason the local bank manager popped up, with an invitation to contact him via the details on the receipt. (I never opt for receipts, and the ad is the same even when the ATM can’t print receipts, as it often can’t.)

Normally after a few seconds of Jason’s attentive stare, it then warns you to cover your hand as you enter the PIN… despite that Bank Of Melbourne ATMs all seem to have a built-in cover.

This time however, it got stuck on Jason. It had frozen up.

I gave it what seemed like a very generous period of time before I started punching buttons. Cancel, Clear, even that button to trigger the audio prompts through a headphone socket. No response.

After a minute or two, it was obviously not going to unfreeze, or give up the card. Jason’s invitation to ring him was still on the screen, but I obviously wouldn’t be getting the receipt with his phone number on it to actually do so… though it was around 6pm anyway; I doubt he’d still be at work.

So I found a (barely readable) enquiries phone number on the ATM and rang it. I thought at least if I can get the card cancelled before I walk away, nobody can use it if the ATM spits it out.

The bank’s hotline of course had an automatic menu wherein no option quite described the situation I was in. Was the card lost or stolen? Well, not really lost, since I knew it was in this ATM. Stolen? Again, only if you count the bank’s own automaton as having stolen it.

I chose the option that loosely approximated my situation, and after trying to tell the machine by way of the phone’s Hash button that I had no idea what my Access Number, Card Number or Access Password was, and some minutes on hold (everybody’s idea of fun), I then spoke to a guy who said he couldn’t help, and he transferred me.

All the while I was standing in front of the ATM blocking anybody else using it, hoping I didn’t look like a dunderhead who can’t use such a basic machine, or some kind of ATM-hog. Thankfully nobody else wanted it.

The lady I then got transferred to was able to help… at least, after making me answer some security questions (including my verbal password, though she never made clear if I had correctly guessed or not), she cancelled the card and ordered a replacement, and usefully also to connect one of my other cards with the bank to the account I had intended to access. I was able to withdraw cash from another ATM using the second card. Hey cool, maybe I don’t even need the replacement!

I also asked her if she wanted to know precisely which of her bank’s ATMs had gone kaputsky. No; she implied she knew already. Perhaps as its last gasp before freezing it sent a message back to base saying it had grabbed my card, and she was able to see that information.

Oddly, passing an hour or two later, the ATM appeared to be working again. Or perhaps it was a trap, lying in wait to lure another unsuspecting customer into giving up their card.

I’ll leave you with this snippet from Wikipedia:

Geez, I would have been screaming and yelling four-letter words at the woman by then. Sounds like you kept your cool. Well done.
One consolation, at least you were in Bentleigh not Barcelona.

Just before I get the 703 bus tonight, I’ll pop in and say hi to Jason.

I would suspect there is a lot more on-line back to base checking and status reporting going on during the transaction than when ATMs were first introduced.

For example, I’ve noticed that in the last couple of months there is a new, lengthy, delay between putting my card into an ANZ ATM and getting the passcode page. I would suspect that the ATM is now doing some additional on-line back to base verification of the inserted card before proceeding to ask for the passcode.

I remember reading years ago about a situation where ATMs were on a bank’s LAN; the ATMs were running some old unpatched Windows, and ended up infecting all the other computers on the network. Now there are many things wrong there, but I’m sure running a desktop OS is probably one of them.

I’ve never had that sort of trouble with an ATM even after using them since the mid 80’s. One time many years ago after taking several hundred dollars out of an ATM in Massachussetts I counted the money and it was short. Luckily the bank was open and an employee opened the ATM and the extra bill (note) was stuck in the dispensing chute. I suppose over the years things naturally get more complicated and additional security features slow things down.

Bahahahhaha, that snippet from Wiki is gold!!!
You know what I find annoying with ATMs these days? The “would you like to save this is your favourite transaction” question. go away.

As an ANZ ATM user, I agree with the earlier Andrew. ANZ machines are much slower now. Some are part touch screen, some not. Very confusing. Cover the keypad with your hand, you are told, while you use one hand to push buttons and the other is holding your wallet. An ATM swallowed my card years ago, but I can’t recall how it was resolved.

I have accidentally left money in the ATM a couple of times. Lost a few hundred dollars. Very annoying.

I think it happened for these reasons: 1) I was in a hurry, stressed and not thinking straight. 2) The ATMs used to give cash first and then card, now they give card first and then cash so once i got my card, I ran off.

Having been bitten twice, I now use the supermarket to withdraw cash as it doesn’t require me to insert my card and also gives spoken audio telling me to take my cash.

All myki devices also use a Microsoft operating system.

Not sure why most ATM’s have to hold your card.
HSBC machines are sort of “insert and pull out” swipe types. I prefer these ones.

Slower transactions in 2013 than 1993 are predominantly due to;
a) Windows XP, is slower than OS/2 was at initialising the peripherals, eg. the card reader after returning a card and being ready for the next card/transaction. Though that doesn’t impact the speed of a transaction as much as the speed between transactions, you are waiting for a couple of seconds before the machine can accept your card.
Windows 7 machines are faster than those still running XP (still the vast majority)
b) EMV chip card processing, the new delays are the ATM reading the chip and retrieving processing rules associated, same issue at POS terminals. EMV is the elephant in the room.

@Jacob – I imagine the order was reversed because from a bank’s perspective, they’d rather you lose a couple of hundred in cash, than your bankcard, which they need to replace and/or deal with the consequences of fraudulent use.

@jacob I’ve always believed the order of return – card first, then money – is deliberate. If you forget your money, your loss is fixed and can’t lose any more money. If you forget your card, your loss is potentially greater – at least to your account balance or daily limit. The ANZ, for example, states that “the account holder is liable for losses arising from unauthorised transactions that occur because a user contributed to the losses by leaving a card in an ANZ ATM,” although it is not clear how this clause relates to the surrounding clauses limiting liability. If the cash is delivered first, there is quite a high risk that people in a hurry will grab the cash and, having ‘completed’ the transaction, forget the card. It is almost impossible to forget the card, however, if the ATM requires it to be removed before the cash is delivered. Good psychology.

Incidentally, I time a withdrawal at an ANZ ATM yesterday – 38 seconds, and this included entering the amount. Shorter than I expected.

I agree with @Julian and @andrew. So far, I’ve never left either card or money behind in the ATM, but it’s the money I’m much more focused on, so it makes sense to me that the card should come out first.

There’s another ATM design feature that I didn’t know existed until a colleague told me a few years ago. She had stopped to make a withdrawal from an ATM on the way to work, but it was only after arriving at work that she realised she had failed to collect the cash. She rang the bank in some distress, because it was several hundred dollars. They investigated, and told her everything was fine; when she failed to take the cash within a certain number of seconds, the machine had swallowed it again. So she wasn’t out of pocket at all.

This feature wouldn’t apply to every machine – I’ve seen some ATMs that drop the notes into a tray, rather than just poke them out of a slot. I don’t think they’d be equipped to swallow the notes again. And of course the whole thing depends on there being no one standing behind you, or walking past just after you finish the transaction. An honest person would alert you to the fact that you’ve left cash behind, so the feature would be redundant, and a dishonest person would just pocket the money. But it’s a useful feature, and one that neither I nor the people in my office had ever heard of. I wonder how widely known it is.

You get cash from the supermarket ? Hah ! I’ve never left cash behind in the ATM, at the supermarket I have tried extra-cash-out twice, and then forgotten to take the cash twice. I am used to collecting coins for change, the notes come out of a slot at ankle level, very quietly.

The ATM’s are much slower than they used to be, I assumed it was because slow-witted people take several minutes to read the instruction to hide their pin number.