Sometimes you see claims that lots of other major cities have all-night trains (so we should have them too). Recently I went looking to see which do.

Well, a lot of the world’s biggest cities don’t.

Most of these big cities have extensive night bus networks instead, which generally run 7 nights-a-week. 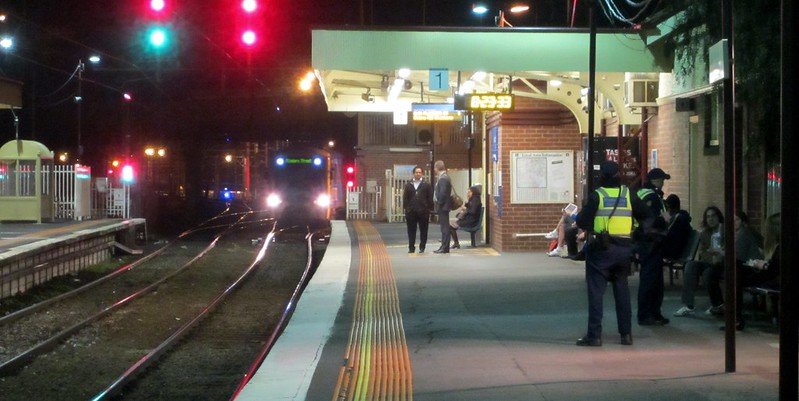 There are some 24/7 train services around the world, but they are not very common, in part because at least some overnight periods are needed for maintenance — of tracks and other resources. Those that run 24/7 may have multiple track pairs so they can handle track works.

Note those train frequencies as you read on.

Labor, with an eye to this November’s election, has today pledged a one year trial of all-night public transport on weekends. Here’s the detail, gleaned from the Herald Sun report, their official web site, and tweets with Labor’s PT spokesperson Jill Hennessy.

All suburban train lines would have hourly services (both to and from the city) on Friday and Saturday nights. PSOs would be on-duty until the current first train times in the morning — eg between about 5am and about 8am depending on which day and station.

(It remains unclear what effect the PSOs are having, particularly on quiet stations with little or no crime.)

Nightrider buses would remain, but it sounds like they would be tweaked to better serve areas that don’t have trains and trams.

Buses to major regional centres “Geelong, Bendigo, Ballarat and Traralgon” would depart at 2am — these match the major V/Line commuter corridors, though Seymour is missing.

Denis Napthine’s response was, predictably, to pan the idea.

He may have a point there. I’ll get to that in a minute.

Uhh… Just because you want and need one doesn’t mean you don’t need or can’t have the other.

Peak hour is indeed a key market for public transport, but — as in any big city — outside peak hours is important too. Melbourne’s traffic congestion is now a seven-day-a-week proposition. Some roads such as Hoddle Street and Chapel Street are regularly heavily congested late at night. People need to get around at all times of day (and night), and public transport should cater for that.

In fact, the least cost-effective public transport systems are those that have all the infrastructure for peak hour only, but then don’t use those resources outside peak. For instance some of the North American commuter train systems have entire fleets that run one round trip per day — a huge cost for the trips they attract.

And there are problems with current after-midnight services, particularly on weekends. Nightrider buses are often packed or leaving people behind, and complaints about taxi queues abound.

Yes indeed, well, the Coalition may be managing delivery of new trams, but they haven’t actually paid for any of them. The fifty being delivered were all funded by Labor, and there’s still no sign of the additional ten that the Coalition said they would add to the order.

But… it’s a long way from perfect. Hourly trains and trams? Not great.

Long waits kill PT use like nothing else. Nobody likes waiting an hour having just missed a service, especially at night. Most trips home by car in Melbourne could be done before the next service turns up.

It’s even worse if making a connection of another service.

Nightrider limped along with hourly services for over ten years. It only got popular when it switched to every half-hour, and abandoned the premium fares.

The very real danger here is that this trial will be a very expensive flop. No doubt some will use them, but hourly services will put a lot of people off, and it may have little effect on those long CBD taxi queues, let alone anybody who has the choice of driving.

The huge cost of staffing stations all night with PSOs may mean it costs a fortune to run, with relatively few people making use of it. And few people using it means safety issues (including perception of safety) may be a problem.

If you’re going to spend all this money, you might as well go a bit further and run services at least every half-hour. The incremental cost of extra drivers (and running costs) is likely to be tiny against the standing cost of keeping the network open — particularly various support staff and hundreds of PSOs.

This seems to be the pattern with most of the all-night train services overseas, with their trains every 15 to 30 minutes. If you’re spending the cost to keep the system open all night, don’t skimp on the services — it’s not worth it running a big rail system to only put hourly trains on it.

7 replies on “Labor’s all-night PT proposal (and how do other cities manage 24-hour trains?)”

Good summary Daniel (given you have scant material available).
A trial is probably worthwhile – better than a twelve month inquiry or feasability study.
Yes, I agree with you that 30 minutes is a lot better than once an hour.

Premier Napthine may say that he knows people want more public transport at peak times, but the actions of his Government in cutting services this January speak more loudly than his words.
While all-night trains might be nice, would it not be more cost-effective to improve the Nightrider bus service? This could include better information about routes (perhaps align the routes more closely to train lines, too), more services at busy times and perhaps some services 7 nights a week. As you point out, this is the approach adopted in many major cities.
However, the proposal for all-night trams on certain routes is definitely a good idea. But, once again, it’s important that information about these is readily available.

Well Mr Napthine, I say we want both. More peak hour trains, and more hours of operation too.

I do agree with the maintenance issue with 24/7 rail services, but that is not a serious issue with buses. So why are out SmartBus network not operating at least hourly 24/7????

Even with the maintenance issue with rail, you should still be able to have a hourly 24/7 service to say Caulfield and Box Hill. Perhaps Cheltenahm and Blackburn too?

We could then have connecting buses which connect with the trains at that locations.

We could have alternating lines to have all night services. Such as, Sandringham and Dandenong some nights, Frankston and Glen Waverly on other nights.

Personally, I think that even though trains and trams should be at least half-hourly, there’s still a good chance that hourly could be successful because in this case, driving is uncompetitive to start with (which is why so many people catch taxis instead). Taxis aren’t a particularly great option either, they’re costly and you have to wait ages for them anyway.

Although Nightrider is competitive in many cases, it also has issues with lack of awareness (i.e. Do people know that Nightrider exists and if so, do they know if it will get them to where they need to go?) which is a problem that trains and trams wouldn’t have.

Having said that, given that half-hourly PT would be far more useful than hourly PT despite not being much more expensive, it would clearly make sense to run services half-hourly.

I’d dump the trains in favour of a top-notch all-night tram service. Melbourne’s entertainment precinct isn’t just the CBD, it’s in a 180-degree radius of the city taking in Brunswick, Fitzroy, around to Hawthorn, Prahran then St Kilda and Port Melbourne. Huge numbers of taxi trips are just ferrying people between venues in these areas (Melbourne’s most common cab trip is from the casino to accommodation in the CBD, about a $5 fare). Cabbies hate these short fares because they’re financially not worth the effort. Get frequent trams in to handle this aspect of the late-night transport problem, and it frees up the cabs to do the long trips home from the city to the suburbs. Trams are also a safer option than trains, because they are usually travelling busy streets, are usually easy to see into, and the driver usually has some idea what’s going on inside.

I can imagine that any train services run on a Friday or Saturday night will be popular, the city is popular for people drinking, so that rules out driving; and as noted, taxis are hard to come by and expensive. Hourly services would still have plenty of bums on seats. 30 minute services, of course would be better.

In Toronto, at least most the places I travelled while I was there, trains stopped at about 1am, and bus services that mirrored their paths operated instead. They were usually busy, and ran fairly frequently. Personally I’d be perfectly happy with that, providing the buses could run fairly direct paths between train stations, in many cases this would be difficult.

They could at least run Nightrider every night of the week.

(For the record, Amsterdam’s night buses run all week long, from midnight until 6am).