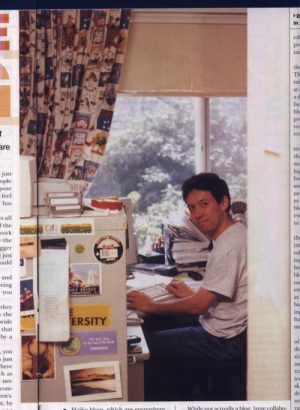 Daniel Bowen, a computer programmer from Melbourne, has been keeping an online diary for more than eight years. He says it started as humorous writing back when he was at university and gradually became more autobiographical. “A friend suggested I write it more as a diary, and it went from there.”

The journal, Diary of an Average Australian, is one of the oldest and longest-running blogs on the net. Right now, there are more than 500,000 blogs worldwide, according to Cameron Marlow, who runs the Massachusetts Institute of Technology’s Blogdex. Most owe their creation to software such as Blogger, LiveJournal or Groksoup, which makes online publishing a type-and-click affair.

A blog – or web log – can be part diary, hyperlink collection, confessional, memoir, or public forum. Or it may just consist of someone shooting his or her mouth off. What unifies most blogs is that they’re personal, subjective and often quite intimate in nature.

Personal web sites have always been popular, but it wasn’t until a do-it-yourself site called Blogger came along that the phenomenon really took off. Its slogan is “push-button publishing for the people”. It’s free and only requires that you register an account. Using it is simple: once you’ve registered you’re given a URL titled “Blog This”. When you come across something interesting on the web you click the link and the address, as well as some descriptive text, is snagged. Add some comment of your own, click the publish button, and the entry is automatically added. Blogger exerts no censorship or moderation over user’s blogs. It doesn’t even force you to have your blog on its servers. Savvy users can add their own design, and even publish pictures and music. Online publishing doesn’t come much simpler.

Before Blogger’s release in 1999, blogging was largely unheard of. What’s changed? Sherman Young, a multimedia lecturer at Sydney’s Macquarie University, attributes its popularity in part to a personal need to be heard. “There’s probably always been the desire to publish in an awful lot of people. Just witness letters to the editor in magazines and newspapers.”

Is much of the appeal of blogs that they give their author an unedited, uncensored voice (however small) in the public domain? “Absolutely … I think that as communications technologies [and] media technologies have progressed over the last 50 years, we more and more have resented the ‘gate-keeping’ role [of traditional media],” says Young. Another factor might be “a gut reaction to the homogenisation and conglomeration of the mainstream media”.

For many people, the appeal probably stems from the fact that a blog is a much more secure platform from which to speak your mind. It is a personal soapbox. A blog is not open to flaming or abuse from other users in the way a newsgroup can be.

Bowen says: “[My diary] has given me a sounding board on occasions, to rant to unknown people about my latest gripes, or stressful events of my life. At times I’ve obviously touched nerves in people, and got loads of emails back. I do read it back from time to time and have a little chuckle at whatever I was doing back then.”

Since he started it in 1994, Bowen’s blog has covered events such as the birth of his two sons, his career moves, overseas holidays and his divorce. “Originally it started as entertainment value, and I just wrote about whatever I thought people might find amusing. Since then I suppose it’s grown into more than that, and I feel that any significant event in my life has to at least rate a mention.”

Unlike most bloggers, Bowen does all his own programming. He says one of the big challenges this poses is the work involved when he decides to update the “look” of the site. “Tools like Blogger would no doubt make this easier, but just switching to something like that would be a job in itself.”

Young says tools such as Blogger and LiveJournal work thus: “Instead of having to know how to build a telephone, you [just] pick it up and dial.”

Another facet of blogs is that they serve as a running commentary on the state of the web. Many bloggers provide links to sites or even specific pages that interest them, often accompanied by a critique of the linked site.

Like many things on the internet, you can probably find a blog that covers just about any topic you dare think of. There are serious, issue-specific blogs, such as “802.11b”, which deals with wireless networking issues. Probably the most common is the personal blog, such as Bowen’s. A well-known blog is Rebecca’s Pocket, by Rebecca Blood, a leading blog theorist and author of The Weblog Handbook. Another is the journal of popular science guru Dr Karl Kruszelnicki.

Unsurprisingly, there are thousands of blogs devoted to sex and lifestyle. Then there are the more bizarre or irreverent blogs:

While not actually a blog, large collaborative projects such as The Hitchhiker’s Guide to the Galaxy fulfil a similar role. Started by the late Douglas Adams, author of the radio play and book series of the same name, H2G2 is in essence an encyclopaedia with entries submitted by “researchers” (users). Entries are checked by H2G2’s editors, going some way to addressing the problem of verifiability and accuracy that taints most blog-like sites.

An inherent problem with blogs is that they are by their nature highly subjective. They’re often short sighted and simply a reflection of what the author is thinking at a particular moment. This makes them a dubious source of news. Add to this the fact that, as with most online content, blogs exist in a kind of permanent present. There is no archaeological record of the internet; once data has been erased, it is almost as if it never existed.

However, this subjectivity can be a strength. Blogs serve as a counterpoint to the mainstream media. Among a great many other things, September 11, 2001, highlighted the role of blogs in peoples’ lives. People went to mainstream media sources such as newspapers and television networks, and to their online equivalents, to find news on the events. But it was to blogs that people went to discuss the events, to try to make sense of them, and to articulate their feelings.

The question in Young’s mind about the future of blogs stems from the “free” internet being, in reality, commercially subsidised. “Now that the subsidy is ending, now that people want to get their bucks back, what’s going to disappear? Is blogging going to be a victim, or will alternate models of providing those services emerge?” Blogger’s parent company, Pyra, at least appears to have found a viable business model. It’s based around charging for Blogger Pro, which offers extra functionality, and paid banner advertisements, which appear on user’s blogs.

It seems clear, though, that the future of blogs as a popular phenomenon depends largely on the existence of free, simple programs such as LiveJournal and Blogger. Internet users have been traditionally resistant to paying for services and few people have the time and skills to do their own coding, as Bowen does. If these services were to end, it seems quite possible that blogging would vanish with them.

But for the moment, blogging is surfing a wave of popularity that shows little sign of abating. Blogging is fast, easy and free, and it gives you your own e-soapbox from which to shout to the world your passions and thoughts – in fact, anything you want to talk about. Blog on!