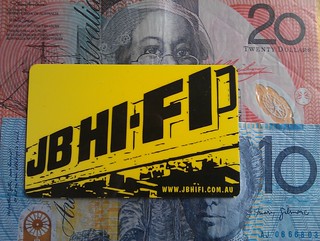 Among the presents I got for my birthday was a JB Hifi gift card. This always presents a challenge: what bargains can I pick up?

Browsing around the store one day, I found the two Harry Potter movies we don’t already have — the Deathly Hallows parts 1 and 2 — on Blu-ray, for $14.98, and on a two-for-the-price-of-one deal. Sold.

Here are the prices of some movies and other discs that are on my To Buy list… with a comparison between Amazon UK, JB Hifi and Ezydvd.

The dollar prices for Amazon UK above are with the VAT deducted, and the £1.49 per item delivery cost added. There is an additional £2.09 ($3.27) cost per delivery, which is why most people try and buy multiple things at once, rather than ordering items one-by-one.

But even with delivery costs, some of these items are ludicrously more expensive buying in Australia. It’s not hard to see why people are importing — and also not hard to see that while some retailers want 10% GST added to imports, it would make hardly any difference at all — not when in some of these cases Amazon will deliver it to you for a fifth of the Australian price.

The rise of the Aussie dollar has obviously played a part here, but this isn’t new… it’s been over 60 UK pence for about two years.

And I’m not saying the retailers are necessarily to blame here, but something somewhere in the supply chain for these products is obviously very fishy indeed.

PS lunchtime. Obviously the price differential is quite different for various products and types of product. I think I actually got a pretty good deal on the Harry Potter Blu-rays, and I doubt they are cheaper via Amazon… this of course makes it all the more puzzling. Ultimately someone in the supply chain believes that Australians shopping locally are prepared to pay higher prices than our UK friends… that, after all, is how the free market operates.

By the way, unlike for DVDs, the UK and Europe is the same region for Blu-ray discs as Australia (region B).

17 replies on “Given the price differential, it’s hard to see that GST on imports would make any difference”

wow! Those differences are incredible. So who in Australia is making the profit?
thanks for showing us – very fishy indeed.

It’s obvious the retails-want-gst is a load of nonsense. What retailers don’t realise, is for any significant purchase, if the difference was only the 10%, I’d happily pay it for the purchased to under Australian law, with the rights that gives me

It’s not just the price; the retailers want to increase the hassle factor as well. If GST is charged on overseas purchases, you would also have to go pay the GST (e.g. physically visit a post office?) before you could pick up the package. Much more hassle than simply having the package appear at the front door, and increased delivery time.

Holy crap! $25 for a whole Dr Who series????? I’m not very happy that you have shown me this Daniel…. I know where I will be shopping tonight…..

But you are right – there is something about price gouging that just can’t be justified, no matter what the argument….

Even if you take into account distance, smaller population etc – there is NO chance you would make up the 500% price difference… (well, 400% DIFFERENCE I guess….)

So your next project, Daniel, should be to visit an actual Jb hi-fi or Sanity shop in England, and see what their prices are.

And I suspect you will find that they are double the prices at Amazon UK.

What you are really looking at here, is the difference between bricks and mortar retail, and on-line retail.

You have to distinguish that distinction ( which applies here or the UK or USA or anywhere else ) from the “australia-monopoly-distributor-ripoff-conspiracy”.

The campaign led by retailers to put GST on international purchases under $1,000 failed for the reasons you outlined. However, the push is now coming from the states (the recipients of all GST revenue), who want GST applied to boost their tax base. I think this is much more likely to gain traction, given how GST revenue has fallen short due to households spending less (and saving more) while making more non-GST purchases (education, health, and overseas purchases in particular).

@enno, you’ve got to stop jumping to conclusions every time you comment here.

The JB Hifi prices are identical for their online store and their physical stores in central Melbourne.

I’m just back from 2 weeks in the US. Almost every single thing I brought I know I saved 50%+ on, including Australian brands like Roxy and Quicksilver.

I buy a good 80% of my things online, everything from shoes to makeup to dvd’s and clothes.

I’ve been home 3 days and have already put in a big Amazon.co.uk order for DVD’s I saw in Walmart and wanted (but wrong bluray zone) knowing that they’ll be cheaper than Big W prices.

I’d be happy be buy from an Australian store, but the customer service is non-existent (if not rude in most stores, people no longer seem to want to help you as a customer) and the prices ridiculous. Australian online stores have extremely expensive postage, so I’ll continue to buy online.

I’ve visited the UK three times in the past year and even their ‘bricks and mortar’ DVD shops are much, much cheaper than Australia.

As for here in Switzerland, I’ve found that if I do buy anything via Amazon (any country) or the Book Depository, the postman knocks on my door and demands a duty fee -anywhere from 30 Swiss francs upwards, thereby removing any ‘savings’!

@andrew: re the hassle factor on imports subject to GST, I think this is most certainly an issue. Although I haven’t been involved in it, the N10 form required at present for imports worth more than $1000 seems to involve some complexities, such as the requirement to provide a tariff classification. See http://www.customs.gov.au/webdata/resources/files/B374-Importdeclaration-goodN10-July10FinalTypeableversion.pdf
In addition, it seem that there is a processing charge (which I think is a minimum of $40.20) on top of the GST – see http://www.customs.gov.au/webdata/resources/notices/ACN0621.pdf
If the GST-free threshold were to be lowered, it would be nice to think that a simpler and cheaper process would be introduced. But what do you reckon the chances of that are? A trip to the post office might end up being the least worst option!

Daniel the US is still a viable and even cheaper source for Blu-rays – only a percentage of them have region coding on them (there are websites you can use to determine if the title you want is region locked). I’d say a good 70% of my collection is from the US, are region free, and play on my region B Blu-ray players just fine.

Only two titles I can’t get because they are locked plus not available here or the UK after all these years, Short Circuit and Jingle All The Way – every other title I’ve been able to get.

It should be noted the retailers aren’t profiteering with Blu-ray – the insanely high prices are because that’s what the distributor charges them. It’s only the likes of JB, Big W, etc that can get great deals on only specific Blu-rays… A $29 latest release at JB unfortunately has to see for around $40 online, it rediculous especially when a store overseas can sell it for a measly $20… :(

I used to work for a major discount department store and can confirm that margins are generally low on DVDs. In particular, I remember when the Dark Knight was released, it was being sold with a negative margin to compete with the other stores.

Of course it was assumed that customers would pick up other items in the store that would make up this loss before they went to the checkout, such as apparel, where margins can be as much as 75%. That’s why the DVD section is seldom at the front of the store. This is the same well known tactic used in supermarkets with milk generally being shelved at the back of the store as well.

A lot of foreign retailers would probably stop shipping to AUS if they had to collect GST from us. That is probably what the retail dinosaurs here are secretly hoping for.

@enno – I don’t think Daniel will have much luck finding a JB-Hifi anywhere in the UK. They’re an Australian company and the only other country they operate in is NZ.

Indeed JB hifi’s online prices are the same as their retail stores. Which means their online business is probably very poor, because people who want to buy online have cheaper options.

@ julian. Rolls eyes . Of course they don’t, but they have stores just like them.

I look after the foreign exchange dealings for a number of Import Client’s. Most are still pricing their goods based off the AUD/USD rate being at .7500
And they wonder why we shop online.