A lot of the talk around the need for a new east-west motorway claims we need a second river crossing. 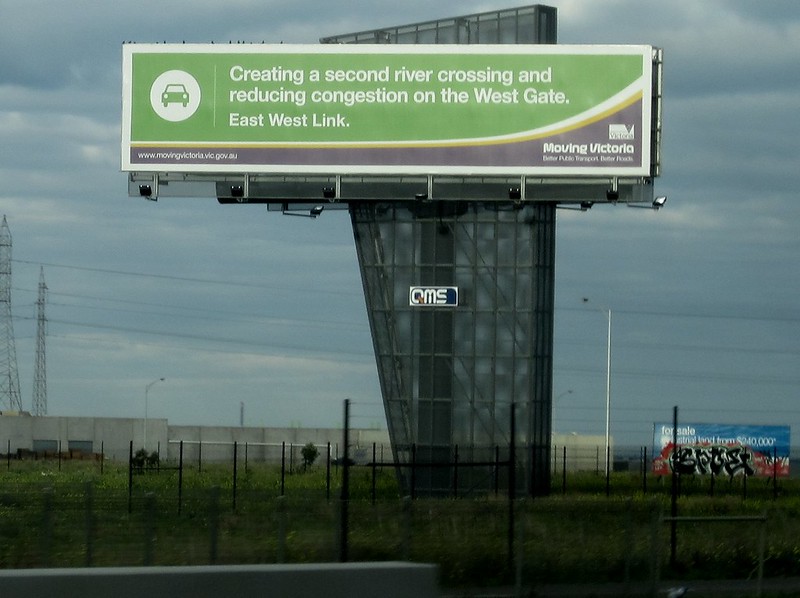 The issue with this claim is that we already have a second river crossing.

The first river crossing is, of course, the Westgate bridge — recently-upgraded (25% boost in capacity as part of a $1.4 billion project) but still full (thank you induced traffic) — 5 lanes each way. 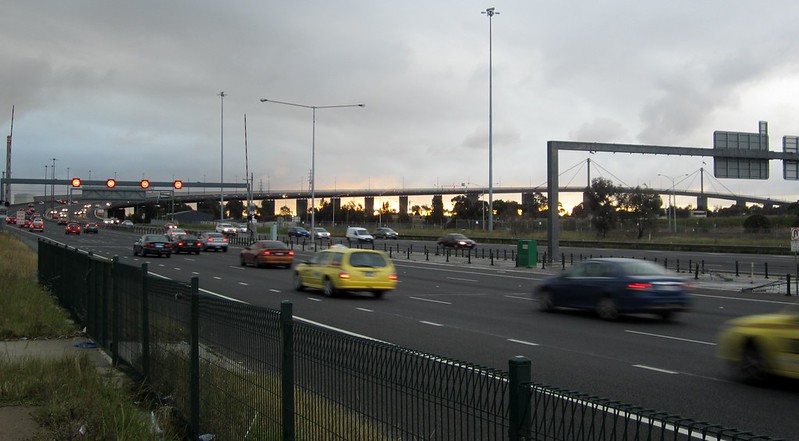 The second river crossing is Footscray Road. This is three lanes each way for most of its length, but where it crosses the Maribyrnong River, 2 lanes each way. 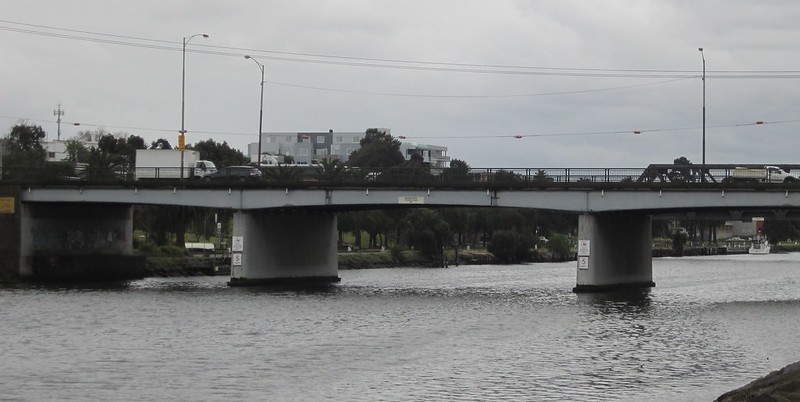 The third river crossing is Dynon Road, with 2 lanes each way. 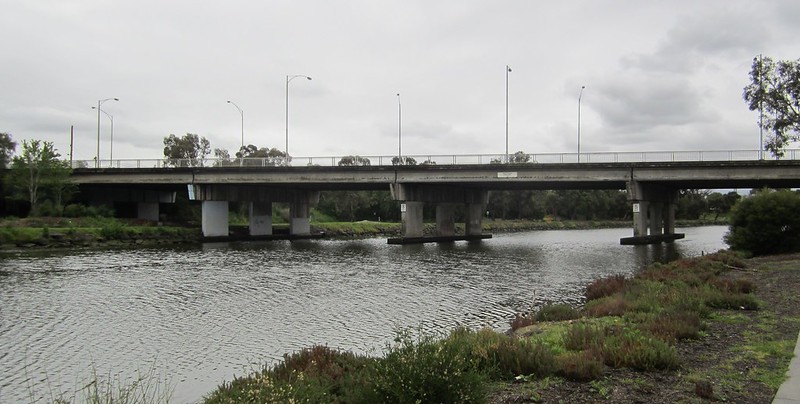 The fourth river crossing is Smithfield Road/Ballarat Road, also with 2 lanes each way. 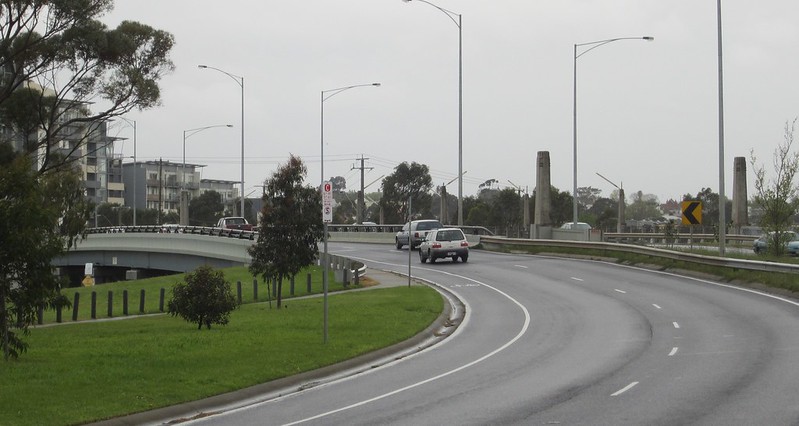 So while the call is for a second river crossing, in fact the existing second, third and fourth river crossings already together provide more lanes than the Westgate Bridge.

It’s true that none of these are motorways, and therefore they have traffic lights, but this hardly matters at peak times, when traffic clogs up and crawls whether or not a road has traffic lights.

Vehicle lanes have a theoretical capacity of between 1300 and 1800 vehicles per hour, and the latest Vicroads network performance monitoring report says that the average car occupancy during peak hour in Melbourne is 1.21 (PM peak; AM is lower).

If one assumed the top of the range, that’d be a theoretical 2,178 people per lane per hour.

(A little further north, but arguably outside the area of where the new motorway is wanted, are Farnsworth Avenue and Maribyrnong Road — adding a further 3 lanes each way).

There are more river crossings than just the roads. 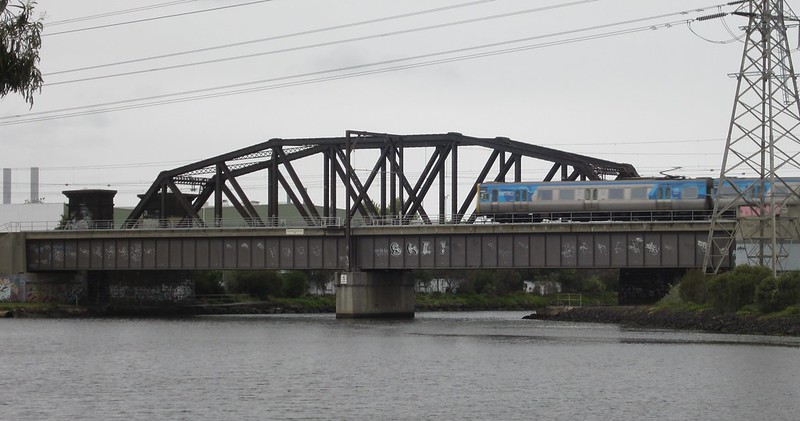 The sixth river crossing is the two track dual gauge railway line from Sunshine via the Bunbury Street tunnel, taking predominantly freight as well as passenger trains from Sydney, Adelaide and Albury — 1 track each way. 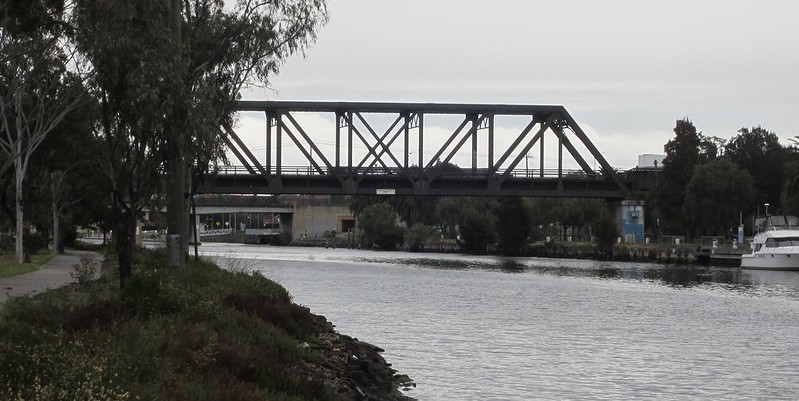 The seventh river crossing is about to be constructed: it’s the Regional Rail Link bridge that will take V/Line trains from Geelong, Melton/Ballarat and Bendigo off the existing four track bridge — 1 track each way. (Update: this opened in June 2015)

What’s the peak capacity of these rail lines?

Once the Regional Rail Link is opened, that will take up to 20 V/Line trains per hour, with about a capacity around 300 people each = 6000.

(V/Line train capacity varies with the length of the train. Precise passenger numbers are here for Geelong, Ballarat, Bendigo. In all cases, capacity can be increased for the shorter trains by adding more carriages, such as those about to be freed up when the Sunbury line goes electric, and more to be added with the new order of V/Line carriages.)

The slots on the suburban lines can then all be taken by suburban trains. These tracks are signalled for trains every 2 minutes, but the general rule of thumb is to use 80% of the theoretical capacity, so 2 tracks x 24 trains = 48 trains per hour. Even that At an average “desirable” figure of 800 per train = 38,400 people per hour.

(In practice in peak hour some trains have more than 800, some less. No exact figures are public, but a summary is in the load surveys.)

A theoretical total then on the three tracks of 44,400 people per hour, or about double all of the road capacity (and not counting the trains using the Bunbury Street tunnel, which bring in more people on a small number of additional trains).

But it’s needed for freight!

Freight? If freight is such a priority, why are there no truck-only lanes on the existing motorways, to ensure individuals in cars don’t delay freight? On the contrary, some of the freeways have lanes where trucks are specifically banned.

If freight is such a priority, why is there no proposal to build this new tunnel as a freight-only route?

And as I’ve noted before, if freight is a priority, and we’re not just building another road to bring more cars into the CBD, why did the original artist impressions clearly show cars heading to the CBD? 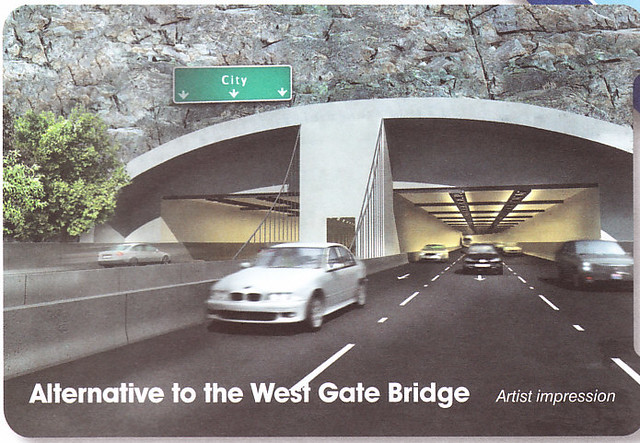 The general consensus seems to be that this tunnel won’t be fully funded by government due to the huge cost. Private enterprise would have to be involved, and they would inevitably push for it to be built with city exits — to encourage car commuters onto it to generate more toll revenue — which would result in more cars clogging up the inner-north and CBD. Marvellous.

So, where to from here?

Road capacity can be increased by widening existing roads and bridges, and/or by building the $10 billion road tunnel. Like every motorway before it, it will inevitably fill with cars, increasing overall road traffic.

Rail capacity can be increased by improving rail operations, upgrading signalling (to improve track capacity), extending train lengths (particularly V/Line, but also in the longer term, metropolitan trains), new more efficient designs of trains (without intermediate cabs, for instance), and adding tracks (anything up to and including the proposed $5 billion metro rail tunnel).

But as the figures above indicate, it’s a lot more efficient to move large numbers of people by rail. Importantly, existing rail capacity can be harnessed by giving outer-suburban residents better access to stations at the start (and end, if necessary) of their trips: in particular, better more frequent connecting buses, better walking and bike facilities at stations, and of course more frequent trains all day (minimising wait times no matter when you want to travel).

Like other recent public transport upgrades, the more you improve the service, the more passengers you get, moving more people more efficiently and sustainably than in cars.

As I said last week: Do we want the next surge in travel growth in Melbourne to be in private vehicles, or sustainable modes such as public transport, walking and cycling?

Which should we be aiming for?

12 replies on ““Second river crossing”? We already have seven.”

Your first link specifically talk about a second *Yarra* (not River) crossing, but then all of the bridges that you mention are crossing the Maribyrnong. And then you don’t mention alll the other existing Yarra crossings, so I’m a bit confused…

How about the Bolte Bridge, that crosses the Yarra River and Victoria Harbour?

That’s because the Yarra curves around to the east so when the road is a certain distance north of the bay, it doesn’t have to cross the Yarra, but it usually has to cross the Maribyrnong.

@Mike, point taken. The issue is they frame it the wrong way. It’s really about roads heading west (across whatever river). There is no credible plan for a second Yarra crossing to the west. As @Philip says, the relevant river crossing is the Maribyrnong.

@Josh, if you take the Bolte across the Yarra, you still have to take one of the other bridges to head west.

Interesting points, although perhaps Footscray Road and Dynon Road aren’t the most useful connection points — you just get dumped into Footscray, and then have to zig zag your way through it. (The source of the truck problem in the in the area.)

Perhaps the Port of Melbourne or whichever relevant authority/company might put some money into a freight-only tunnel heading west (and perhaps a better link onto CityLink.) if freight is such a big deal. There are, of course, other ways to move freight other than on trucks. Some lateral thinking around more frequent, smaller freight trains and optimizing container transfers might help.

Freight is definitely a big deal. Everything material that we produce or use has to be moved, and it can’t be moved everywhere on trains – it does need to be moved on roads from rail depots to and from the freight generators. Private vehicles can be more easily eliminated from traffic than freight vehicles can, and this is achieved by improving public transport. If there wasn’t a morning commuter peak hour, or if it was far less congested than it is, freight would be able to use the existing roads more efficiently.
To build another road instead of improving the capacity and operation of the rail system is to encourage more commuter traffic on the roads, making freight movement even more difficult than it already is. I believe that is part of the point Daniel is illustrating here.

That artists impression of a tunnel looks bogus to me.

To build a tunnel, you either dig a trench and then build a roof over it, or you drill a tunnel.

A bored tunnel isn’t six lanes wide with a flat roof over it. They are usually round, and if you want six lanes you’d have to build at least 2 of them.

And a tunnel in a trench doesn’t have a huge wall of rock over the top of it.

There could be improved connections between the port and the regional highways. Two things I would suggest, are a bridge between Coode Road and Whitehall Street, to get more trucks out of Footscray and off the Footscray Road Bridge, and a better connection between Hyde street and the West Gate Freeway.

I’m not abreast of the stats, but it does sound plausible that if PT is improved, more people will use it. It’s a dilemma that the SA Government have been juggling with for a long time too. Yet, no matter what they do, it doesn’t seem to work.

I think a more pragmatic solution would be for people to lower their expectations and start doing what is right and sensible – catching public transport and walking / cycling when they can. (What an uncool thing for me to say, hey?)

Speaking of freight and the truck congestion issue, I see Lindsay Fox every now and again brings up closing the Port of Melbourne and moving the lot to Hastings, sort of trying to sound a martyr by partly blaming trucks on the Westgate corridor …
http://au.news.yahoo.com/video/national/watch/af92f6a1_6432_3aa8_b868_ccc9d96c1342/248154/

Given the Bunbury Street tunnel carries the interstate standard gauge links to Sydney and Adelaide I would have thought Hastings would be the biggest discouragement to putting freight on rail, particularly given the only rail corridors are broad gauge, full of level crossings and heavily used by suburban operations. The result would be many more trucks dumped on the Monash-City Link corridor every day.

After substantial land decontamination efforts before any development at the Port of Melbourne I’d doubt the land value would fund the billions for dedicated standard gauge lines along the Dandenong or Frankston corridors and (somehow) through the city.

@enno – the tunnel portals would be cut and cover before diverging as bored tunnels deeper under Footscray according to that plan. The Burnely and Domain tunnels were built as cut and cover to around St Kilda Road before diverging as bored tunnels. The Domain tunnel under the Yarra actually goes through the bottom of it and is anchored down to prevent it floating. Also the City Loop tunnels were cut and cover near the portals (noted by them being box sections) before being bored deeper down (the main tunnel lines are circular section)

The Bunbury Street tracks are actually bidirectional, so you could have two trains coming into Melbourne at the same time if you wanted. The problem is that there’s only one track from Tottenham towards both Seymour (Sydney) and Adelaide, and at the city end those two tracks split into one each for Melbourne Docks, North Dynon, South Dynon and Southern Cross (total four). So you could have simultaneous Adelaide-Docks (freight) and Sydney-Melbourne (pass) trains.

When Rotterdam planned on increases in freight coming through the port (largest port in Europe), they knew there would be more truck traffic – even though they move as much as possible by rail.

Did they build more roads? NO, they built a new subway to get passenger cars off the roads.

We could learn from the Dutch.