Wednesday brought with it the shock of two separate fatal level crossing accidents on the Frankston line; the first at Edithvale, the second at Mckinnon. The second in particular resulted in the busiest part of the line being closed over peak hour, and massive disruption for those caught up in it.

For a taste of the disruption, one only need look at this claustrophobic picture from The Age showing the underpass at Caulfield station, and passengers trying to get to the replacement buses: 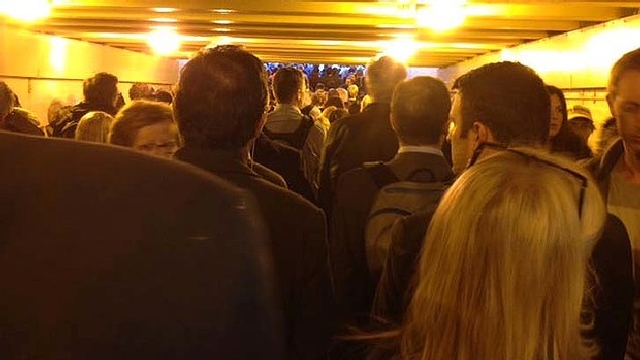 The reason for long delays is that investigations following such an accident typically seem to take about 4 hours, and for Metro to get buses into place (or even find buses) can take some time.

It was a similar situation for our friends in Brisbane last night, when a truck hit a boom gate and power lines, knocking out the Caboolture line. 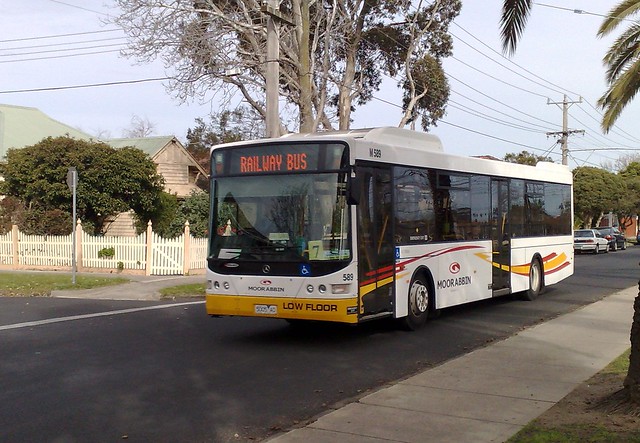 I’ve said this before, but I’ll say it again: it is worth a little research before the event to find out your alternate routes. On Wednesday it was important I be home in a timely manner, and I made use of a parallel train line and a connecting bus across to my suburb.

Many of those buses are only every half-hour on weekdays, and many take long circuitous routes to get where they’re going, making it worth checking the timetables and seeing if they are still likely to be quicker than the long wait with crowds for rail replacement buses, particularly if you’re travelling just after a disruption has commenced.

Of course, it wouldn’t work if everyone changed their trip, not in peak hour, but that seems to be unlikely.

I won’t document the Frankston line — the busiest part from Caulfield to Cheltenham is well-served by routes from the neighbouring Sandringham line and Dandenong line, and many stations on the inner section have trams available.

Here’s a tricker example: the Werribee line — which is not served well by alternate routes from the city. Taking a look at the local area maps, I can see quite a few buses within walking distance of stations:

Important update 2014: The information below may no longer be correct; it is for illustration of the point only. This web site is likely to be more up to date, but for latest info use the official PTV web site.

Spotswood — bus 472 from Footscray, or bus 232 from Queen Street

If there’s a disruption beyond Laverton, it probably (hopefully) won’t affect the line between Laverton and Footscray, since Laverton is capable of being a termination point for trains. This means you’d be wanting to try and get to Laverton then catch a bus from there.

Get the idea? Now, I should emphasise that the info above was gleaned from a quick look at the maps, and (just like the maps!) may not be comprehensive or accurate, and that it’s important to check timetables and see if your alternate routes actually run when you want to travel, how long the wait will be and how long the trip will be.

My point here is that almost every station in Melbourne has or is near to some kind of connecting route from either another rail line or a station closer in on the same line. And remember, even getting dropped a 20-30 minute walk from where you want to be may be less stressful and time-consuming than waiting for replacement buses to turn up.

So I say again (on the basis that only a tiny proportion of Melbourne PT users will see this post!) — do a little research before it happens. Find out, and write down (perhaps in a PostIt note for your wallet) what some alternate routes home are. It might save you some time, and some sanity, the next time your rail line suffers disruptions.

7 replies on “The lesson from Wednesday: Know your alternative PT routes”

A good piece of analysis, Daniel. thanks.
In general, the further you live from the city, the fewer alternative PT options exist.
I betcha there were many wives/mums at home who got a call on Wednesday night: pick me up from Sandringham/Clayton station.
I feel sorry for those with limited physical mobility – difficult for them to walk 5km.

@Philip, hmm yeah maybe I’ve picked up an Americanism there. (At least, that’s what the online dictionaries suggest it is.)

This comment may be politically incorrect…. but have the number of suicides on the railways increased since the barriers were erected on the Westgate?

It certainly is a good idea to know the alternate routes. I took the train to see the Blue Mountains snow yesterday. Coming back, there are seven different methods to get to my place, requiring between 2 and 4 trains, the shortest route actually takes the longest time because I didn’t realise there was 30 minutes between trains on one part of the route. I changed my plan 3 times on the way.

There is something odd about getting off a train, discovering that the next train you want to catch isn’t coming for 25 minutes, so catching a train in the complete opposite direction is going to work better. Thats a conundrum you usually don’t have in Melbourne.

Think like the terminator in T2 when he re-routes to a back-up power supply. Luckily I have four different tram routes that go near my place plus two train lines in walking distance, and people living in Northcote think they have good public transport options – pah!

Recently I have also been getting the late night bus home from Oakleigh as although it is only three stops, I do not want to be on the late trains going into the city on weekends. The bus arrives at the same time as the late train, but is much safer (I once spent 1/2 an hour on the phone trying to get a taxi at Oakleigh station.)