About an hour ago at Highett station: the train to Frankston had just left, and a city-bound train was approaching.

This idiot cyclist rode across in front of the city-bound train. The train driver tooted his horn loud and long. The cyclist entered the station, and appeared to want to catch the train — I’d be surprised if the driver didn’t verbally berate the cyclist over the PA. 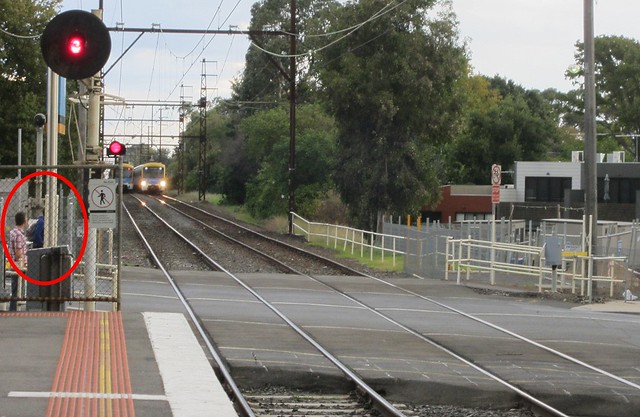 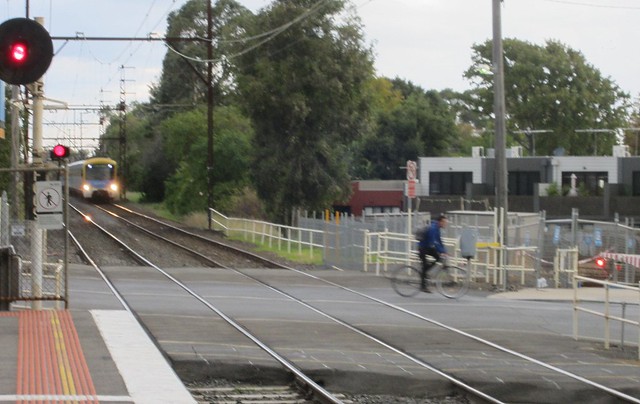 Once when I was much younger I did something that could’ve won be that award. The tram driver got out of the tram and walked me off the road, very deliberately not letting me on.

So the train is a couple of hundred metres away and clearly visible. Its speed can be easily judged. Its path is absolutely certain. The point at which the trajectories potential intersect can be easily identified and is small in extent, since the trajectories intersect at about a 90 degree angle.
Compare that with riding on the ordinary road, with trucks coming up behind you are unknown speed, wandering around on the road, driven by an idiot who may be on drugs, and passing you over an extended zone with less than half a metre clearance.
Makes it clear who the real risk-takers are.

The train was clearly visible to me. It is less obvious that the cyclist bothered to look. Certainly if he had fallen, the outcome would not have been pleasant.

Boy if that warrants a blog post as well as being labelled an idiot I would hate to think what you would do if the train was actually close.
You would have a heart attack every minute if you went train spotting around half the planets on the globe.

Perhaps you need to appreciate how fast it was moving. Shame I didn’t have the presence of mind to hit the video button instead of the still button on the camera.

Daniel
I see peds and cyclists do that all the time near where I live. Some teenage males. Sometimes middle-aged women.
I got better things to do than attend a coroners inquest. Hope I never have to.

I didn’t think red lights applied to cyclists in Australia. Good to know its not just Sydney where cyclists are exempt from normal road rules. We should start a campaign to protect cyclists because allowing them to go through red lights and train barriers without the protection of 10 airbags and a metal box around them seems kind of dangerous.

as a cyclist I’d imagine that having started to cross the intersection it would have been suicide to even attempt to stop half way … looking at the image I don’t imagine that he could have seen the oncoming train before he set off anyway, since it would have been obscured by the departing one – and the oncoming train horn could be interpreted as from the departing one if he hadn’t looked … I’m not saying he’s right, however … boomgates are still down, so that should be a fscking big hint …

Boom gates/barrier down = do not cross.

It’s all about stopping distance, and the inability of trains to stop in that short a distance. Further, the driver might feel impelled to try to save the worthless life of the cyclist, and brake as hard as he could. There’s often people that have to stand in trains, and sudden braking is likely to injure them.

Cyclists on Sydney roads seem to all have a death wish, maybe it’s an adrenaline thing?

Let’s get one thing clear, this bloke might have seen the train and known he could make it across. What happens if he comes off his bike? He has absolutely no time to respond, and the train will have made mince meat of him.

What happens if someone sees this drongo, then walks out after him?

All fine and well you can see the train, but we can’t stop on a dime, at the crossing the train would have been doing ~55km/h on it’s approach to the platform, that’s IF it was a stopper. If it was express, the track speed is 80km/h. Had the train been a stopper, and the driver hit the emergency brake where he was in the above photo, the train would at guestimate pull up two cars into the platform, with the rider and his bike in a hundreds of pieces underneath.

I have had my own near miss with a cyclist, similar circumstances, but at a pedestrian crossing, he was a lot further away though. He came off, and lucky I was far enough away to stop about a car length short as he picked himself up and selfishly rode off without even acknowledging me.

Waiting for the train will not kill you.