I’m always amused when one of the newspapers crows about the latest circulation figures.

THE Sunday Age continues to be the best-performing metropolitan newspaper in Australia, according to the latest circulation figures.

The newspaper recorded the best year-on-year growth to September 2011 of any daily, Saturday or Sunday newspaper in the country.

It takes a particularly selective use of the figures to come up with the headline “outperforms the rest”. In the article they quote the Sunday Age’s circulation of 228,826, but fail to mention the circulation of their competitors. 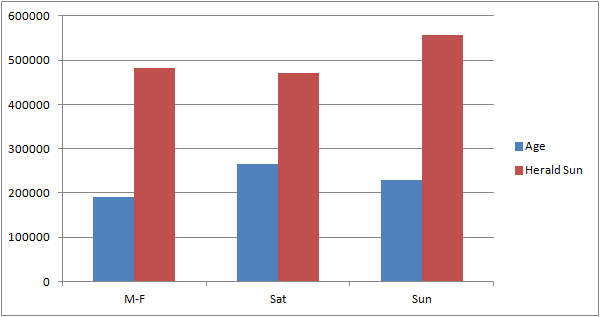 The figures were all published last week. The Age is outstripped by their main competitor in Melbourne, the Herald Sun, every day of the week.

While it’s true that the Sunday Age is growing in circulation (by 2126 in a year apparently), I think it’s rather optimistic to claim it “outperforms the rest” when it’s only selling 41% of the competition, and at this rate of growth (and the current rate of loss for the Sunday Herald Sun), it’ll take another ten years to get equal.

Perhaps they can say that they outperform all other broadsheets.

Well spotted!
Also, the Herald-Sun is claiming that more people go to its website for news than to The Age website. Not sure if this is true.

@roger, a graph at Hitwise shows the Age, SMH and HS are all pretty close, and way ahead of anything else. As of September it appeared the Age was still just ahead of the HS, but maybe that’s changed in the last few weeks, given the HS was on an upwards trajectory.

Of course it may all change when/if the HS adopts the News Limited paywall (which The Australian switched on a couple of weeks ago).