Transport For Victoria have quietly put out a map and plan for the rail network for 2025. It’s dated June, but I hadn’t spotted it before.

Well, I say plan… it’s only a ten page brochure (eight if you exclude the covers) mostly summarising projects that we already know are fully funded: 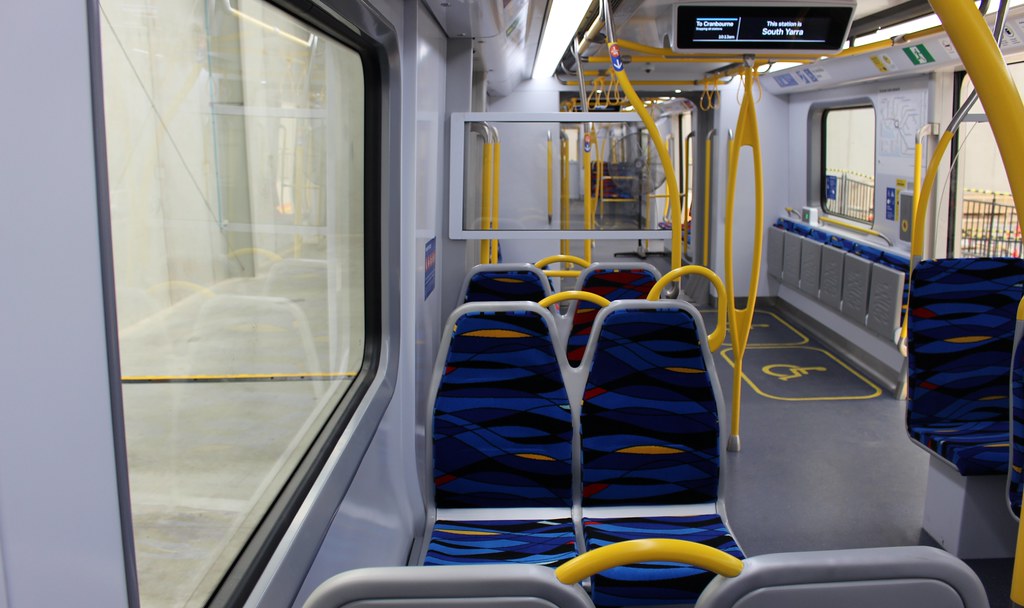 In comparison the 2012 plan, which covered metropolitan rail only, was 144 pages. So this one is scant on detail.

It does vaguely mention the prospect of all-day frequent services:

The Major Transport Infrastructure Program is delivering a series of projects to transition the network to a ‘turn up and go’ service, which will deliver:

…which on the face of it sounds good, but there’s no public plan of how and when this will happen, other than that we know the network infrastructure will be able to support it. (And besides, most of the rail network supports this right now.)

Marcus Wong recently noted that the business case for the Metro 1 tunnel didn’t even include anything better than a 20 minute frequency to stations west of West Footscray. The government rang me to say that’s just a “base case” and not a service plan. But it’s not surprising people assume it is a service plan when it looks like a service plan, and there’s no other public documentation available.

And then there’s the rail map. They’ve published a 2025 version that shows how it’ll look once the Metro 1 tunnel is open. (View it bigger or go to the original PDF) 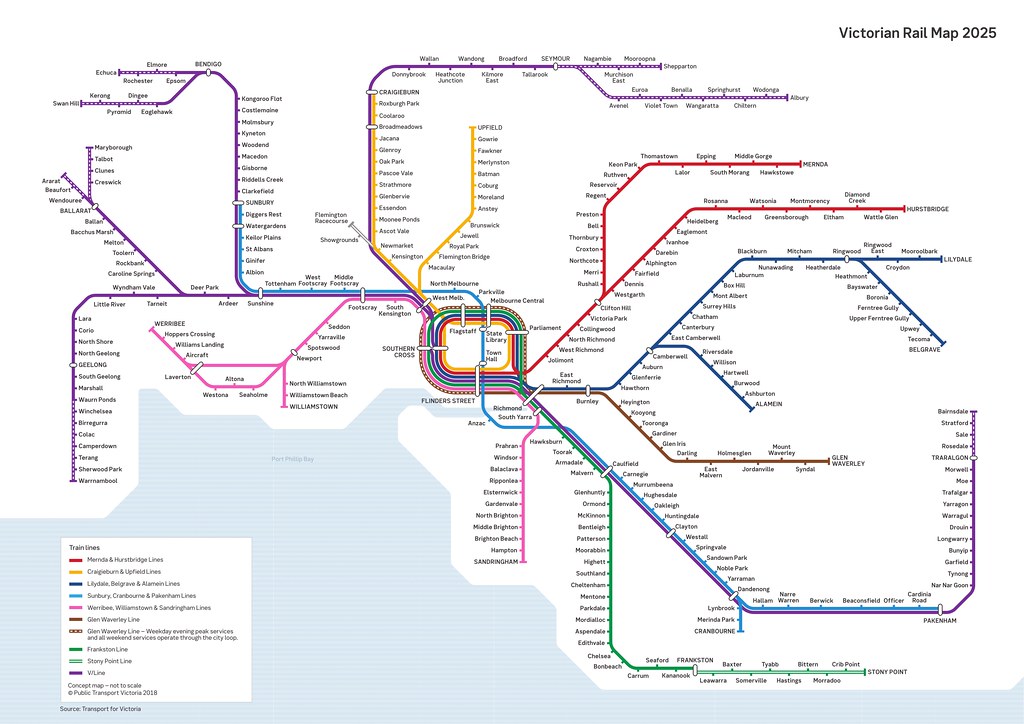 State Library and Town Hall are shown as distinct stations, but with connections to Melbourne Central and Flinders Street.

What’s interesting is what the map doesn’t show. They’ve apparently not committed to removing Glen Waverley trains from the Loop, even though it’s obvious that as frequencies increase, they’ll need to do so. Myki on long-distance V/Line? Not clear. Melton/Wyndham Vale electrification? Also not shown.

The document does mention the latter, and other upgrades in passing, without any timelines, providing something of a shopping list for the politicians as we move towards the State Election.

Metro 2 is not mentioned, and there’s only a brief mention of accessibility.

It’s good to see them looking ahead… though I’d hoped to see something that showed a bit more detail around all day service frequencies. These are vitally important to how people can use the train system. The Coalition has made a pledge (but it seems a bit wobbly as it’s not in writing anywhere), and Labor are yet to talk about it.

The current, mostly every 20 minutes, train service doesn’t cut it in a city of almost 5 million and growing, especially in the face of growing motorway expansion that will worsen congestion. Let’s hope we see this change sooner rather than later.

Thanks for sharing and your commentary.
I totally agree that 20 minute frequency is inadequate. It makes the car a better option on weekends and after 6pm on weeknights.

And still no mention of the Rowville extension….

Also no mention of an airport line…

What’s the basis for your thinking that a “turn up and go” service can be provided? You say that “we know the network infrastructure will be able to support it.” That does not ring true to me. Take the Werribee line for instance. The critical level crossing at Hoppers Crossing is not on the list of 50 to be removed. This is a very busy crossing with a major hospital nearby. It would be very difficult to introduce more services on this line without nearly closing off traffic.
To my thinking, the level crossing removal program is a huge opportunity lost, squandering billions on the wrong projects. It seems to be more about ticking boxes, on the quick and easy crossings, for example the one on the Altona line – the least-used set of tracks in the entire metro area, it’s an unreliable 20-min service! – rather than about real improvements to congestion* and public transport services. How many level crossings on the list of 50 will be seeing more train services? (*PS. the ‘congestion’ benefits are minimal, see the LXRA’s own research post-removal of 10 level crossings. The only way Melbourne can tackle its congestion is with p/t improvements.)

Gregory: That’s because of capacity constraints on the Dandenong rail corridor. It has been downgraded to light-rail.

Jon: I believe this draft plan was produced before the Airport rail commitment. Now it’s gonna open alongside with the Metro Tunnel.

It’s still ridiculous that the Overland service to Adelaide isn’t included on the map – you can buy V/Line seats on it to stations like Horsham and Stawell, for god’s sake. It’s only twice-weekly of course, but how can that service grow if no one knows its exists? Just needs a dotted line to indicate lower frequency.

And of course the XPT to Sydney should be indicated too.

Where are all those people going to go when some government builds those expensive tunnels and shuts down that part of the freeway for 5 years? How will they get to work? Doncaster rail is a must!

The Andrews Government announced in late April/May the light rail. Then the Federal Government announced 475M for the first stage of heavy rail in the budget a week or so later.
I think Daniel and others have consistently established that capacity on the Dandenong Corridor was a furphy in relation to this line extension.

But even if not. The current work on the Dandenong line- including the signalling upgrades, level crossing removal and the new high capacity trains that enter service from next year are the capacity issues that needed to be addressed- as referred to in the 2012-4 Rowville line feasibility study.

There would have been PLENTY of line capacity if the CD9 had been done as a quad service. There is still room for service, but it’s tight.

Another idea is extending the alamein line to Malvern East or Darling, Chadstone SC, Huntingdale, then Monash and Rowville operating independently of the Ringwood and Dandenong lines. Could even be extended underneath East Camberwell along the old outer circle to Clifton hill.

Pie in the sky thinking yes, but way, way, way more beneficial to our PTV network than a light rail that replicates the 900 bus. (Plenty of students currently take slow busses up blackburn rd to blackburn and syndall, instead they could take the train from monash at connect at Darling or Camberwell.)

Yes Metro 2 from my perspective should be the highest priority infrastructure project in Victoria. Its benefits would be huge, far greater than any freeway, and surely cost cannot be an excuse because almost double the amount is being spent on freeways. Has to start soon!

A part from the bigger project Not in then map mentioned by others I would hope that extra stations like Davis And Mt Atkinson will be built by 2025 on the Geelong an Ballarat lines.

It’s bad enough the Werribee line (including Altona) gets 20 mins service at off-peak, but the Altona loop gets 22 mins service at peak even after the Kororoit Creek Road level crossing removal.

The Werribee line can handle 5 min frequencies as shown with extended services during the level crossing level removal works. It could do that if we forego the express between Newport and Footscray.

@Anna, a 10 minute frequency is currently provided all day today on 2 lines (Frankston/Dandenong) weekdays, 3 lines (+Ringwood) weekends. Level crossings don’t jam up because this is far fewer trains than peak frequencies on most lines, and road traffic levels are lower as well.

Crossing removals should continue, and Hoppers is a good candidate. But 10 minute trains shouldn’t wait for this to happen.

20 MINUTE FREQUENCIES?? Maybe if this was 15 years ago… I live in Perth, which is MUCH smaller than Melbourne yet we have the highest frequency train service in Australia (5 mins peak, 10 mins off-peak, 20-30 min late night services on Joondalup/Mandurah Lines), only to be succeeded in 2025 by Sydney Metro. 20 minute train frequencies during weekdays is a thing of the past. Time to speed up, Melbourne.

Also missing the extension to Donald

Gregory
Yeah the Federal money for heavy rail to Rowville seems too little. State gov is committed to light-rail which is much easier to implement and can be done much sooner. So good for the short-medium term.

A heavy rail to Rowville would require significant quadding along the Dandenong corridor and a bunch of tunnels and elevated rail. It would cost into the billions. Not sure if the budget can’t afford it unfortunately, even with Fed support, right now since it’s all going into Airport rail.

I’m not sure though, would it better to invest Metro 2 & Doncaster line or Dandenong quad & Rowville line? That’s an interesting question?

@Ryan, obviously I’m not in Perth, but the last time I looked none of the lines had 10 minute frequencies off-peak. It’s 15, and mostly 30 after about 8:45pm. Mandurah line timetable

What’s good though is the 15 minute standard includes all lines, and weekends.

I visited Perth a couple of weeks ago, and was impressed with how the PT system has advanced since my last visit in about 2005. Points that impressed me were
– signage for buses at train stations (don’t need to look on your phone, bus maps and timetables are on display)
– quality of the bus-train interchanges (Melbourne designers could learn a lot here)
– the CBD bus terminals
– the underground line under construction to the airport at $200m/km, whereas Melbourne is paying $1b/km
Perth seems to get a lot more infrastructure for its dollar than Melbourne. For example, the Mandurah line was built for about $1b between 2004 and 2007, of which $300m was the CBD underground section, $300m for 70km of electrified double track and 9 stations, and $300m for new trains. This is also somewhere engineers fro Victoria could learn. For example Melbourne Metro 2 could be built a LOT more cheaply per kilometer than Metro 1 if land for the Fisherman’s Bend stations is designated early and built as “brownfield” sites, rather than retro-fitted like our Town Hall station on Metro 1. I believe this is how the Perth Airport underground is so much cheaper, because the stations are on brownfield sites that were designated a long time ago.

It is shocking that the map shows no connection between Upfield Station and Craigieburn Station.

The map should show a green oval next to Flemington Racecourse Station.

How frequent will the Geelong to Melbourne ferry be?

The Avalon Airport runway should be shown given that Air Asia will stop flying to Tullamarine from 5 Dec 2018 onwards:

I hate how airport train stations are underground – I think the one at JNB airport is overground along with the one at BNE airport.

There is a disused double track railway that goes from Geelong to Ballarat – perhaps they can build an O-Bahn on it?

Two main thoughts on this:
– I’ve always preferred ‘Toolern’ to ‘Cobblebank.’ I do get why they went with the latter name, tho.
– There’s no connection shown at South Yarra for the MMT. The details behind this end of the tunnel have always been shady, but it would be idiotic to not at least provide a connection there.

You whine so much melburnians. Here in BEndigo we get trains every 45 minutes. feel glad you have the frequency.