Hotel buffet breakfast at the Sheraton is an eye-popping $44 per person. This is no big surprise – hotel breakfasts are always expensive.

But they’d said at check-in that we had a $50 credit, so that took the cost down to $38 for the two of us, which is probably cheaper than if we went out somewhere for breakfast. So we dined in — and very nice it was too.

Three course breakfast? Why not! That’s okay — we would end up walking all day.

The locations plotted on my Google Maps timeline for the day aren’t quite right. At no point did we walk on water, for instance. But given the glorious weather, we did explore extensively on foot — and all within a few kilometres of the hotel. 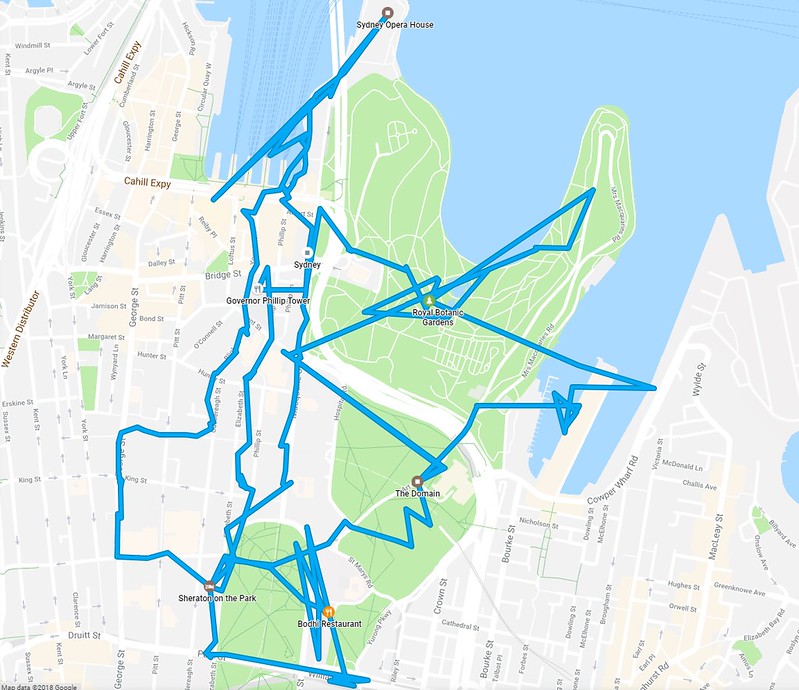 Heading out of the hotel, in Hyde Park we found preparation for the Sydney half-marathon, and this bloke from a backpacker tour group, minding all the bags while his compatriots were evidently elsewhere. 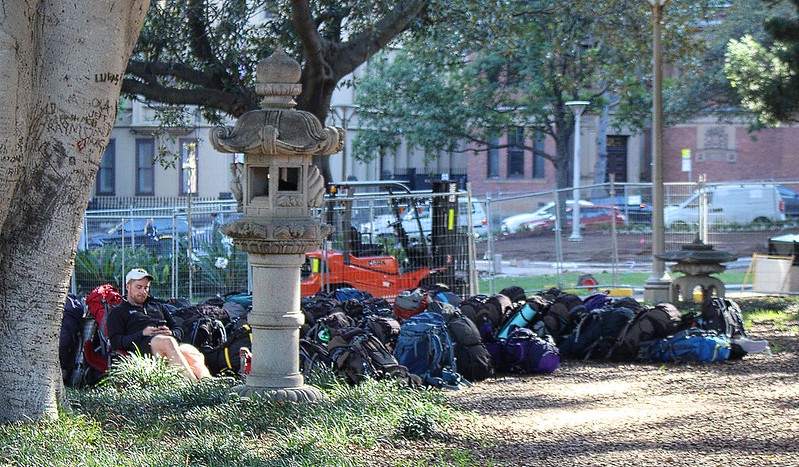 One lesson I’ve learnt over the years is that if there’s a particular impetus for your trip, then if possible get that thing done as a priority. Just in case.

So we headed straight to the Art Gallery of NSW to the Lady and the Unicorn exhibit.

When M had mentioned it to an acquaintance who had never heard of tapestries, it was apparently interpreted as some kind of culinary event. Apparently tapestries are delicious… because they’re closely related to tapas. 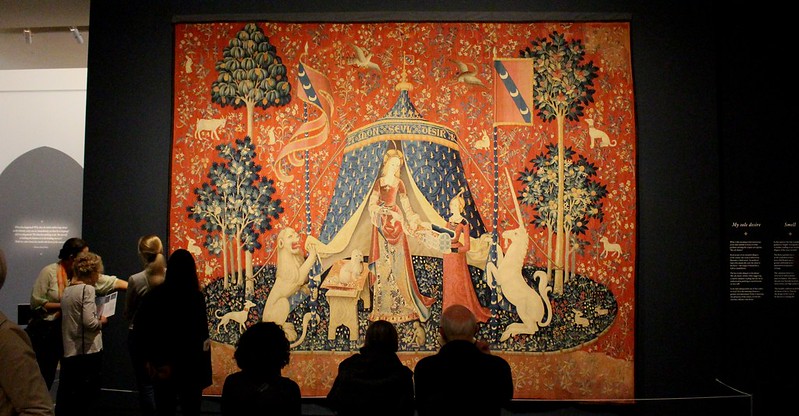 We’d booked for 10:30am on Friday in the hope that being early on a work day, it would be quiet. It wasn’t — busloads of retirees seemed to be coming in, and as we looked around, it got busier and busier. Still good though; if you’re in Sydney in the next month or so, get along.

We pondered also looking in at the Archibald finalists, also on display. The queue just for tickets was getting long, and we could see that inside it was very busy, so after a look around the gallery shop, instead we headed out for more walking.

First up to Mrs Macquarie’s Point, where spectacular views were to be found, and we joined in the other tourists at snapping away at the Harbour Bridge and Opera House. 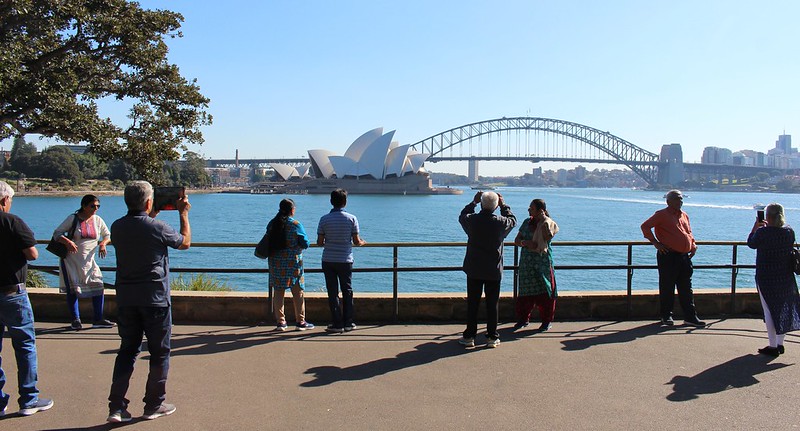 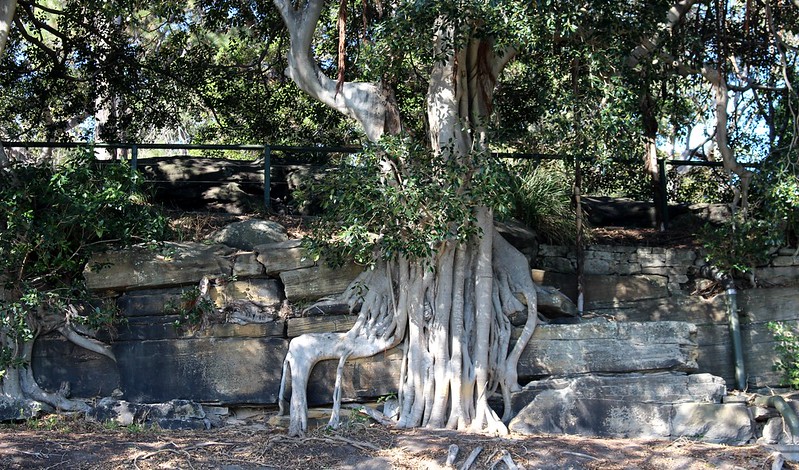 At some stage my phone lost its data connection. Odd – I don’t recall that happening before. There was some confusion getting it resolved, as when I had WiFi, I checked Telstra’s outages page, which said there was a fault in the area. Telstra’s people on Twitter however suggested rebooting, which turned out to resolve it. 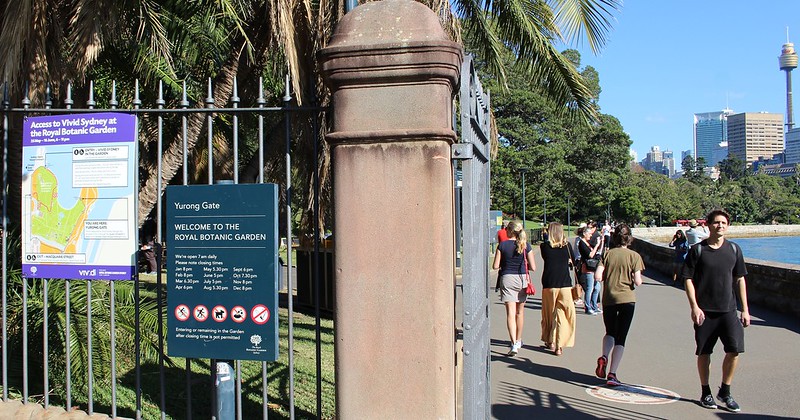 This VMS was flashing messages for the forthcoming Vivid festival, so naturally I snapped on particular message. 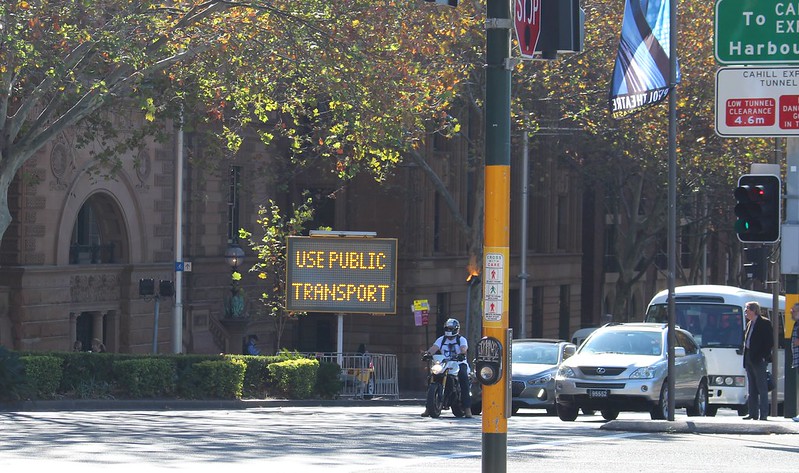 On a recommendation of a friend, we had lunch at the Governor’s Kitchen, the restaurant adjacent to the Sydney Museum.

One delicious yet relaxing lunch later (well, apart from perhaps a little too much traffic noise), we headed back to the hotel for a bit, then out into the CBD proper along George Street.

George Street used to be a wall of buses at peak times, but currently it’s being dug up for the light rail project.

As you can see, they use concrete blocks for bollards in Sydney. Except unlike in Melbourne, these don’t appear to attract litter or decorations. 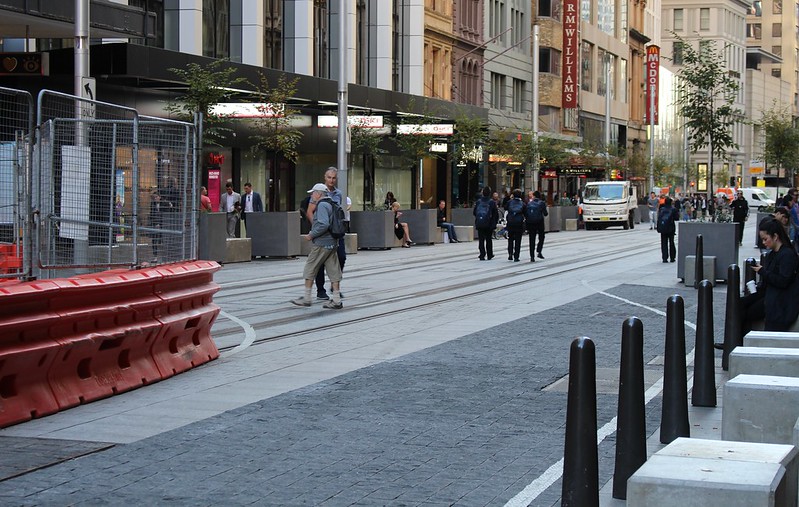 Some commenters from Melbourne who may or may not be fully informed have noted that while Yarra Trams might not be perfect, they’d have had the whole thing done and dusted within weeks. Witness the diversion/reconstruction of tram tracks along St Kilda Road – it took about two weeks.

Mind you the George Street design includes wireless technology — the tracks have a conductor rail that will pass power into the trams as they pass over. This probably means more construction impact under the tracks, requiring removal of underground services.

One contact also reckoned that because Sydney authorities don’t know how to build light rail (tram lines), the whole project is (over) engineered to heavy rail standards. That might explain why on a previous visit light rail services were suspended due to a signal fault, and why the following day we encountered a tram/pedestrian crossing with signage that warned us to beware of trains. 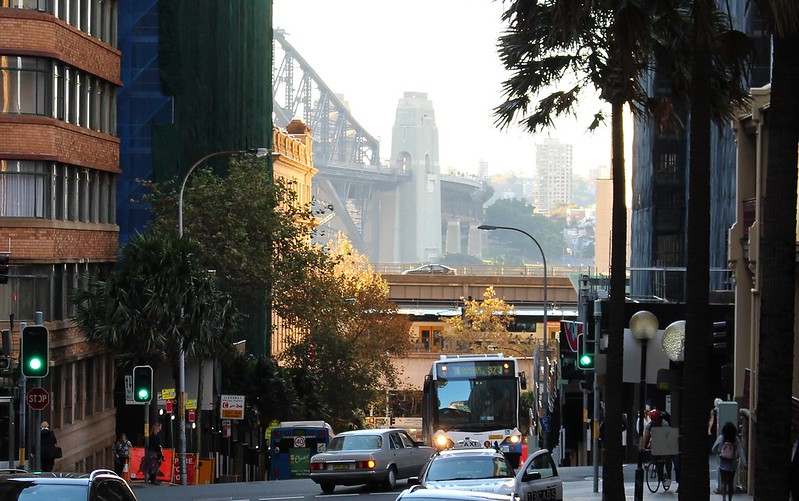 Despite it still being light, the sun was going down, and the gloriously warm weather from the middle of the day had gone, with the temperature dropping rapidly.

Taking a somewhat roundabout route, we ended up at the Opera House, where we’d booked a tour.

Being a few minutes early we sat and people-and-seagull watched. Along the water’s edge, restaurant wait staff served a row of al fresco diners, in turn watched by a row of seagulls. 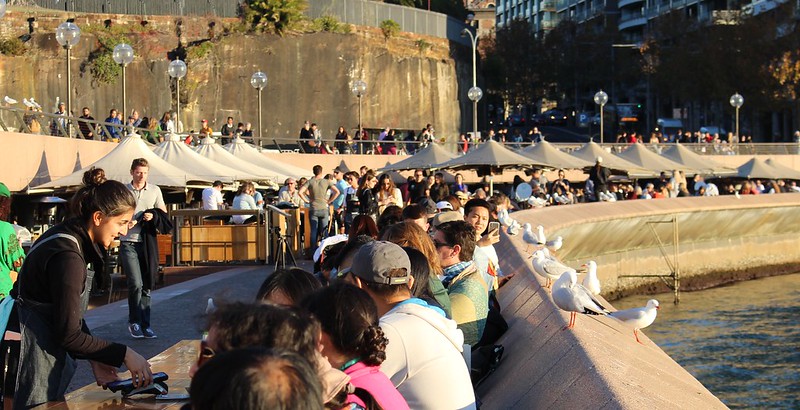 As soon as diners left, the seagulls would move in on any leftover food. 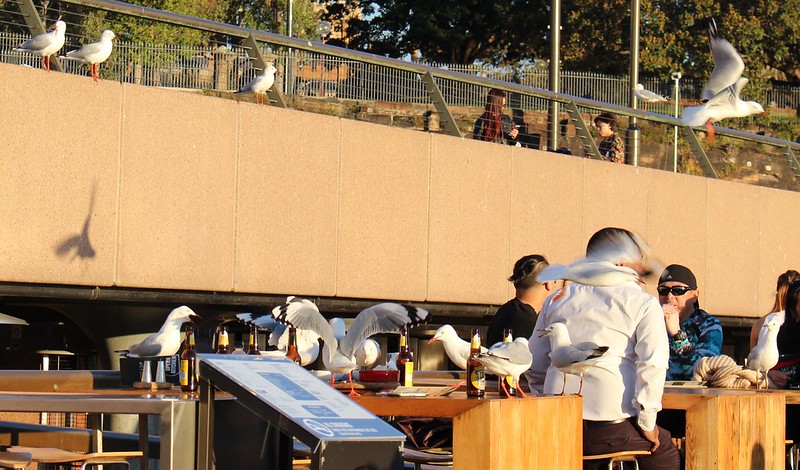 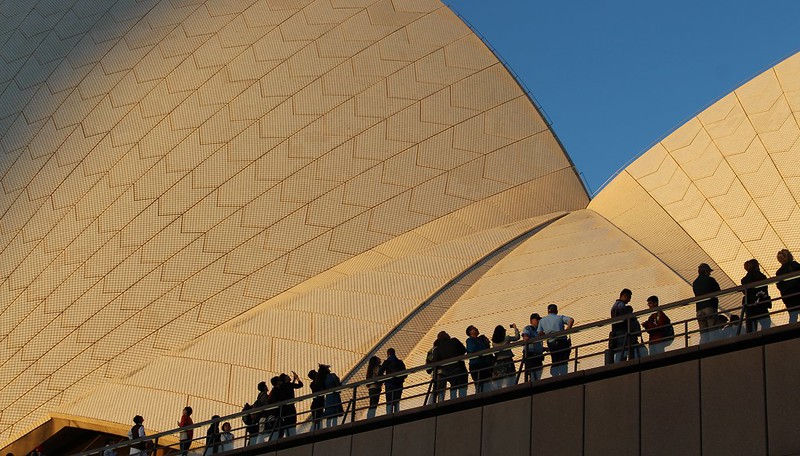 At the Opera House, they do a Backstage Tour taking 2.5 hours, which sounds like it might be good, but we decided a simple one hour tour of the building would suffice. It was very interesting, with our guide quite knowledgeable, and some fascinating titbits of information about the construction and history of the place.

The sun had gone down, and Circular Quay and the Bridge were looking lovely in the moonlight. 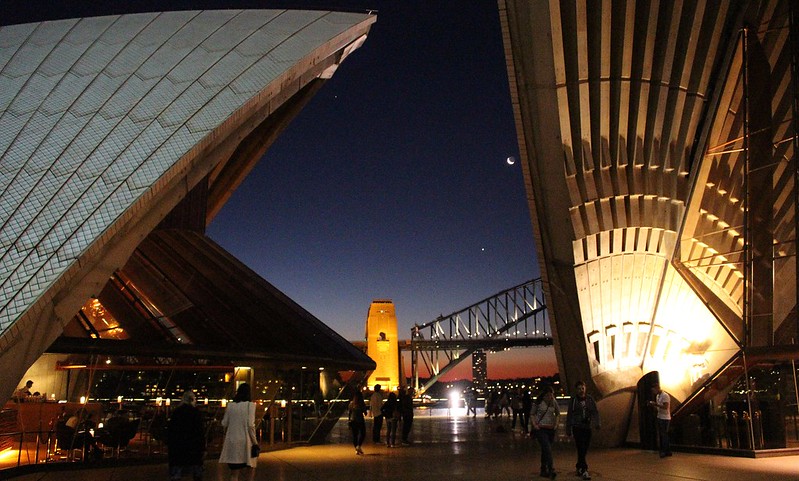 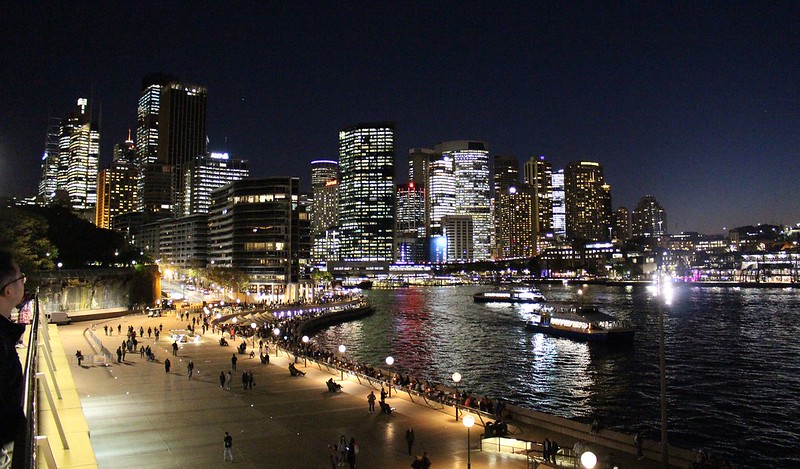 We kept walking, first back to the hotel, then across Hyde Park to the Bodhi vegan restaurant – another recommendation – for a very tasty dinner. Meals to share that include very delicious imitations of duck and chicken. Fakeducken, you might say?

Back to the hotel. Google Fit reckoned 20,300 steps for the day. Enough walking.

4 replies on “Sydney on shanks’ pony”

“Three course breakfast”
Geez, I can do better than that for a buffet breakfast. Make that 10 courses!

[…] mentioned yesterday the confusion of Sydney authorities as to whether light rail is tram or train. In Melbourne […]

You went with Virgin?

Did your flight go from terminals 3 or 4?

Recently, I went to Adelaide, and had to walk all the way to terminal 4. I almost missed the flight. It was such a long walk

@Jim, the flight out went from terminal 4.

I didn’t think it was very far via the (new?) connection from T3 to T4.