Sydney getaway continued. First stop: a bakery in the Queen Victoria Building, the spectacular 19th century shopping arcade, where we grabbed some croissants for breakfast.

Then to Town Hall Station to hop on a train to inner-city Redfern.

A short walk from Redfern Station is Carriageworks, a former… well, railway carriage workshop, where there’s a farmers market on Saturdays, and art in the adjacent workshop buildings, which have been converted into gallery spaces. 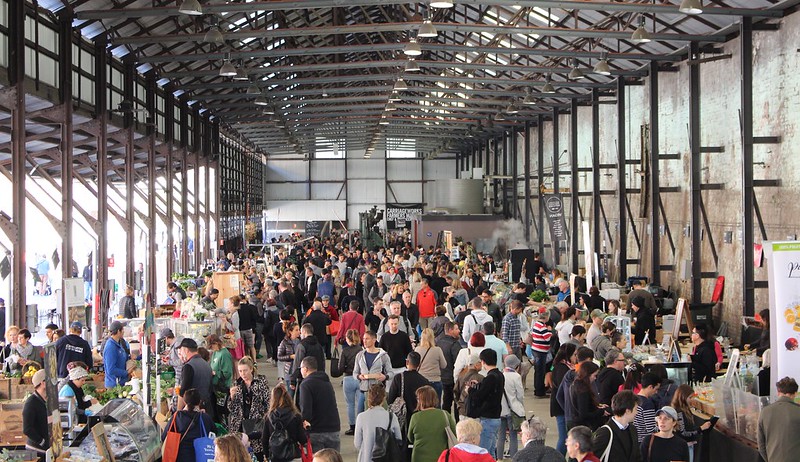 We browsed through the market — I bought a bottle of hot sauce to take home for my sons — then we took a look at the galleries: the Sydney Biennale was on.

The interactive work “Constellations“ involved a huge white wall and a baseball bat. You take the bat and hit the wall, then listen to the sounds reverberating through the space.

Unbeknownst to the audience, a concert-size public address system, including multiple subwoofers, microphones and related sound equipment, is hidden within the structure. The sound of the impact between bat and wall is amplified by a massive 120 decibels, reverberating throughout the gallery space and the building.

As you can see from the video, when I had a go, there was a bonus, unexpected sound: that of a scared toddler who had just come around the corner, overwhelmed by the noise. Poor kid.

Some of the other artworks were very cool as well, though nothing quite as interactive.

From there we had a walk around Redfern, to see if we could find any good street art.

Eventually we found a little, but not much. Ever tried Googling for “street art in Redfern”? No helpful results.

Some lovely terrace houses though. 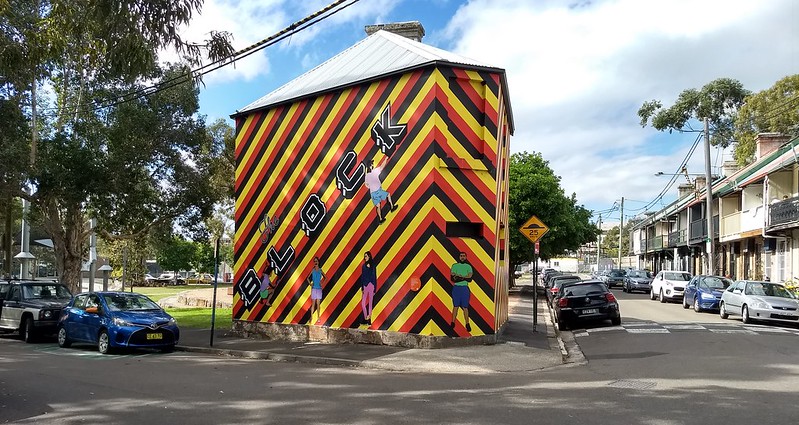 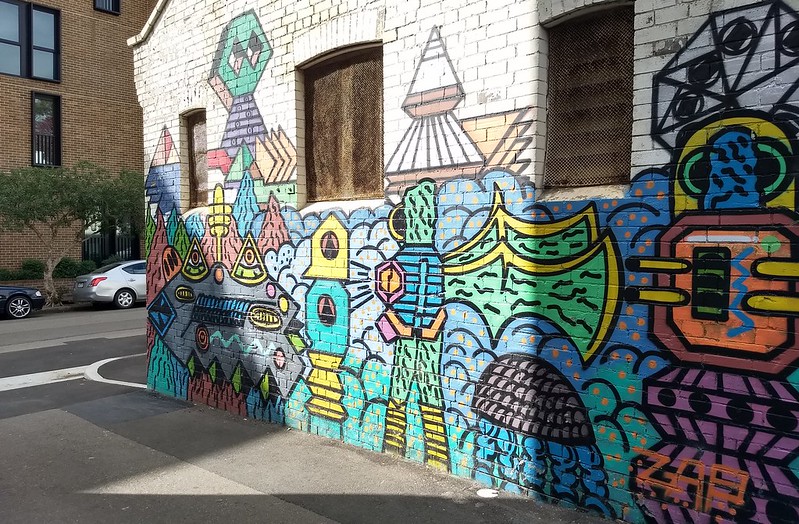 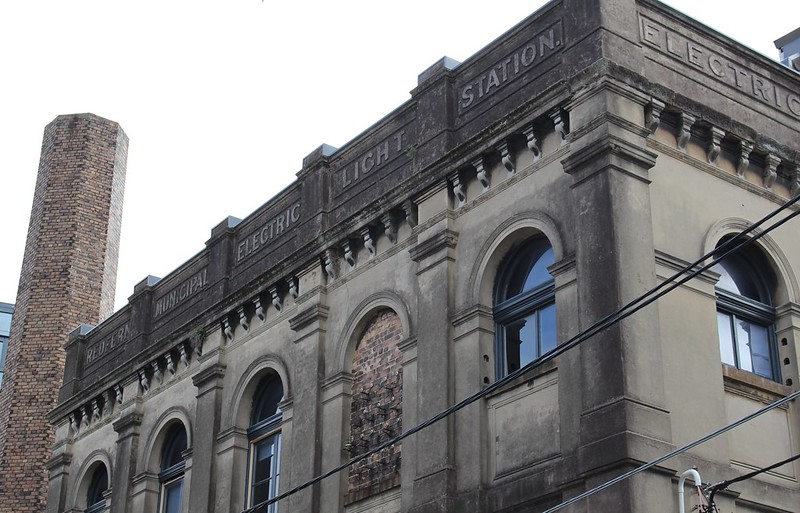 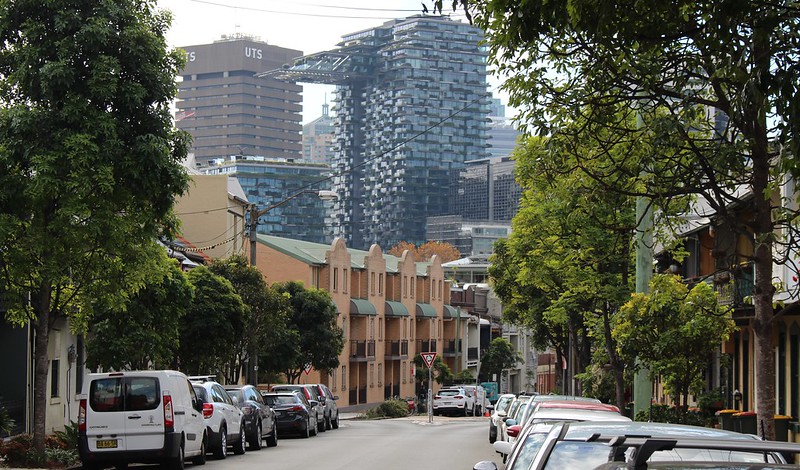 We ducked back to the hotel to grab the present I’d brought up for my cousin’s daughter (that makes her my cousin once removed) and headed out to Marrickville.

It’s a pleasant walk from the station to the park where we were meeting. It’s a very hilly area, and the council has created small parks in a few spots by closing off streets. Probably too hilly for playing football.

Marrickville, Sydney. Fancy a game of kick to kick? 🏉

Further down towards the park and the river, I noted these height markers — I assume every so often the whole area floods, which explains why some houses were elevated above street level. (Zero was street level, not footpath level. I’m not actually two metres tall.) 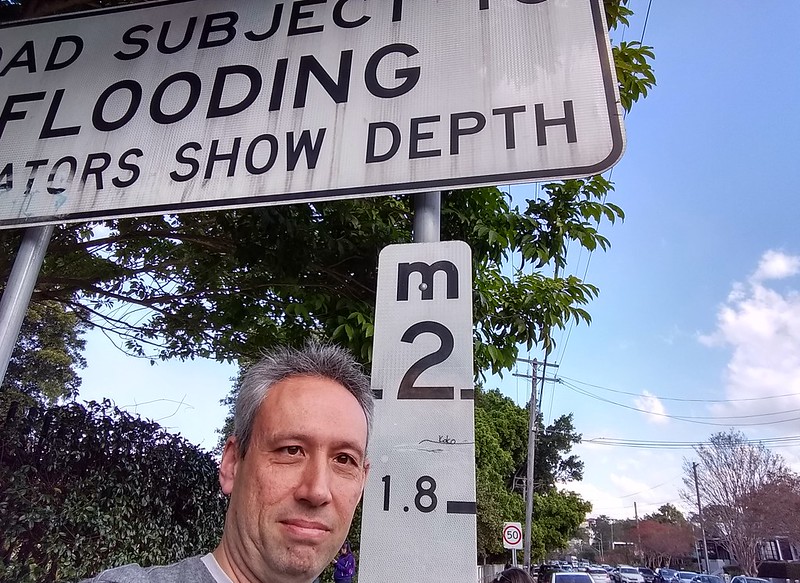 A lovely park BBQ with my relatives, then we headed by train and bus to my friend K’s place in the inner-west suburb of Forest Lodge for some nibbles, wine, a home made stew and some entertaining conversation.

K showed us through the nearby TramSheds — you guessed it, a former… tram shed, part of the old Rozelle tram depot. They’ve got a restored traditional Sydney R-class tram in there. (Restored in Bendigo, in fact, the same place Melbourne’s W-class trams are restored.) 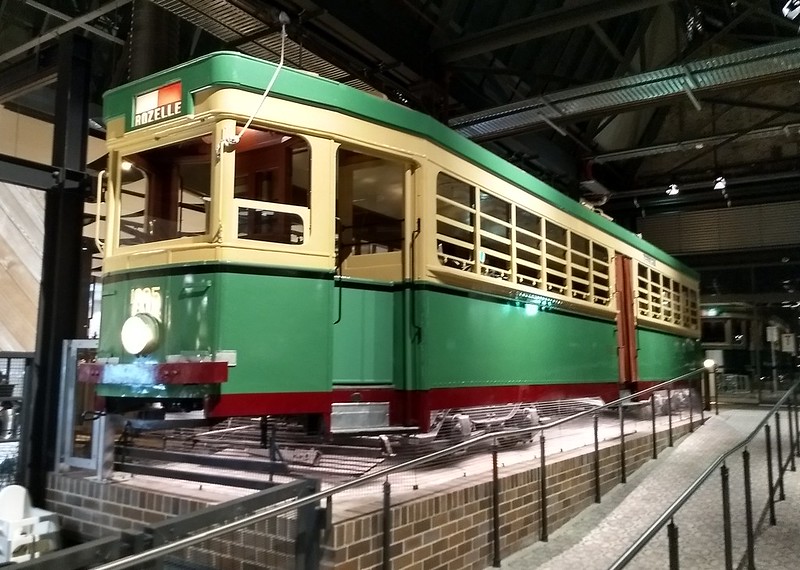 I mentioned yesterday the confusion of Sydney authorities as to whether light rail is tram or train. In Melbourne it’s definitely a tram. In Sydney it’s apparently a train, even though it’s branded “L” not “T”: 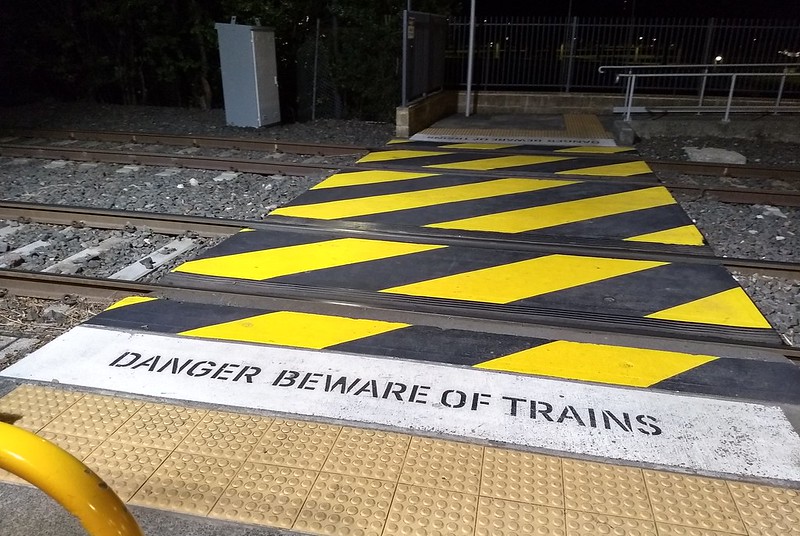 We caught the “L1” Light Rail back into the city.

The tram was quiet at the western end, but got packed when we reached the Casino. 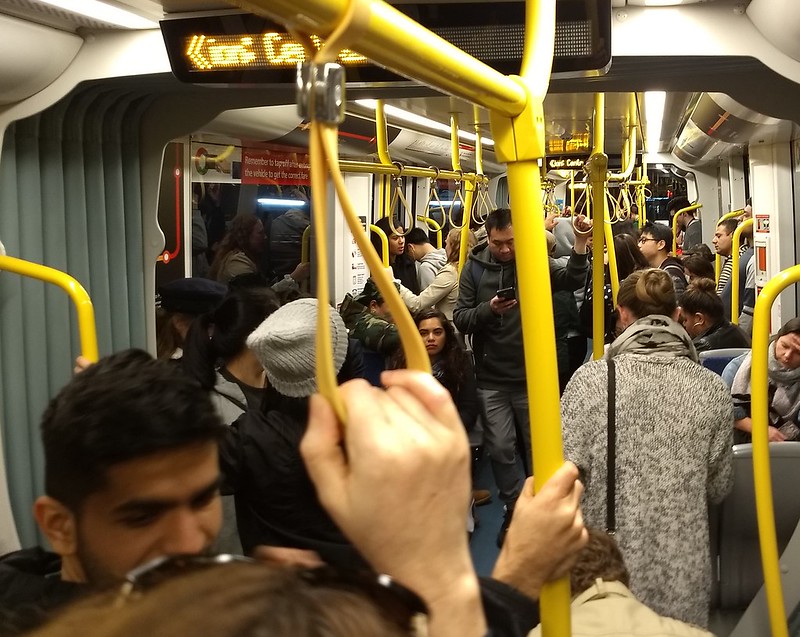 We hopped off at Capitol Square and walked back to the hotel. George Street was awash with young party animals, and relatively few civilians, making it somewhat noisy, and the quiet comfort of the hotel even more welcoming.

3 replies on “The noise of art”

The artwork at Sydney Biennale really does look cool – great photo of the huge colourful display (with the disinterested young person glued to their phone!)
Unless you live in the Dandenongs, Sydney is definitely more hilly than Melbourne. Also a lot more one way streets and windy roads (as in lots of bends) than the southern capital.

Well I noticed on the new South-East Light Rail they have signage that says look for light rail.