I was invited by the Level Crossing Removal Authority to look around the Bayswater station grade separation project. This is removing two crossings, either side of the station: Mountain Highway and Scoresby Road.

They’re in the final stages of the major works period, with a rail shut down of 37 days almost over, the line re-opening on Monday morning with the new station available for use (but not quite completed).

This is how it’ll look. The new station is more-or-less in the same place as the old station, but the new entrance is oriented towards Mountain Highway (where the shops are), with passengers no longer exiting into the middle of a car park. 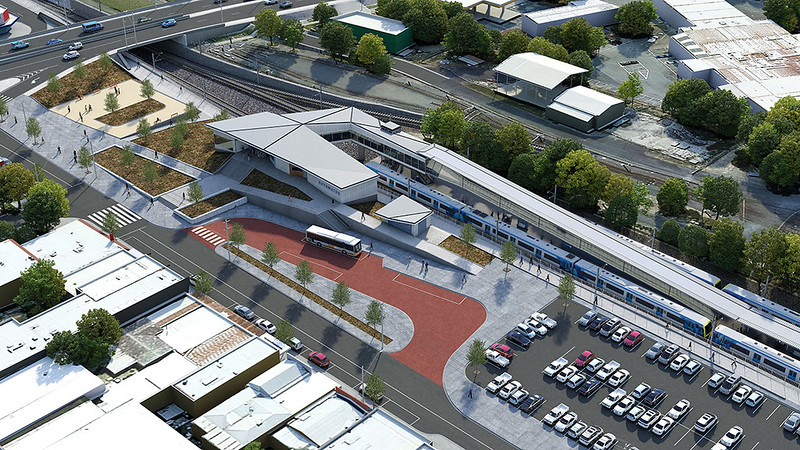 A complicating factor is the adjacent train depot. The rail lines will go under the roads, but there’s a limit to how far the rail lines can be moved down, so Mountain Highway has been elevated slightly. This photo looking southeast shows the line sloping down from the new station towards where it goes under Scoresby Road – this road bridge is already open. The train depot is on the left. 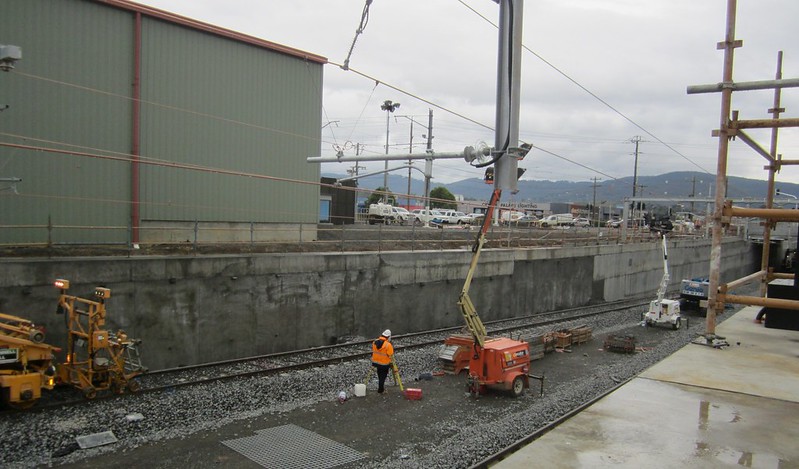 From the same spot looking northwest; the island platform is taking shape. 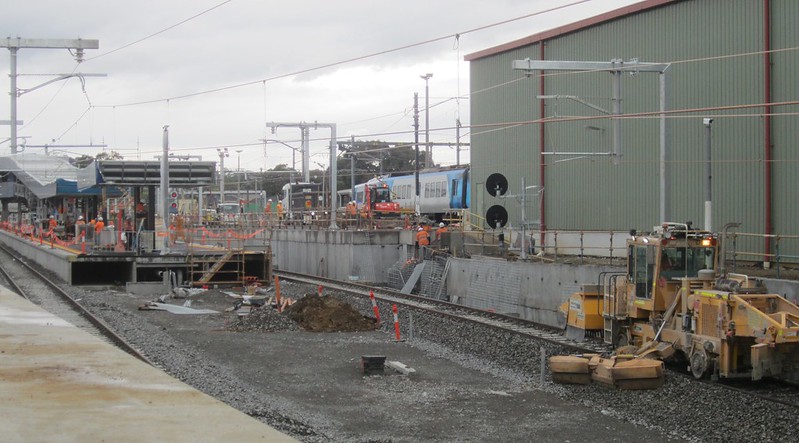 A ramp down from the concourse to the platform will be all undercover… and with the roof hopefully low enough that it actually provides shelter from rain that is not exactly vertical — unlike some earlier stations. Direct ramps like this also help distribute passengers along the platform, unlike twisty turny ramps such as at Springvale and Mitcham, which few people use. 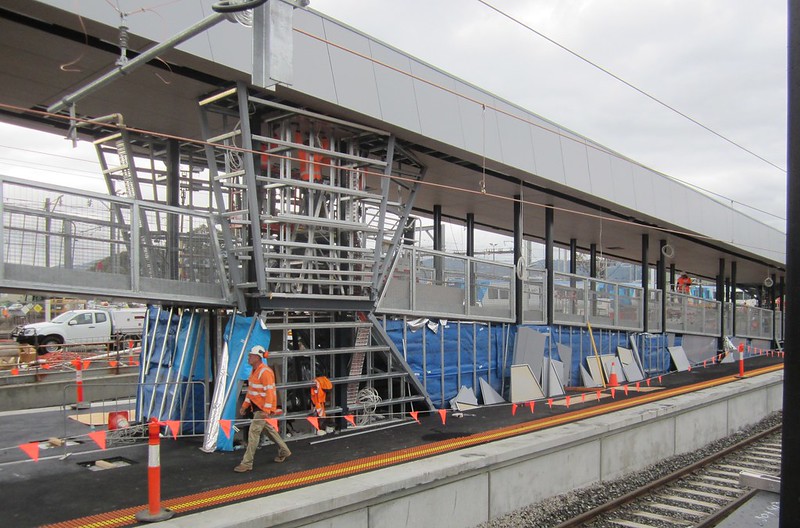 Looking towards the concourse. A bit hard to see, but there will also be stairs and a lift for those who don’t want to use the ramp. 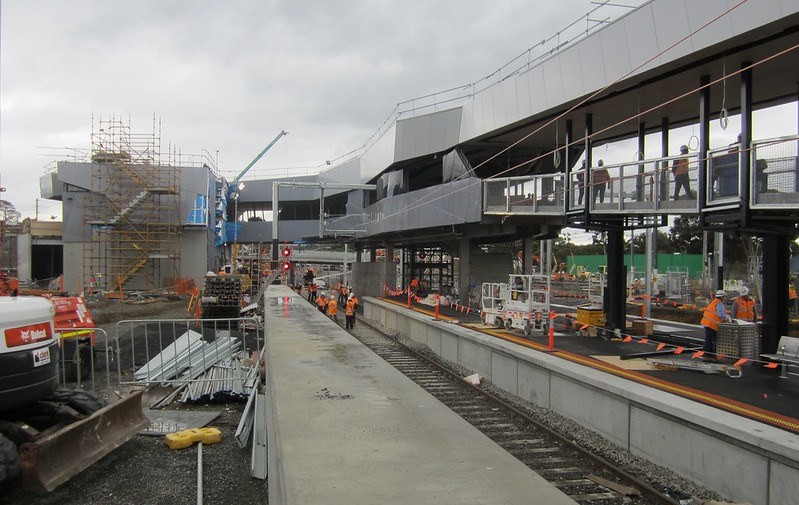 Inside the concourse, they’ve got a fair bit to do by Monday, but the Myki gates are in place. 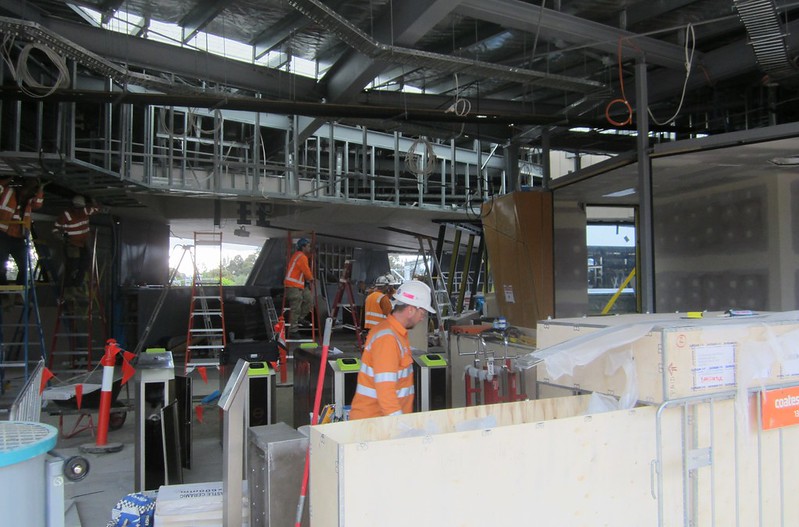 Exiting the concourse, there’ll be a ramp left to the bus interchange and car park, steps straight ahead to the shopping centre, and a path to the right to Mountain Highway. 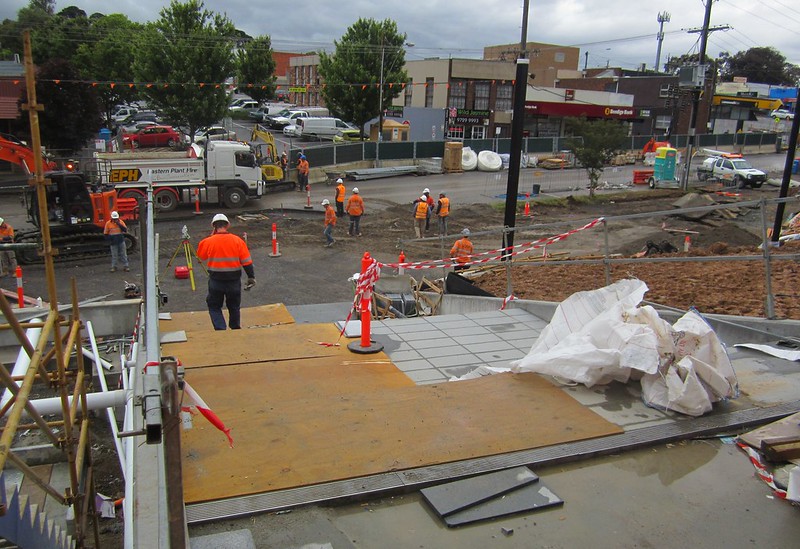 View from the street, on approach to the station concourse. 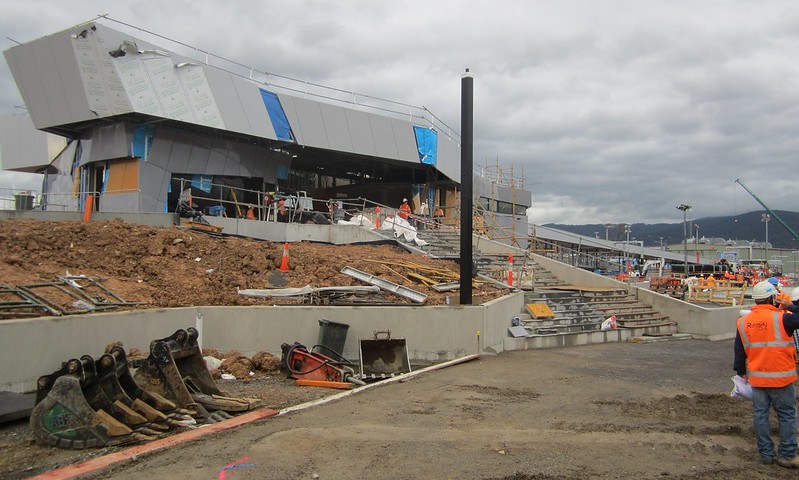 View from the Mountain Highway bridge looking north across the tracks. The bridge also includes a shared user path, so cyclists can pass under the road (and under the station concourse) alongside the rail line, though if they want to cross Scoresby Road, they will have to use the traffic lights. There will be a bike cage as well, directly next to the path. 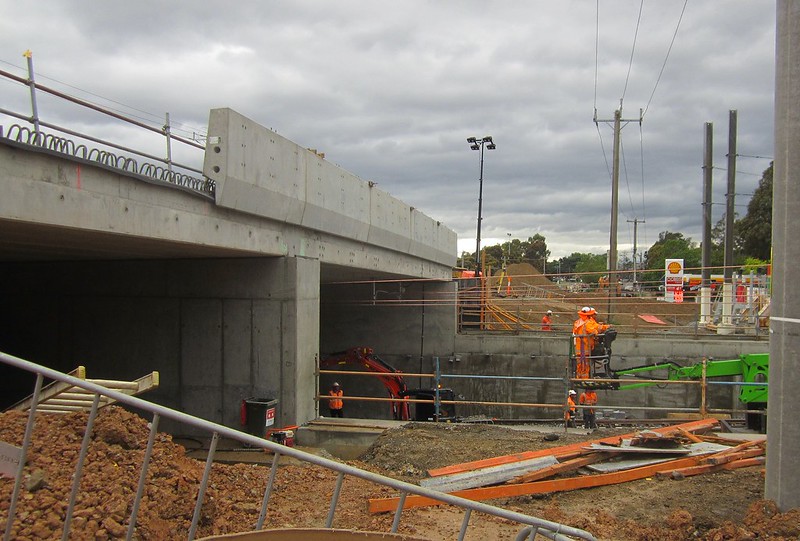 Mountain Highway itself is closed for now, though there were plenty of people in the cafes — and not just project workers in high-vis. As we know from Bentleigh though, other types of shops are likely to be suffering while the road is closed. 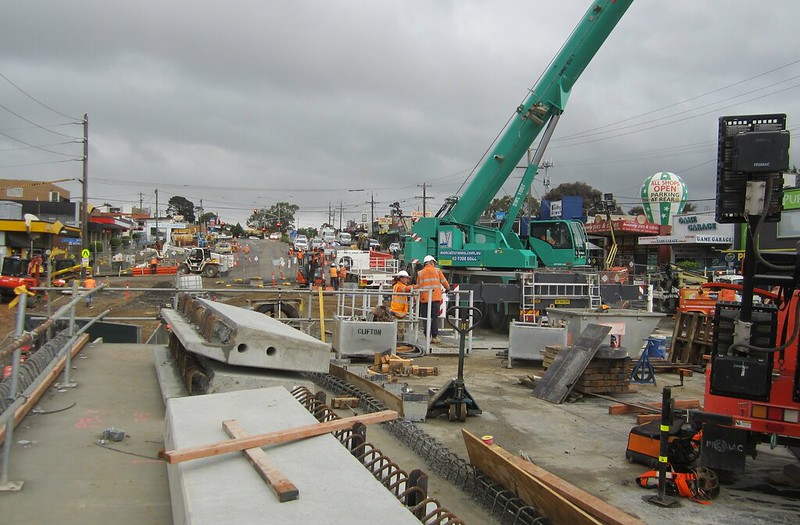 Here’s the view from the bridge back towards the station. Although the concourse is elevated over the tracks, from Mountain Highway the path will be built up to about road level, so it’ll be almost level going that way into the station. 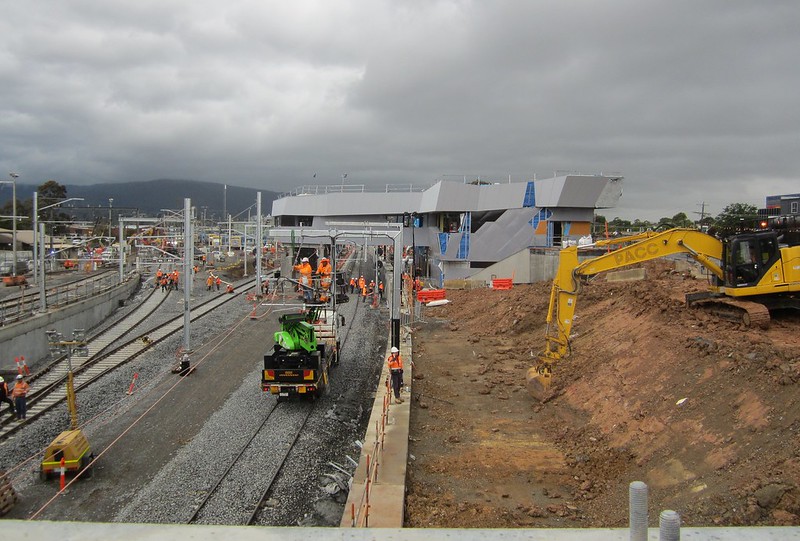 To the northwest of the station (towards the city) is a new shared use (cyclist/pedestrian) bridge, which is already open for use, so pedestrians can get across the rail line next to Mountain Highway, which is still closed. 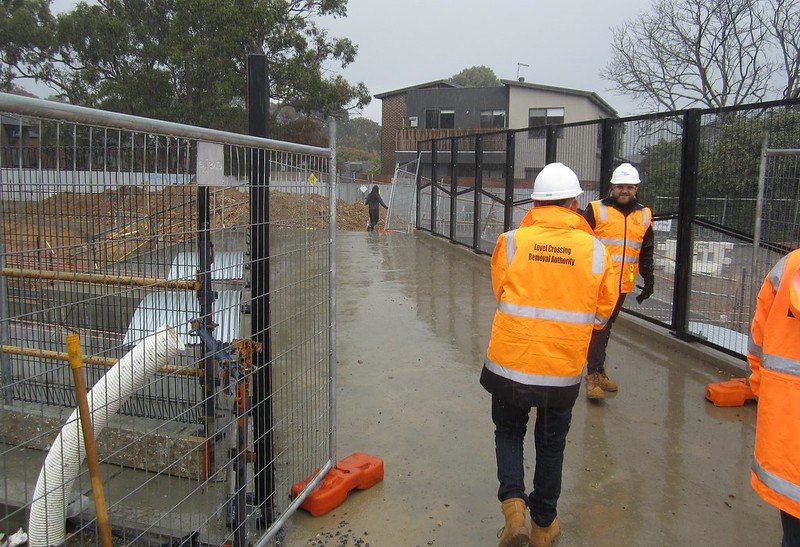 Looking towards the city from the shared use bridge, works on the electrical power is obviously proceeding ahead of Monday’s re-opening of the line. 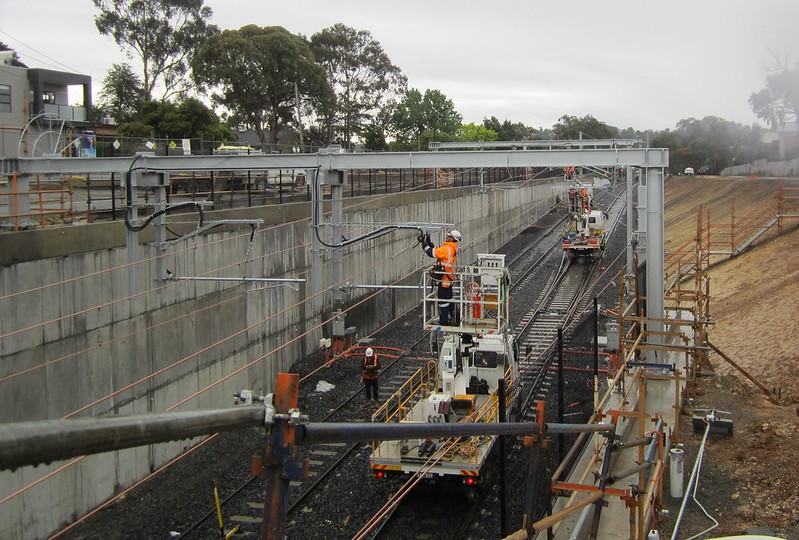 I’m told Knox Council is working closely with the level crossing project and Vicroads, taking advantage of the works to bring in further upgrades such as moving the power cables in the shopping centre underground, part of big picture urban renewal. This of course includes removing one lane each way of Mountain Highway, from three down to two — including on the bridge — matching the road configuration further east.

As I’ve noted before, I hope Vicroads have done the modelling on this, but after the crossing is removed you’re likely to see more consistent driving times, with fewer delays, especially long unpredictable ones — even with the lanes reduced. The space can be used more productively to make the shopping centre a place to spend time, not just drive through — consistent with likely re-development of the land immediately around the station.

I have to admit, I don’t get out this way very often, but I’m looking forward to coming back after the dust has settled, to see how Bayswater has progressed.

Thanks to the project team and the Level Crossing Removal Authority, for letting me have a look around — in the mud!

I think you mean Scoresby Road – not Stud Road.

Daniel, you need to replace the work “Stud” with “Scoresby”. I won’t tell HV

You still have a couple of references to Stud Road, the paragraph before your first photo and the title of that photo in Flickr.

@Stephen, thanks. Was difficult to find them all while on my phone.

I live in Bayswater, use the station daily so I was excited to return on Monday. I’m grateful they made re-installing the bike hoops a priority. It is coming along well and I’m far from unhappy with the design. The length of the platform access ramp surprised me at first. It just means one will have to more punctual to avoid an unsuccessful dash for their train. The stairs aren’t open yet either (as of Tuesday morning), which will of course provide even quicker access.

The pedestrian-friendly aspects you’ve highlighted are important. I get the impression that there has been more consultation on this than has gone into other projects.

[…] and wait for two pedestrian lights before being able to resume cycling down Station Street. Apparently there is a shared path bridge that is open to avoid the Mountain Highway, but I couldn’t find […]