Star Wars episode seven is officially out today on DVD and Blu-ray, but I managed to buy it yesterday — some shops with a name starting with Big and ending in W jumped the gun, as did some with the initials J and B, apparently, though the large W establishment is selling it for $23 (on Blu-ray), which seemed like a pretty good price.

It had been available on iTunes and other digital services for some days, but I wanted the higher picture and sound quality of Blu-Rey. (iTunes can give me HD via my old iPad Mini, but I’ve found it actually drops frames during playback. Not so good.)

It sounds mucho-impressive on the Yamaha surround sound setup that I got in 2014, which I’m very very happy with. This unit does an awesome job with movies and TV, which was always the priority for me — that’s basically why I didn’t go with Sonos at the time; the cost for 5.1 would be about three times what I paid (thus unaffordable for me) and it is limited; for instance it doesn’t support DTS.

Back to the music

The Yamaha unit can play my music collection via the network or just off a USB plugged into the front, and it sounds great. It also does online radio (via the vTuner service), which is very neat. I bought a separate Pure Flow One radio (digital/FM) for the kitchen, which also does online radio. Yay, BBC 6 Music!

The only thing my equipment doesn’t do is multi-room music, which systems like Sonos excel at. Yes, I can play BBC 6 in both rooms, but it’s not in sync, which would be handy in a smallish house where the living areas are all within earshot.

So yes, I still have Sonos envy. I regularly see it in action at M+J’s house, and recently I was over at another friend’s house and they have it too. Very nice.

What’s interesting is the emergence of the Google Chromecast Audio, a cousin to the original Google Chromecast (which is used for TVs). GCA, as I’ll call it for short, costs A$59 and brings Sonos-like features to old (active) speakers, and as of a December software update, this includes multi-room capabilities.

So GCA is a bit like a poor man’s Sonos Connect, which retails for A$549, providing much of the functionality at about a tenth the price… well, kind of, sort of.

But there are also other systems now available — more jumping on the Sonos bandwagon every few months it seems. So comparing them, we have (and I’m particularly interested in how much it costs to connect to older equipment): 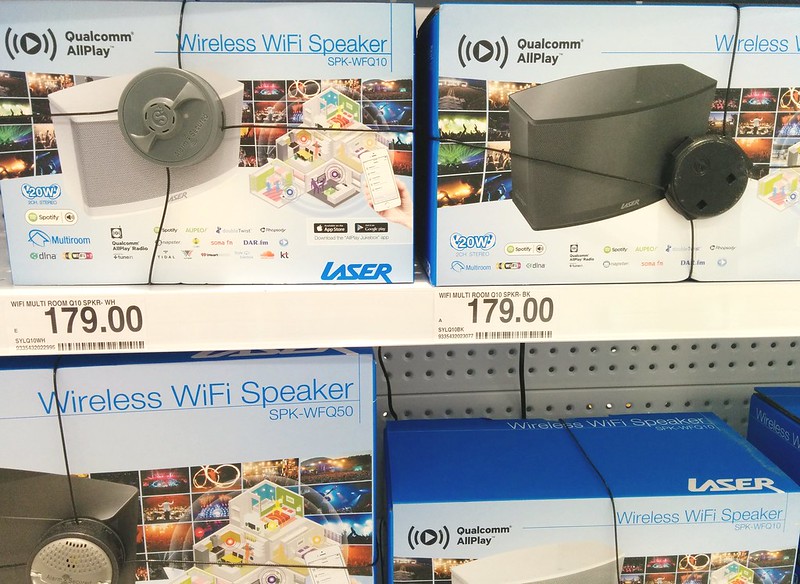 But here’s the interesting thing: some brands support Google Cast:

I’d hate to fall victim to vapourware, so I think I’ll believe this when I see it.

Let’s face it, the technically best solution still seems to be Sonos. They’ve been in the game a long time, their tech is mature, and they’ve got a proven record for selling equipment that lasts, and is upgradeable over many years. If I want multi-room music, I could get a Sonos Connect and then gradually get a bunch of Sonos speakers for around the rest of the house. Cost for Connect plus a speaker is from about $850…

Or I could get a GCA for the Yamaha, another for the Pure Radio in the kitchen, costing $120, and then speakers with Google Cast for other rooms, if the promised upgrade comes through. Cost from about $370.

I’d also need to figure out where to serve local music from. I should check if my router has is NAS capable – some can happily serve up files on a USB stick plugged into the back.

GCA does have a possible flaw: it has problems with gapless music played from some sources… it seems MP3 or AAC format is okay but WAV or FLAC isn’t. (What’s gapless music? Playing consecutive tracks with no gap between them, so that songs that lead into one another like on side B of Abbey Road don’t have short silences between them. Wait, did I just say side B? Showing my age…)

Multi-room music is perhaps the ultimate in extravagant unnecessary lifestyle products for my home. I think I’ll hold off and see if Sonos decide to get a bit more price-competitive and bring the Connect down in price in response to Google Cast and/or see if Google Cast gets a firmware upgrade to properly handle gapless music, and to handle multi-room music on third-party speakers.

Has anybody gone down this road before me? What did you find?

I would investigate carefully whether the Chromecast Audio is supported by your sources before buying. While it claims to support iOS, in fact that’s limited to very few applications and certainly not the standard music player.

It’s not exactly everywhere on Android either to be honest. We’re glad it was cheap because it’s a bit disappointing.

My local JB I checked out today, has the latest starwars for $19.xx or something like that.

I will never join those big downstreaming services such as Presto. It is like ditching public transport for no less than a yank tank. The amount of bandwidth used compared to a broadcast service is massive.

There is nothing like buying my own copy on DVD. I am still catching up, but still, it will be worth it once it is complete.

For the record, while I wanted to get the StarWars DVD, my credit card is playing up so….. perhaps tomorrow or next week.

@Hamish, thanks – noted. I expect it will mature as time goes on.