A couple of years ago I bought a Yamaha surround sound setup, which has been fabulous. I’d single out the sound track on Mad Max Fury Road in particular; very immersive.

Heck, even later seasons of the West Wing had some subtle surround going on, adding to the viewing experience.

I’ve used it for music too, and it sounds great. I copied all my iTunes music onto a USB stick* which can plug into the front of the receiver. You can play tracks or albums by navigating through on the TV, or via a phone or iPad app. But it’s a bit clunky; it’s not really designed well for that, and it can’t fathom tracks within genres, nor play lists, and it certainly can’t do anything as fancy as random/shuffle play. (Hey Yamaha, how about an upgrade?)

You can play music from iTunes to it via Apple AirPlay, but that requires using a computer.

*By the way, I have iTunes configured to rip CDs as MP3s at the highest bitrate. I figure those files are more widely playable than any other format. 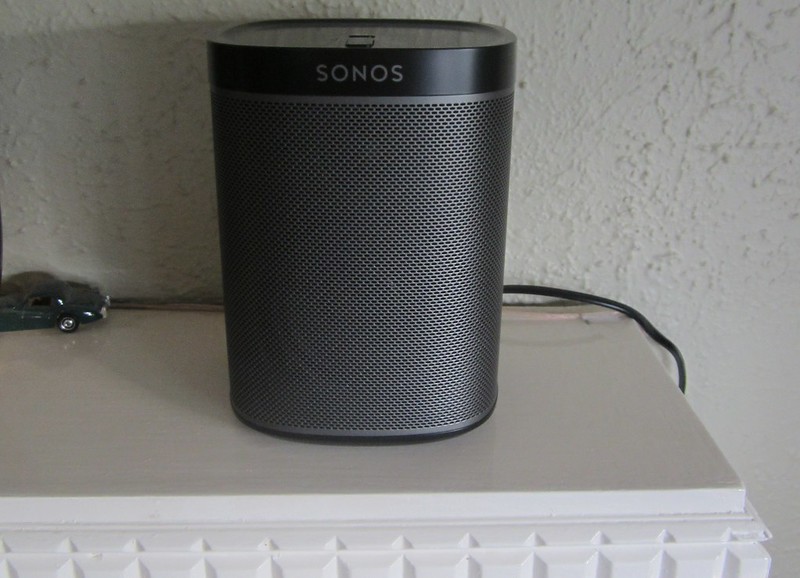 But I was still craving J+M’s Sonos system, particularly the idea of music playing in perfect sync around the house, preferably without wires everywhere.

I considered other cheaper options. Could I achieve the same with a few Google Chromecast Audio dongles? Perhaps, but it’d be messy. And other manufacturers have Sonos-like speakers (though the good ones aren’t really much cheaper).

Then a few weeks ago JB Hifi offered $50 off Sonos speakers, so I thought what the hell, I’ll go for it. I thought maybe I could splurge for a Play:1 (the smallest speaker, $299 less the $50 discount) and get a Connect (a little exhorbitant at $549) to sync music through to the Yamaha receiver and speakers.

Nagging doubt on the Sonos Connect: Sonos speakers have a fixed delay of 70ms (to allow them all time to sync), which is fine. And the Yamaha can be adjusted to delay, if it’s ahead. But if the Sonos is ahead, you’re stuffed. You can try switching the Yamaha to Direct Mode, but if it’s still behind, you’re still stuffed. No music sync. (I also vastly prefer the Sonos gear in black. The Connect is only available in white.)

Anyway, I got the Play:1 and tried it out. Very impressive. It thoroughly exceeded expectations. Great sound.

When the kids heard it, they thought the music was playing out of the Yamaha’s big speakers, not the tissue-box-sized Sonos speaker on the mantlepiece.

Which made me think: if the goal is multi-room music, why even bother getting the expensive Connect for a (possibly troubleprone) link to the Yamaha? Why not just buy another Play:1 for half the cost?

Ingenious. And of course the Play:1 can be moved around if ever required.

Meanwhile I’d been looking around at what secondhand dealer Cash Converters had in the way of Sonos gear. The Parkdale store had a Sonos Bridge, used to configure Sonos systems to use their own network instead of the WiFi. It’s the old model (the new one is called Boost, costing $149), but was only $29. Sold.

So now I can play synched music in the livingroom and kitchen, which in my small house, covers most of the common area of the house. And the speakers are small enough that I can move them around if needed.

Some people online reckon that there’s not much difference sound-quality-wise between the Play:1 and the larger Play:3. And I think I like the style of the 1 more than the 3 or 5.

For online radio, it’s not perfect, because it’s relying on good internet. Like the Pure radio I already had in the kitchen, it seems to be occasionally prone to dropouts if the home internet (Optus cable) is clogging up. (The Pure radio also does actual radio, including DAB+ digital radio, so I can flick it to Double J if BBC Radio 6 Music is playing up.)

I still think the Yamaha was a good choice for surround-sound movies. Sonos’s option (Playbar plus Sub plus speakers) is around three times the price, and it can’t do DTS sound. It’s also dependent on the TV being about to output a 5.1 signal, which some can’t.

My next step was going to be to put my home music collection on a shared drive that the Sonos can play, such as a Raspberry Pi set up as a NAS — but I checked and my cable modem/router has that feature. It’ll share anything plugged into the USB port. So I plugged the USB stick I’d been using in the Yamaha into the router instead, then told the Sonos where to find it… job done!

Of course, Sonos is one of those things like DSLR camera lenses… addictive… I’d be surprised if I don’t end up buying more gear at some stage. Hmm, one for my bedroom perhaps?

One reply on “TreatYoSelf: Sonosed”

[…] loving the Sonos system. I’d been warned that buying extra speakers for it was addictive, and it’s true. I just […]