Let’s see if I can go a whole week without writing a blog post about level crossings.

Video shops are dead. For a while there was one (or more) in every suburb. Where I live now in Bentleigh there were at least two. Even Glenhuntly, where I lived in the late-90s, had two.

They were close enough that mostly, I could walk to them. M’s house in Footscray was the exception — the video shops around there dealt with the local migrant populations, and you had to go further afield to find English language movies (or even movies with English subtitles).

Over time the video shops ditched VHS and morphed into DVD shops. But in the last few years, almost all of them have closed, disappeared along with CRT non-widescreen analogue TVs. As with many industries, the internet is taking over. 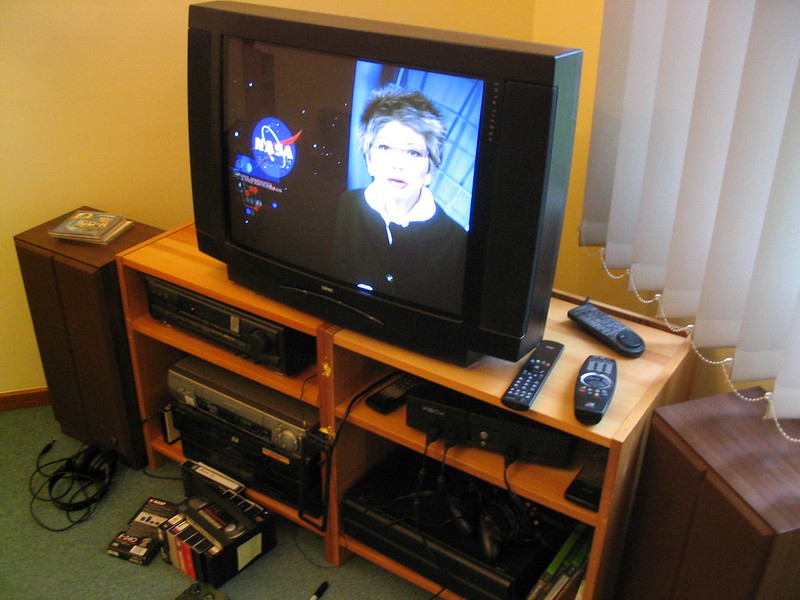 Blockbuster was one of the biggest video shop chains — they now seem to have only four stores left in Melbourne. I’m not sure about Video Ezy — if the White Pages is accurate, they still have about a dozen stores. Any number of individual stores have vanished.

(From my observations, a surprising number of old video shops seem to have turned into fitness centres. Some kind of transformation from couch potato to gym junkie.)

For a while, DVDs by snail mail was the thing. It never caught on at my house. It’s just not the way we watch movies. Usually the decision to rent something is spontaneous. You need to go to a physical shop, or stream it. The other option I’ve tried is renting on iTunes. Unfortunately this isn’t streaming – downloading a movie in HD first can take ages – far longer than it would take to find one of the few remaining video shops.

Streaming video is good, the technology and infrastructure around it has matured, but none of the services are perfect — I’ve now sampled most them.

Then I moved onto Netflix ($11.99 for HD). Good range, terrific apps (virtually every platform you can think of) and hooray for HD.

Then I tried Stan ($10, including HD). Good range, slightly clunky iPod app which looks like it should be able to use a cable to your TV, but can’t.

The problem with all of these is that the range is good but not brilliant. There were just far too many times I would think of a random movie, go looking for it, and discover it wasn’t available. Ditto with TV.

In a great discussion on the Talking Headways podcast from late 2014 (I’m working my way through the earlier episodes) they talk a bit about Netflix and other streaming services vs the old video shops, and come to the same conclusion: the range isn’t great. It’s probably more restricted than at many of the old video shops.

And even today, the biggest range of TV and movies is at your local JB Hifi store… as long as you’re prepared to buy, not rent.

At the moment I am without a streaming service — we’ve got a few of those old-fashioned DVDs to watch. But I have slowed down DVD/Blu-ray purchases. Barring Star Wars: Force Awakens (out on Wednesday), I’m not planning to splurge on any more discs for now, so I may get back to streaming again soon.

Which one? Depends what I want to watch. I have found these web sites which let you search their databases to see what’s available, without being a member:

These are useful tools, but I’m amused that Finder’s intro text talks about Game Of Thrones, which isn’t available on any of the services they compare.

It seems the streaming rights to that are locked up by HBO for their streaming service… which is only available in the USA. Sigh. Given the range of programming they’ve got, I reckon if they were to launch in Australia, they’d get a lot of happy subscribers.

That’s perhaps the biggest problem with the current streaming services — the content owners have much greater control over what each service can offer, so unlike those old video shops, whole ranges of movies from particular studios are just completely missing. “The long tail” was meant to solve this, but other factors have come into play.

And this is why channel BitTorrent is as popular as it is.

Also vanished are local suburban hardware shops.
I used to prefer going to the hardware shop in the local shopping strip, rather than going 4kms to a crowded Bunnings.
Used to have 4 hardware shops within 2kms of home. None left!

Chromecast a very useful addition – wirelessly stream from phone to any TV with HDMI connection. Cheap as, and doesn’t die with your TV (or if technology moves on, no need to replace the TV, just the Chromecast dongle). Supported by most of the streaming apps, regrettably not SBS or ABC iView last I checked (which was a while ago).

A cheap VPN can also expand your viewing range, noting it doesn’t work with Chromecast (except perhaps if enabled via router, not mobile) as I think the Chromecast makes a direct connection to the media server once you establish the stream (giving away your true location). But for ipad, mobile or other viewing, all good.

And the aggregator websites can be helpful, that advise which streaming services have which shows (or which countries do on the same service – Netflix US, Netflix Cananda etc).

How is the high definition picture quality with streaming? I can’t see how it could be as good as that offered by a 25 GB Bluray, which is what I use on our large, high definition screen at home. I can certainly see the effect of data compression when I view HD TV broadcasts, and some torrent material is pretty poor in that regard as well. Streaming services would need to be working some kind of magic to provide a picture as good as what we get from Bluray, wouldn’t they?

But I like your posts about level crossings, Daniel!

@Fred, I was thinking the other week that the Two Ronnies (and other similar) shop sketches wouldn’t really work as well nowadays. In many cases, people don’t really interact with shopkeepers over the traditional shop counter anymore.

@Philip, my TV is high-def, but not particularly large (32 inches/80 cm). So HD TV looks pretty good to me, as does streaming video. But yes, I think we all know Bluray is likely to be much higher quality. Eventually I’ll upgrade to a larger TV, then I’ll really see the benefit of it.

Always sad to see shops close down. It’s good that there are lots of competing providers for movies/TV shows – it keeps keeps the cost down.
Another example is photo shops in shopping centres that take portrait photos of parents with cute kids. Now parents take selfies with their children and post immediately so who needs professional shots?

The $2 rental places seem to be the last ones standing. I did try to keep a a friend’s store open but eventually it had to close.

Between the $5 Umbrella Entertainment sales and buying lots of DVDs due to listening to movie podcasts I have more than enough DVDs to watch at the moment.

The long tail is my concern. Where will I be able to obtain the old movies that currently I can rent from the local video shop?

The streaming services won’t provide them, in fact Netflix recently purged hundreds of old movies from their US catalog (they were never avaabile to Australia).

Will they just disappear, protected by ever lengthening copyright periods, like much of the old music.

There’s still a video shop in Kyneton. I’m surprised it’s managed to survive for so long, especially with the NBN coverage here.

I wandered into a local Cash Converters last year and was shocked at the vast array of DVDs on the shelf. It is probably not exaggerating to say the DVD section was about 5 m long x 3 shelves high x two stacks deep. I walked out with 2 seasons of a TV show I wanted and a movie for about $15. Not really a fan of their business practices, but I figure people are dumping their largely worthless DVD collections for whatever they can get. I went back and got the 3rd and 4th seasons of the same show a few months later.

For discrete movies you can’t get on Netflix, I’ve found streaming from the PlayStation store to be cheap and with an excellent range, probably better than your local JB. You can rent most movies for $4-5, and it plays as you download. TV shows are usually $20-25/season.