It used to be that the fashionable bridge for high vehicles to crash into was the Spencer/Flinders Street rail overpass — eleven hits in five years.

But it’s been usurped by the Montague Street tram bridge.

At lunchtime on Tuesday I went down to have a look.

Certainly no shortage of warnings signs. In this view alone I count four, plus the stripy guard barrier in front of the bridge: 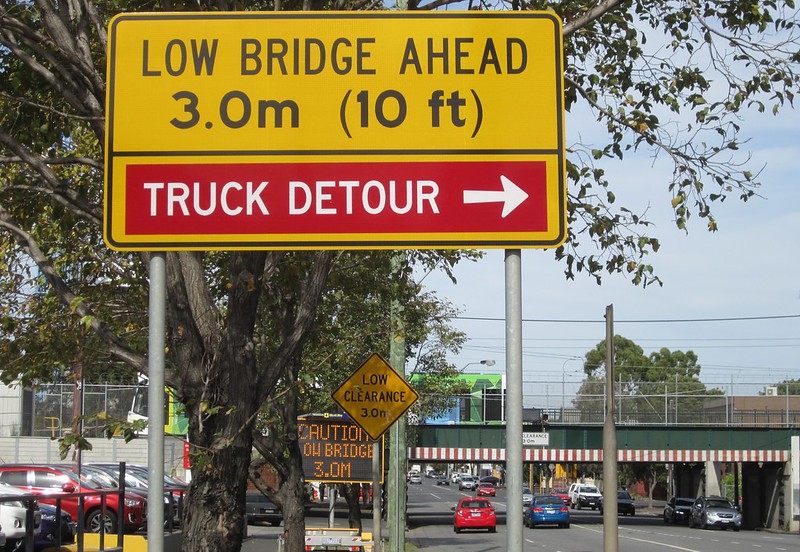 What you may not realise is that it’s actually two parallel bridges. One takes tram route 109; the other has spare tracks used for tram storage, as part of the nearby Southbank depot. (Originally one was the Port Melbourne line; I’m guessing the other was freight tracks or sidings.) 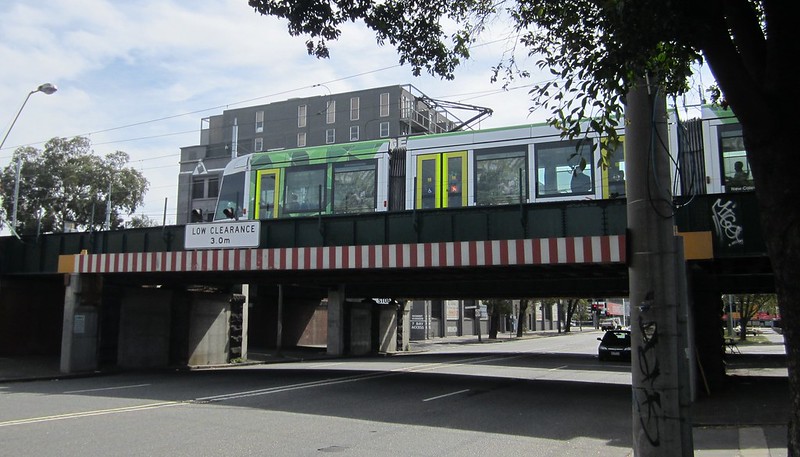 Similar to train bridges, there are signs indicating you should ring Yarra Trams straight away if a vehicle hits the bridge. Presumably that phone number has been rung a few times recently. 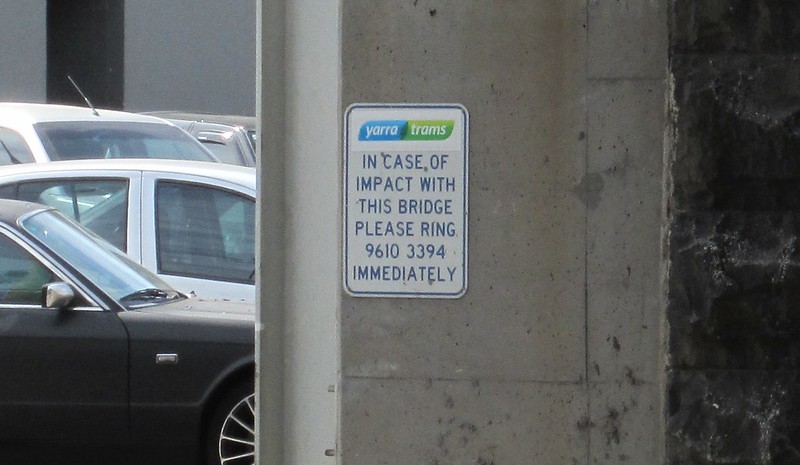 I was only there for about ten minutes, but unbelievably, another vehicle hit the bridge while I was there. This truck’s exhaust pipe hit the barrier. The pipe bent markedly, but stayed on. The truck driver stopped momentarily, then just kept going. 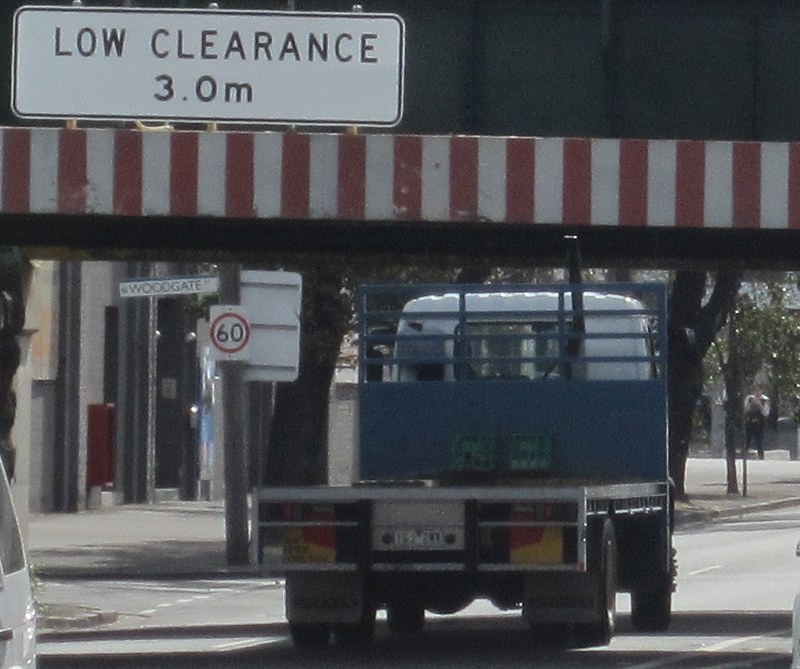 Not a serious collision of course, but amazing that despite all the signage and all the publicity, it still happens so often — this was the day after it had been hit twice.

And thankfully the vehicles are really hitting the super-tough guard barrier, so damage to the bridge itself (which would cause untold delays for many tram services and passengers) has so far been avoided.

I guess it’s a moment of distraction – the brain doesn’t register that “3.0 m” means “crash!”

Three bridges, in between is the newer section that carries the bike path and (from what I see in street view) a number of conduits. I also find it interesting how there are original bluestone piers that have been reinforced by concrete.

Victorian Railways customs offices were adjacent to the station, to handle all goods traffic from Port Melbourne.

@Stephen and @David, thanks!

As the link David posted makes clear, the gap between the railway bridges is because one of the Montague Station platforms sat between those tracks.

The web site of the late Weston Langford has some photos of Montague Station: http://www.westonlangford.com/search/?q=Montague

Also worth a look is the PTC Collection at PTOV: http://prov.vic.gov.au/search_results?searchid=41&format=freetext&Description=Montague&ItemNo=&SearchRecords=25&x=55&y=14

It was probably a couple of years ago now but I remember feeling sorry for the elderly couple who drover their brand new campervan off the Spirit of Tasmania and straight under the Montague Street Bridge. Well almost under. They didn’t really make it.

Thanks for sharing your valuable research. Without truth seekers like you, we might succumb to the lies the mass stream media sprouts about Monty. We might be blind to the fact that exactly the same people who planted explosives in the World Trade Centre have designed Monty to be the perfect I-can-go-wherever-I-want type of driver trap.

Once people discover the truth about the Montague Street Bridge, things will change.

There’s a tendency to judge the drivers who crash into the bridge – and of course they are primarily responsible – but surely Vicroads and Yarra Trams/Victrack need to look at fixing this permanently.

It’s not good enough just to put up signs when the evidence shows that a significant number of drivers are caught out. Does a bus load of passengers need to be decapitated before they deal with this properly?

If we’re looking for a long-term solution to the problem, I think the only practical option would be to drop Montague St between Normanby Rd and Woodstone St (60m), and between Gladstone Ln and Buckhurst St (95m). Put in a 1:10 slope and you get twice the current clearance, subtract 1m for the Woodstone St and Gladstone Ln bridge decks. This is assuming that the bridges can’t be made higher, whether for yard, mainline or heritage requirements.

No idea about cost, it really depends on what sorts of services are underground in that area. Probably something like $50-75mil.

Our truck, bus and caravan drivers today are too lazy and stubborn to remember their vehicle’s top height. Putting visibly clear signs up in the bridge’s vicinity won’t help a bit unless they have decent numerical reasoning. I guess lowering the road by a metre or 2 would be the best solution so the bridge won’t be affected at all and disruption to both road and light rail would be minimised.
I’m surprised on the number of hits the Montague St Bridge has, way more than Dresden Dolls, and yet it still stands. This bridge deserves a medal of strength and endurance, a nickname and a catchy motto too.

Maybe due to more people following GPS directions instead of knowing where they are actually going?

Brisbane has a lot of low bridges on the freeway and has height testing devices at every bridge.

Friends of mine used to live in one of the apartments on top of the Self-storage place overlooking the Montague street bridge, with a magnificent view of it. There’s a Thrifty rent-a-truck place about a block away too, so nearly every weekend they’d get to watch someone drive a rented truck into the bridge. Must have been a nice little earner for Thrifty