Sunday! And so we get to the main reason for the trip to Sydney on this specific weekend: the Doctor Who Festival.

I’ve been to Comic-Con in Melbourne twice, but this was a different beast: 98% dedicated to Doctor Who, with little bit of Sherlock (which has many of the same producers/writers/crew members/fans!) getting a look-in too. But its official status meant this event got big guns in the guest department: star Peter Capaldi, former Doctor Sylvester McCoy, semi-regular cast member Ingrid Oliver (as Osgood), showrunner Steven Moffat, writer Mark Gattis, special effects supervisor Danny Hargreaves. These things don’t get to Australia very often — that’s why I was willing to build an interstate trip around it. 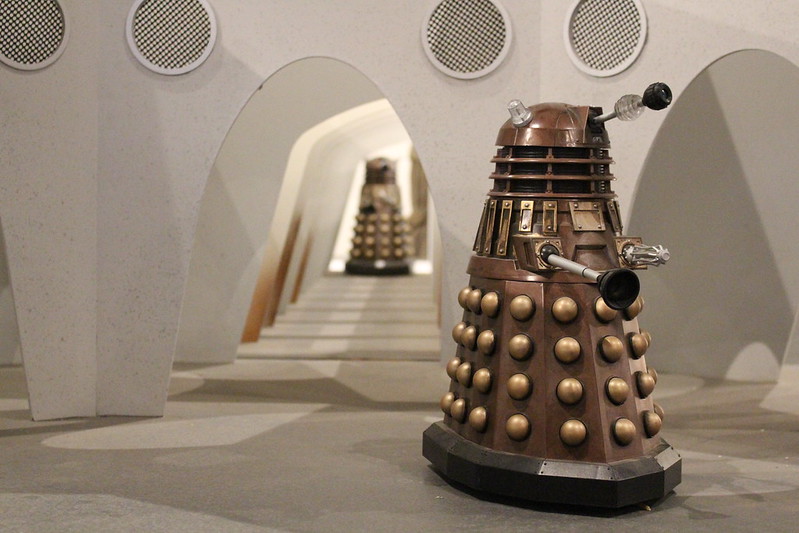 But first: Doctor Who is currently airing on Saturday nights in the UK, and in Australia the ABC puts it on iView as soon as the UK broadcast is finished: in this case, 8am Sunday.

So we got up at about 7:30am, showered and dressed and went downstairs to enjoy the slightly bland but plentiful breakfast buffet, then with our unlimited hotel WiFi organised ($9.95 per 24 hours), we fired up iView on the iPad, plugged it into the TV and watched the episode. Which I won’t talk about in case anybody hasn’t seen it.

The bus took us to Moore Park and the Hordern Pavillion, where after a lengthy walk trying to find a way in (like the restaurant the night before, sadly clearly designed to prioritise arrivals by car), and a mild panic trying to find the right ticket barcodes (thank goodness everything was available in my email, and thank goodness for mobile internet), we entered the Festival.

Inside the Doctor Who Festival 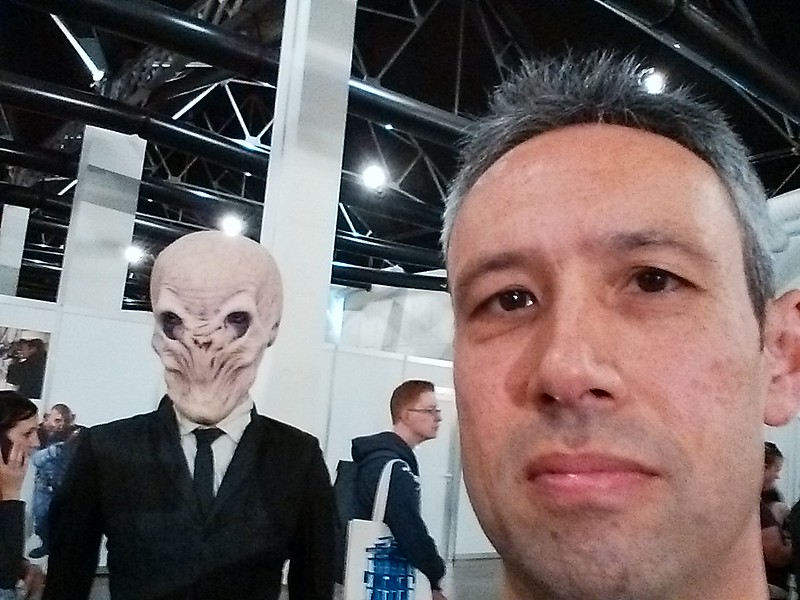 The main hall was a mix of displays and small theatre areas: a very impressive fullsize Lego TARDIS, sessions on writing, production, Cosplay, a big display of costumes and props, some merchandising, a special effects display, “pub” quiz, and areas for autograph signing and photos with cast members.

People were snapping away at anything that moved, and many things that didn’t. Two uber-fans behind us in the queue for the costumes and props seemed amazed that few people were taking photos of Matt Smith’s actual coat.

A Festival crew member showed us the stick from the recent Dalek episode — actually made of rubber, making it safe despite the pointy end, and had the advantage of not being caught up in quarantine as an actual stick would. 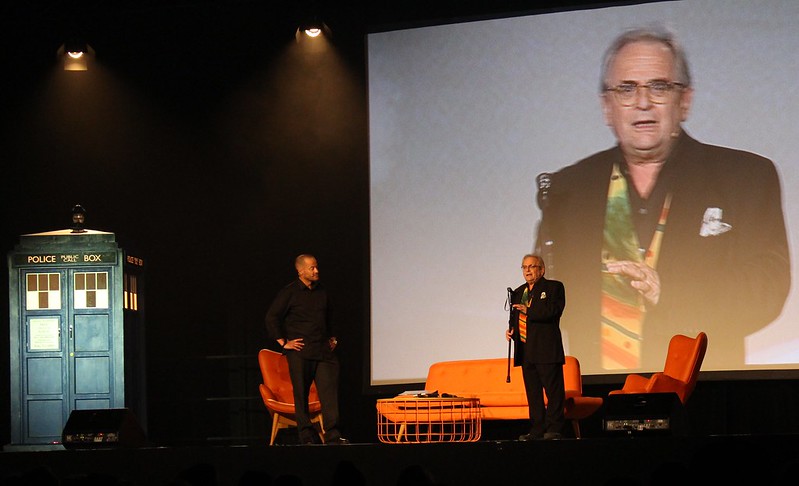 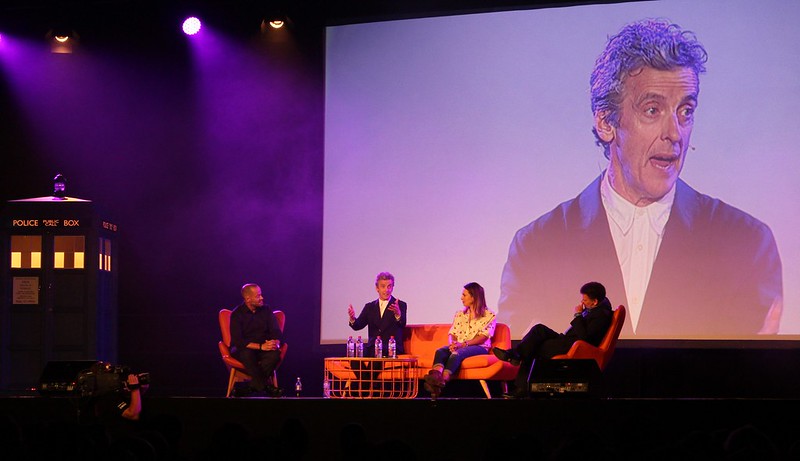 After a circuit, we went into the Sylvester McCoy session — which was very entertaining, as he strolled around the theatre taking questions.

We had pretty good seats despite not having paid the premium for the front section, so we stayed put in the theatre for a short time until the Capaldi/Moffat/Oliver session started. Before it was a trailer for the new Sherlock episode, which got applause from the audience.

On stage, Moffat noted that it would be a good idea not to talk about the climactic events of the latest episode, given many wouldn’t have seen it yet. Oliver said the first time she really appreciated the popularity of the show among fans was seeing lots of people dressed up as her character. They took some pretty good questions… though the one that got the biggest laugh was when one little kid asked Capaldi how much longer before he’d be quitting.

After that we grabbed a bite to eat then went back into the hall to join a long queue for photos with Capaldi. These had been pre-booked at $60 a pop, which seems to be the going rate for a photo with a star of this calibre. Churning through one about every 30-45 seconds during a session lasting a bit under an hour must mean a fair wad of cash is collected, though a whole infrastructure of queues and staff is needed to make it all run smoothly.

It must be a bit exhausting for the star, but he seemed to be managing okay. He was chatty with everybody, greeting them by name (with help from assistants), and he seemed to have figured out a range of poses for photos that would make the punters happy.

I told him I was enjoying his stint as the Doctor, and I loved him as Malcolm Tucker too. I don’t know if he was taking it all in, but we posed for a simple handshake (other people got more “in-character” poses). So here’s me making a deal with Malcolm Tucker: 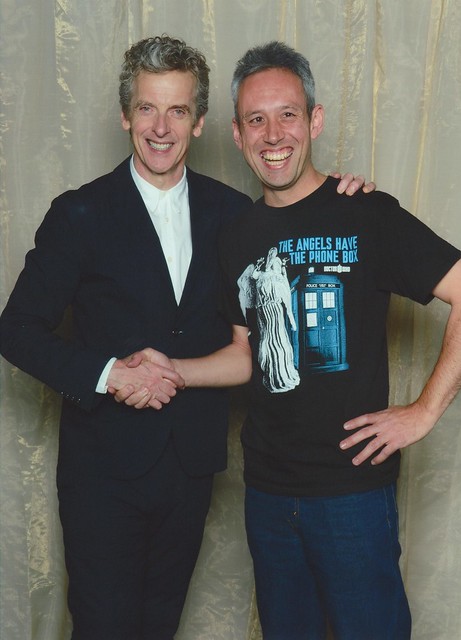 After collecting the photos that we wandered around a bit more, before looking in on a special effects presentation.

Special effects whiz Danny Hargreaves blew bits off a “stunt Dalek”, and with the help of some audience members and a sonic screwdriver, had sparks flying off a Cyberman.

By then, we’d just about had our fill of Doctor Who.

Was it worth $195 each? Well, you know, YOLO. The boys were delighted. I refrained from paying the $170 additional for premium tickets (which gained you a showbag, access to a “lounge” and a fast track queue to good seats up the front of each session). 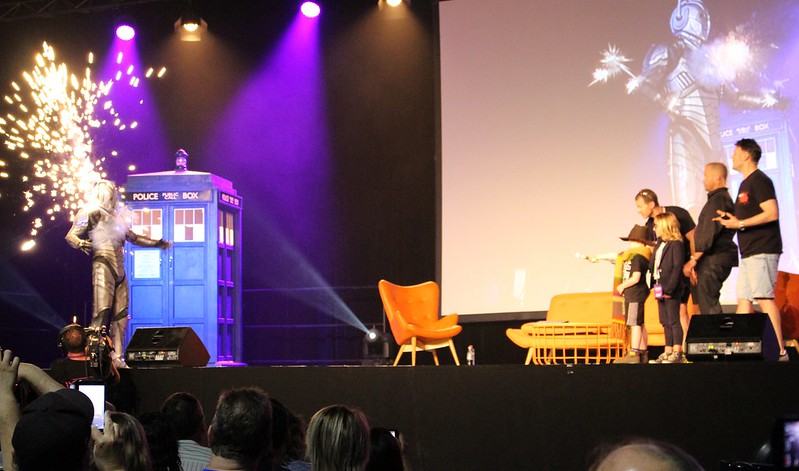 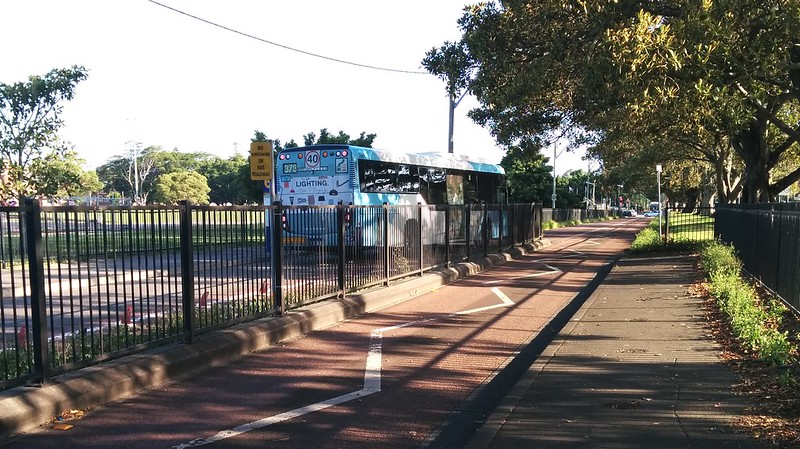 Eventually it was time to go; we headed back to the bus stops, and were about to cross ANZAC Parade to wait for a bus back when we saw a bus approaching on the parallel bus way. I’m not clear on why some buses do and don’t use it, but it took us back to the hotel for a bit of a rest.

Time for dinner: I thought we could catch the ferry to Manly and have fish and chips — especially as we’d hit the ridiculously low Sunday Opal $2.50 cap, so all PT would be free for the rest of the day.

The Manly ferry only runs every 30-40 minutes at that time, so I checked Google Transit for the quickest bus to Circular Quay. It showed a “5 CC” bustitution service that would take us there — but while I’m pretty sure we were standing at the suggested bus stop adjacent to Museum Station, the regular 5 CC buses didn’t stop there. After seeing a few of these zoom by (and other buses not going to Circular Quay) we walked up one stop and quickly got a 5 CC to the Quay… only to miss the ferry by a couple of minutes. 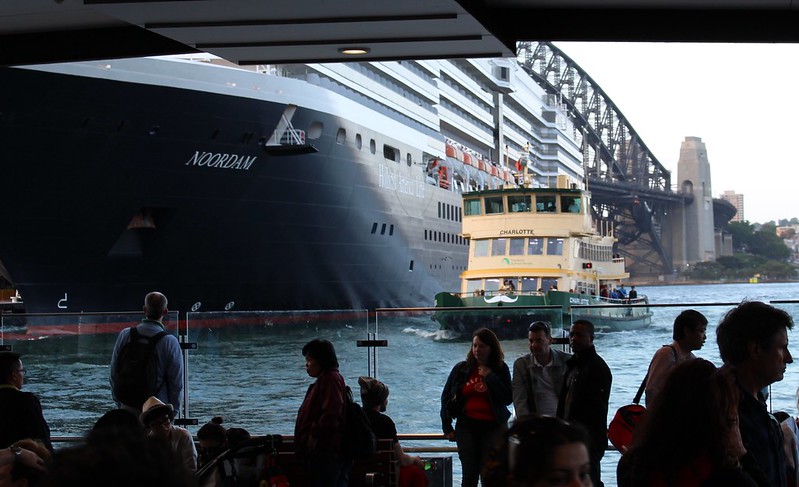 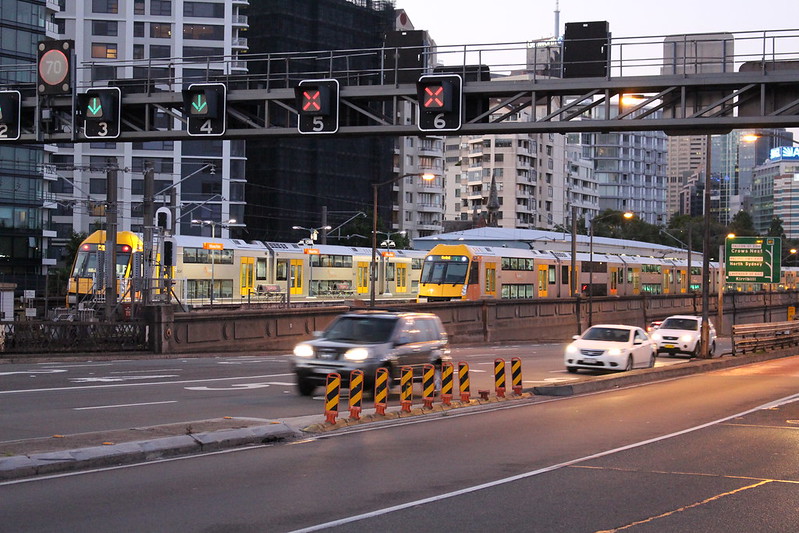 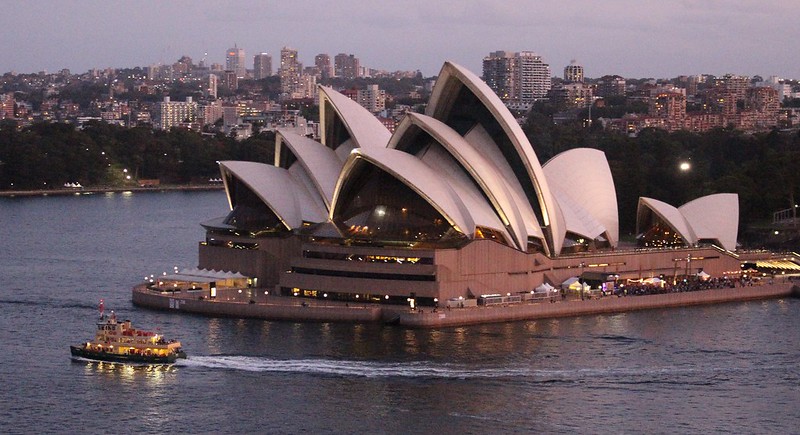 Another ferry for Milsons Point was leaving shortly, so I identified via Google Maps that there was a fish’n’chip shop nearby to there, and we caught that instead. Dinner in the park under the northern end of the Harbour Bridge, then we walked back across it at dusk.

A further walk through the CBD, via a supermarket to get some fruit to eat and also something flat for storage of our precious printed Capaldi photos, then back to the hotel for some sleep.

Did you order potato scallops?

Next time you’re in Sydney, it’s worth trying out one of the realtime transport apps like TripView or NextThere. They are a little harder to use than Google Transit, but use real time data rather than just timetable data. There’s a free version of both those apps.

[…] you pass into the exhibition hall, which is a bit like the Sydney Doctor Who Festival we went to in 2015: Lots of displays, costumes, monsters, models from the series, both the […]