When I book hotels, I treat location as the highest priority. I’m aiming to make it easy to get around the city we’re going to without a car. For this trip, I was aiming for easy access to: Hordern Pavilion, Sydney CBD, and the airport. Anything else was a bonus.

We’re talking about a situation where being 500 metres further from a railway station may mean a long miserable walk in the rain. Many of the travel web sites don’t make this easy: LastMinute/Wotif/Expedia (and I group them together because they’re all actually the same company — they have the same results just shown slightly differently) make you click around a lot to see different options on a map. Am I the only one who prioritises location like this?

The other difficulty sometimes is finding a hotel that can accommodate three single beds. I suppose I could just book three single rooms, but the cost is likely to be prohibitive.

I ended up booking at the Travelodge in Wentworth Avenue — it was okay last time (way back in 2006); they had available rooms, and in-house breakfast — which would be worthwhile on the Sunday when time was going to be short.

It turned out to be a good choice. It’s not a luxury hotel by any means, but it does the job. The breakfast buffet was good and plentiful, though not terribly exciting. The WiFi worked okay (a 100 Mb limit is pretty low, but I knew we’d need to cough-up $9.95 for 24 hours of unlimited bandwidth on the Sunday — more about this later). The only niggle I have is that they clearly don’t have enough lifts working, as one was out of service for the entire stay, resulting in queues at busy times. 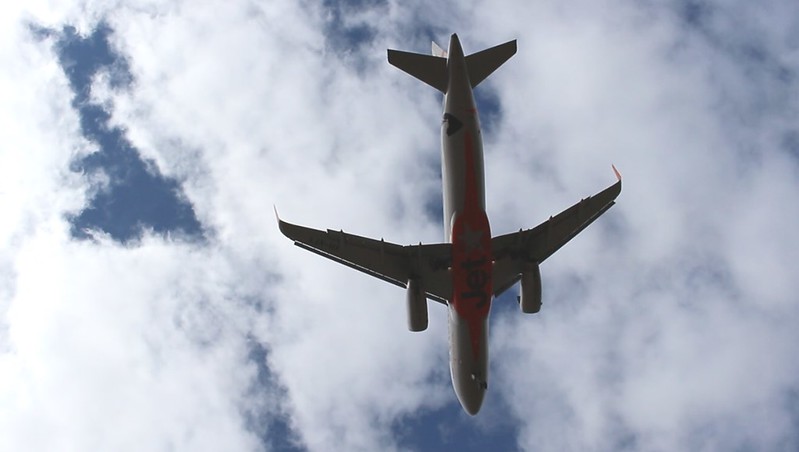 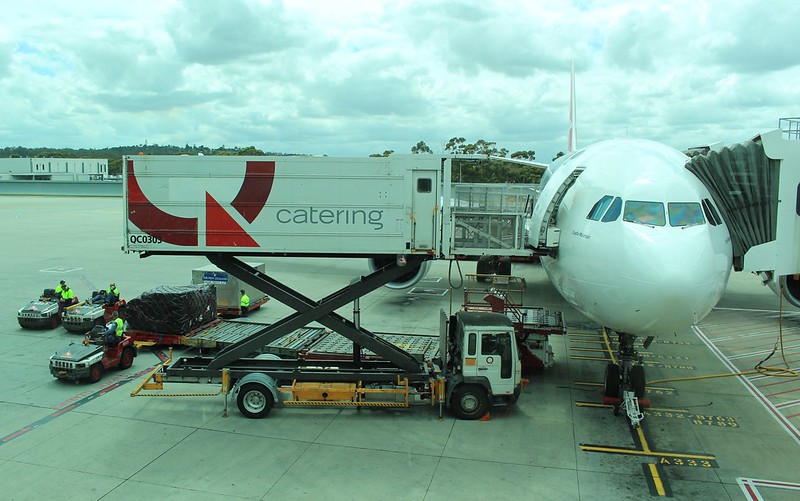 After agonising about how to get to Melbourne Airport, the final straw was discovering the Frankston line was closed for works on the day we were flying out. (Philip left a comment on that blog post that also helped convince me: in short, it’s not a sin to drive once in a while when PT is awkward. What really counts is your daily travel, eg the work commute — which for me is always PT.)

So I pre-booked parking in the Airport long term car park. As I went through the booking process, I noticed it asked towards the end if I wanted to upgrade to the short term car park, at a rate which may or may not have been cheaper than the usual short term rate. That might be one for the bargin-hunters to investigate.

We were a bit early getting to the airport, so we went a little further to the aircraft viewing area, just north of the north-south runway. We watched a Jetstar plane landing. Kind of spectacular to see that close up.

Back to the airport and into the long term car park. The entrance locations encourage you to park up the back, but thanks to Roger’s comment tip, we looked for a spot at the end closest to the terminal, and easily found one. The shuttle buses run every 4 minutes apparently, but we walked to the terminal instead. The route is slightly circuitous, but easy to do, and you get to see the sights — like the taxi queuing area, and the new Terminal 4. Woo hoo. 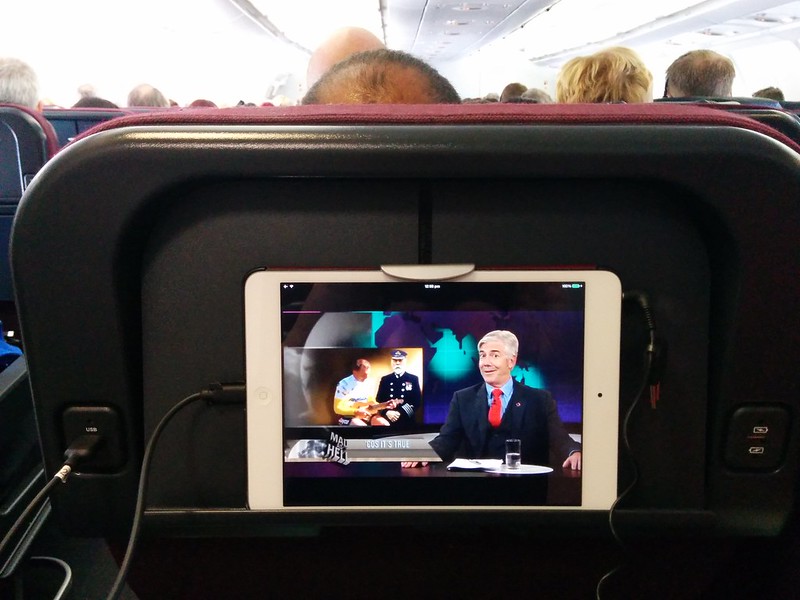 The flight itself was uneventful, apart from a bit of roller-coasting as we took off — well, we were in the back row. They had personal iPads for entertainment, with a clip thing to attach it to the seat in front of you. Hopefully the clip doesn’t cause injuries in the event of a sudden landing.

I deliberately booked the flight up knowing we’d be served lunch, and back knowing we’d get dinner. Not that airline food is ever outstanding. For the trip up it was a spinachy cheesy pastry thing. Very tasty, but not exactly a gourmet lunch.

I had gum to chew during take-off and landing to try and reduce the effect on my ears. I’m not sure it helped very much, but at least the gum serves as a distraction for any nerves. I noticed my chewing sped up markedly during take-off.

After landing, we went down to the railway station, bought another Opal card (we had two already) and topped them all up to cover our planned travel (though it’s a bit hard to estimate how much one will use). Onto the train, which terminated at Central as the City Circle was closed for upgrade works.

This meant a 15ish minute walk to the hotel from Central instead of a 3 minute walk from Museum, but the weather was fine, and we got to see the Grand Concourse of Central Station, which was pretty nice. How come they’ve managed to have it looking so much nicer than Flinders Street’s concourse? 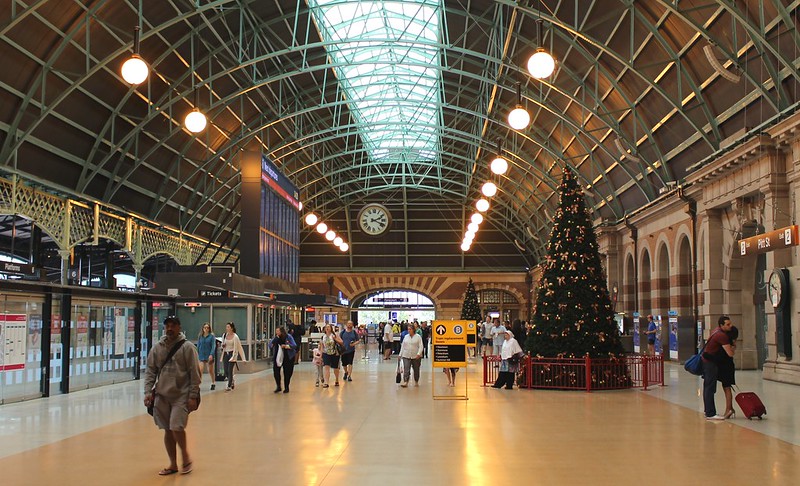 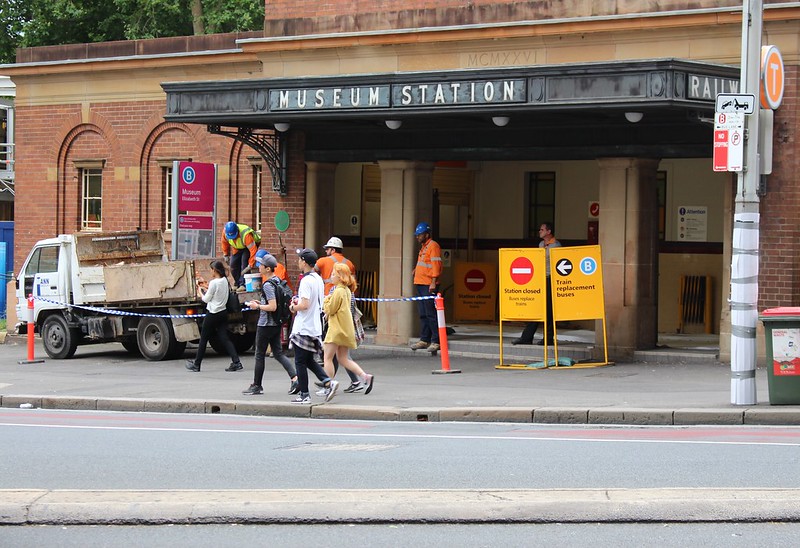 After checking-in and dumping the bags, and a bit of a rest, we headed out again.

We had a detour as we realised some things had been missed during packing: socks, underpants and PJs for one of our number. We walked around looking for somewhere to buy said items, and ended up walking back down past Central and UTS (there’s some spectacular architecture on the way, in particular the Central Park building) to Broadway, were we found a K-Mart to buy said items — as well as a Doctor Who pop-up shop. 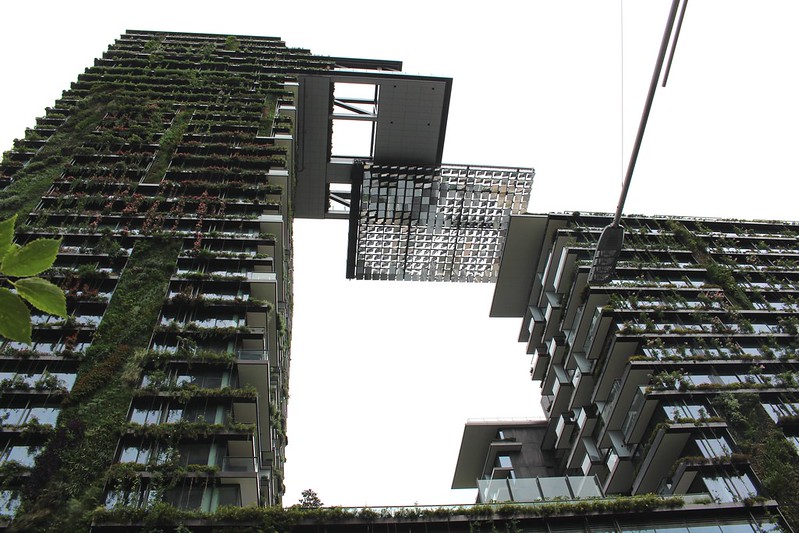 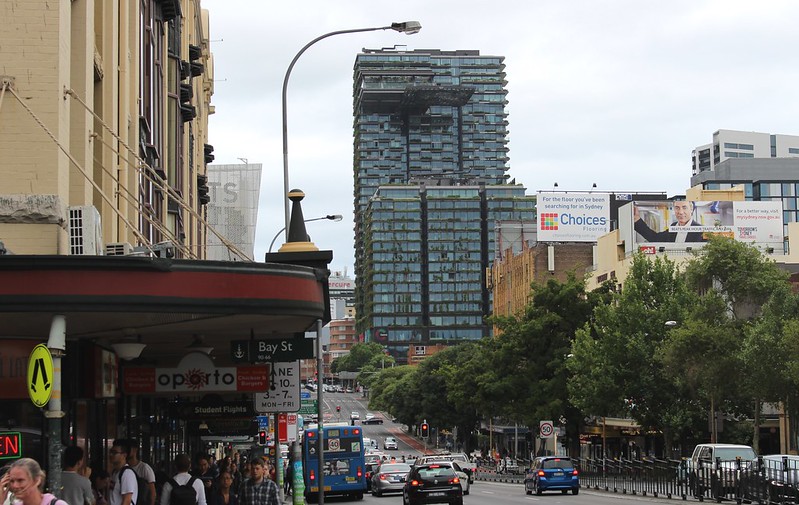 It was a reasonably long walk, so using Google Transit I figured out how to catch a bus back, which almost worked, though it took a slightly different route through the CBD than expected… hmmm…

We dumped our shopping back in the hotel and then walked a bit more into the CBD, finding Town Hall Station and hopping onto a train headed south.

The plan had been two-fold: visit a shop in Penshurst where they have a retro gaming “museum” display, and then get dinner at Sizzler in nearby St George (near to Carlton station) — which isn’t gourmet either, but the boys had been quite taken with the concept of All You Can Eat after our Perth trip — and they don’t have any Sizzler in Victoria anymore.

Alas, thanks to our shopping detour, time was racing on, so we saved Penshurst for another day, and went straight to dinner. The Sizzler has a multi-storey car park (I’m sure I’ve remarked before that the best restaurants don’t have car parks) and it was actually quite difficult to find the pedestrian entrance. It’s as if having eaten enormous amounts of food, the last thing they’d want is to let you walk any of it off on the way home.

And so we feasted — it’s tasty enough, but as I said, not gourmet — and remember, don’t eat the bread — it’s a trap to fill you up. Interestingly I seem to remember the Perth outlet serving pizza slices, but this was mostly variants on salad, as well as pasta. Afterwards we walked back to the station and caught the train back into town.

A further walk from Town Hall back to the hotel, then we settled down to rest after a full day, and watch O Brother Where Art Thou on SBS — one of my favourite movies.

10 replies on “Short stay in Sydney: day one”

About the bus taking a slightly different route through the CBD than expected: pretty much all buses that go through the CBD had their routes changed from early October when George St was closed for buses – in preparation for the light rail works. But I’d expect Google Maps to have those changes already…

” but thanks to Roger’s comment tip, we looked for a spot at the end closest to the terminal, and easily found one. ”
Glad my normal ranting on your blog was constructive/useful for a change.
The central park building looks spectacular – great pic.
Look forward to further coverage of your little holiday.

“It was a reasonably long walk, so using Google Transit I figured out how to catch a bus back, which almost worked, though it took a slightly different route through the CBD than expected… hmmm…”. Yea, I’d put this directly on the George st bus route changes.

“bought another Opal card (we had two already) and topped them all up to cover our planned travel (though it’s a bit hard to estimate how much one will use). ”

Remember with Opal, the maximum for a single day is $15 and once you hit 8 distinct journeys (intermode transfers count as 1 journey) in a mon-sun period the rest is free.

Ideally if you arrive early in the week, you can rack up the 8 trips in two days as a tourist with plenty of short bus/light rail trips

@Wilson/@John S, I think you might be right about the bus change… Either that or I misread the map – checking it again today on Google Maps, it now seems to match where the bus took us on Saturday.

@Anonymous, yeah I knew about the 8 journey cap – we actually reached 5 on Saturday and Sunday, and got another 2 done on Monday.

As I understand it, any transfer less than 60 minutes is counted as one journey… but of course, changing modes charges you another fare, which they really should fix.

Perhaps Sydney’s central station is in better shape than Flinders St, because they only have one of them.

Meanwhile, in China, they are building gigantic new stations for the highspeed railways, miles and miles from the centre of the cities which they service. All those clowns who think high-speed rail between Sydney and Melbourne is the answer to their dreams, who claim that high-speed rail will run “city centre to city centre”, will be in for a great surprise. [ how many people actually travel “city centre to city centre”, and isn’t Sydney Airport, at least, already at the “city centre” ?? ]. At least it is good to know that Australia is not the only home of town planning mistakes.

The reason Central Station is in better shape than Flinders St is that it is not a straight comparison. Central is both a regional/interstate terminus and a through metropolitan station, more akin to Southern Cross. A more apt comparison with Flinders St is the metropolitan platform concourse at Central, and grand it ain’t. Also, the Central terminus is somewhat detached from the surrounding area, unlike Flinders St/Southern Cross which sit on very busy intersections, so less people will head through it. That probably leads to the last reason, there is no need to fill the area up with coffee shops if there aren’t enough people who pass through, allowing it to stay in better shape.

@Wilson/@John S, just a follow-up on the bus/Google Maps thing: I found a screen shot of the Google Transit trip plan, which clearly shows it thought we’d be getting off the bus at Museum Station Stand E, Downing Centre, in Elizabeth Street: https://www.flickr.com/photos/danielbowen/23293315925/

Always try to go to Happy Chef at Eating World in Chinatown. Even after 11 years I went back there again. I did not deal with the humidity that well and also fell over on the street in Newtown. Newtown is pretty good to stay in I found.

[…] the past for hotel bookings I’ve used LastMinute/Wotif/Expedia — they’re all the same company, showing the same results using slightly different fonts and icons… This time around I wanted […]