I’ve been watching The Killing Season, the story of Labor and the switches in power between Rudd and Gillard. It’s really good, and episode one goes into some detail about the Global Financial Crisis, and the Rudd/Swan stimulus packages (two of them, totalling almost $60 billion) to fight it off.

The stimulus package was intended to spend money fast — the school halls and home insulation programs were evidence of that — some good outcomes from better school infrastructure and improved energy efficiency in thousands of homes, but fundamentally rushed and poorly planned.

Something that people might have forgotten is that Regional Rail Link was funded as part of the stimulus package. The Victorian government bureaucracy had been throwing the idea of a “Tarneit bypass” for the Geelong line for some years, in association with extending the Urban Growth Boundary to to encompass it.

If the GFC hadn’t happened, and if RRL hadn’t been close enough to ready to go (despite it being described later as costed on the back of an envelope) it may not have happened. Or at least, it might still be on the drawing board, perhaps overtaken by the Metro rail tunnel. 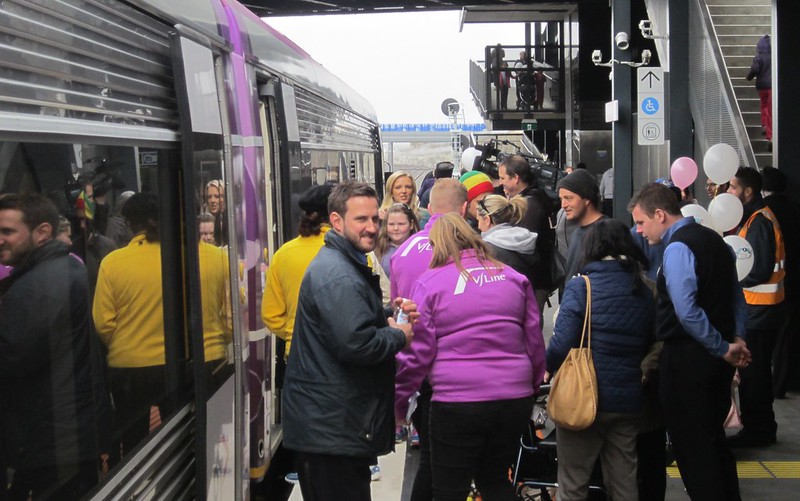 Even with the haphazard pre-planning — and for years the PTUA tried without success to get answers on the proposed changes to train schedules as part of it — it’s turned out well, perhaps far more so than the school halls and home insulation.

There are similar travel times from Geelong, despite the longer distance. Yes, they could have prioritised faster express trains, but these eat up track capacity, reduce frequency/service to skipped stations, and save little time (a minute or two per station). Thankfully, lessons have been learnt since the Regional Fast Rail project’s “flagship” trains — which were a near-pointless attempt to provide a single fast train per day from the commuter-belt into Melbourne. There’s some express running, but regular, more frequent services are far more valuable to users. 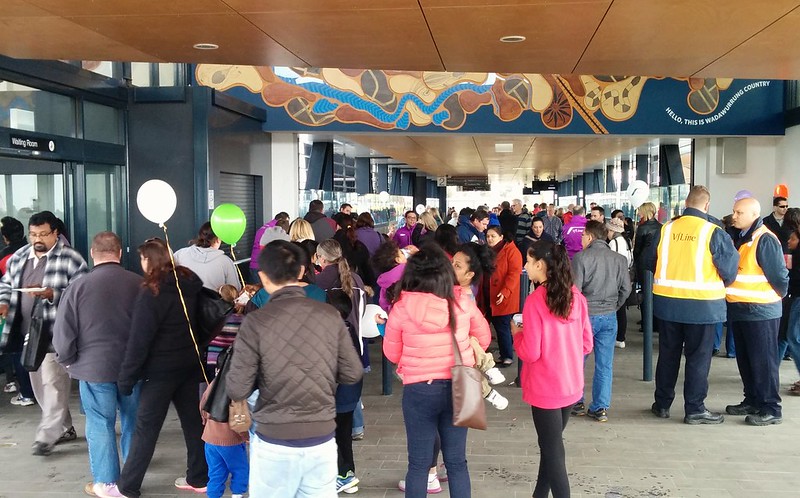 Importantly, the new stations (plus Deer Park) in the growth areas get decent rail services (at least on weekdays), with trains every 20 minutes most of the day, and timed connections to and from a re-designed local bus network.

I went along to the Wyndham Vale station open day on Saturday. It was very busy, with obviously a lot of interest from the locals, and (as at the opening of Lynbrook some years ago, overheard some saying they planned to start using the trains to get to work).

And there’s finally been some promotion of the new line, with flyers going to locals, and extensive newspaper advertising. (Now, when will they tell the Melburnians that trains run every 20 minutes to Geelong on weekdays?) 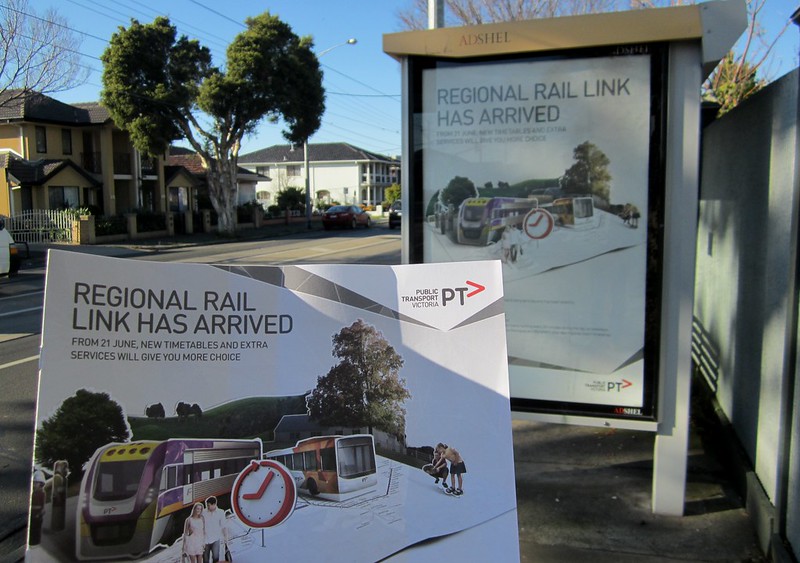 There are niggles: connections to Werribee and North Melbourne may be difficult for some passengers.

And crowding may be an issue at peak times for trains originating in Geelong and serving Wyndham Vale and Tarneit — hopefully PTV and V/Line will monitor this carefully and deploy extra carriages as they become available.

Indeed, the Wyndham Vale Leader says the 6:31am from South Geelong (7:10am at Tarneit) was looking pretty crowded this morning:

Already packed carriages with people standing in the 7.10am train #RRL #Tarneit pic.twitter.com/sSL8HmFiBw

The separation of V/Line and Metro should help with the reliability of both, and provides extra capacity. But on the Metro side of the fence, almost none of this is being used yet. (From what I understand, they have enough metro trains available to do a lot more.) 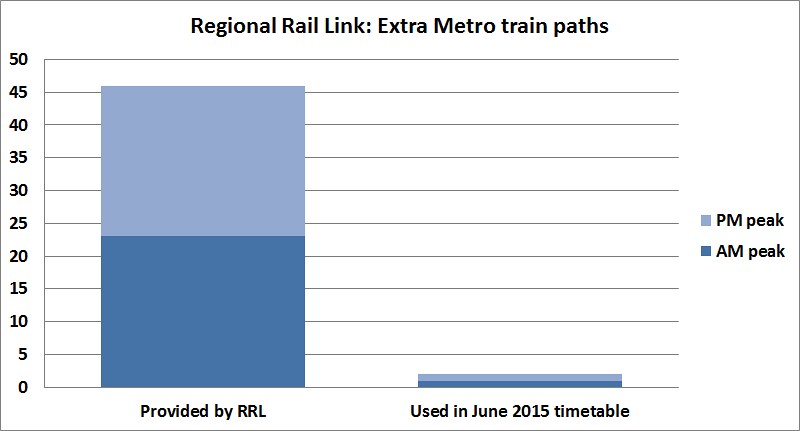 On Metro, and elsewhere, numerous changes were expected with this timetable change, but have apparently been postponed until later in the year:

Hopefully it’s full steam ahead on these important upgrades to keep the network improving.

It would have been far better to remove level crossings instead.

Hope the next stimulation program = extending the RRL to MEL airport. Or the Victorian government should buy 51% of Avalon Airport, build an international terminal there, and extend the RRL to finally give us an airport with a 160km/h rail link.

She could not think beyond cars, roads, panel beaters.

Has there been any explanation as to why the comprehensive rideable rewrite couldn’t happen in association with RRL opening? They’ve hardcore than enough time to get the timetable ready, and asylum say, thecapacitynow exists. I’m assuming it’s purely apolitical move – making sure that the inevitable teething problems that would happen with a rewrite aren’t by default associated with RRL, turning a good mews story into a negative one

Damn predictive text! I’m hoping you can translate that gibberish!

So, passengers from Tarneit had to stand for 27 minutes? Of course, it would be nice if everyone had a seat, and hopefully, additional capacity will be added on the RRL, but plenty of passengers on Metro regularly stand for nearly as long as that every day!

@Marcus, good point – it was hoped that if the Metro changes had gone ahead, it would have included 10 minute services to Sydenham (20 to Sunbury) as the next part of the rollout.

@Jacob, the problem with Avalon rail has always been: do you run a branch from the Geelong line? If so, how do you service it? Halve the services to Geelong? Or do you build an expensive bypass and run every Geelong train through it, adding to the travel time?

@gobillino, loving the auto correct! It really is a good mews story!

@gxh, standing is common on Metro services, but bear in mind however badly the Metro carriages are designed for standees, V/Line carriages are even worse – virtually nowhere to hold onto. That said, it shows the demand is there from day one, and they’ll need to deploy more carriages. It also probably shows they were right to postpone a few weeks for more carriages to be available.

@Daniel – suburban trains have ‘club’ style seating, so any grabholds on the tops of seats are few and far between.

I’ve found the standing on VLocity trains is actually easier, thanks to the large grabholds on each row of seats.

Not to mention there are the luggage racks that provide two level seating. :-P

I agree with Marcus, for two reasons. Absolutely agree with him that the hand holds on the back of the V/Locity seats are generally easier to hang onto than the similar ones in the metropolitan fleet because the seats are higher. But the other reason is that most people are heading to a common location (eg. Southern Cross), which means people are more likely to move down further into the train. One of the things that I learned from the 601 bus is that you can get a lot more people into a vehicle where everyone is headed the same destination they’re more likely to move right down inside the vehicle. The AM peak is generally more congested than the PM peak – which has benefits as most passengers are heading to Southern Cross.

It will be interesting to see how long it takes for Tarneit, Wyndham Vale, Deer Park and Ardeer passengers to work out they should catch the services that start from Wyndham Vale. There was a decision made to include in the public information that was distributed out at Wyndham Vale and Tarneit information which services were the short starters (they are marked with an astrix). I think it will take a few weeks, but hopefully people will more evenly distribute themselves between these services. And of course, as more carriages arrive then trains can be lengthened.

Deferring the April timetable was political, but not to disassociate it from RRL teething problems. Rather, it was because the Labor party didn’t like some aspects of it (the design was complete before the election) and wanted it altered. And they weren’t in a hurry to implement a modified version, for some reason (saving money?) Even the additional Werribee trains were added under sufferance; more were offered, but will instead be additional trains on standby.

By the way, one other change with the new timetable was the introduction of the new Calder Park stabling yard.

Re Avalon-
how about extending the Werribee line to Lara then curving around to a north- or east-facing Avalon terminus? In the long term it could be converted to clockwise ex Werribee and anticlockwise ex Geelong Metro. That would solve interchange problems with the RRL.

@Adrian, is there a rule of thumb for how long it takes for the patronage to settle into a regular pattern?

Still, it may have been better for them to have funded the Melbourne airport link.

While the RRL is a positive project, would there have been a better or more important project??

Also, there are some ‘short and missing links’ that I would love to see fixed. Top of the list shall always be route #3 extended to East Malvern R/S, and extending Alamein line there too.