This Friday 7th February is Melbourne’s re-tune day for digital television. This is when the frequencies of some channels change, so they can make more efficient use of the spectrum.

If you don’t re-tune your digital TV devices, you may find some channels don’t work after this. Hopefully most people will figure out how to do it. 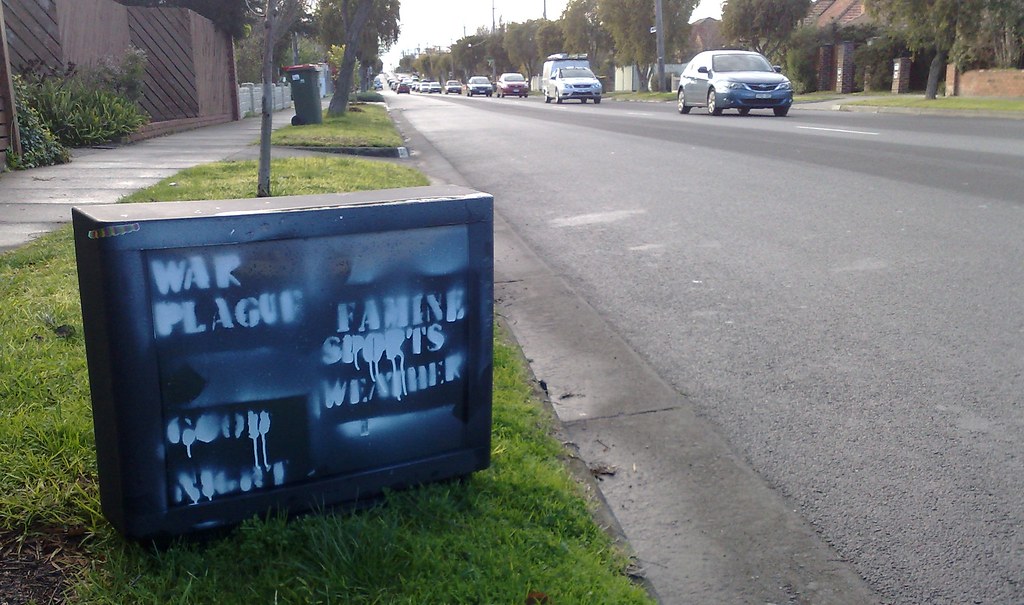 The whole shift to digital TV, and the shutdown of analogue services, has been interesting to watch. Once the benefit of the extra channels were there, it seemed like there was a stampede of people switching.

It’d be interesting to know what the next planned stages are. Will we move towards all HD channels? It’d certainly be nice to make use of the available technology to get that higher quality.

Digital TV is one of those changes that governments implement from time to time to help the country move forward, and it’s nice to know that — despite some rightly highlighting issues with it — it’s gone ahead relatively smoothly, and without the kind of luddite response to change that you see in some other parts of the world.

Other similar changes that spring to mind from recent decades:

The USA’s near-paralysis on some of these types of issues is an interesting contrast. They’re one of a handful of countries steadfastly resisting metric despite the economic benefits, they still have 1 cent coins and $1 notes despite inflation, their telephone numbering system is a complete mess with more and more cities now having multiple area codes…

But they have managed to largely migrate from analogue to digital television — and might even have more free-to-air HD channels generally available than we do.

And of course, the USA leads the world in other ways, particularly around innovation, so I don’t know if these things are necessarily holding them back, but you’d have to wonder how much better they’d do if their government was able to push ahead with basic technological reform.

The transition to 8 digit phone numbers happened in the 90s :)

Personally I think Australia has demetricated in the last 15 – 20 years. People too young for imperial still talk in miles and inches. TV screens in the ’80s were advertised in metric. Computer monitors now are advertised in imperial.

I thought the re-tune only affected SBS?

The US did try to implement the metric system in the mid 70’s. I can remember being introduced to it in school at the time. I even remember seeing some service stations with metric liter gas pumps installed. For whatever reason it never caught on. It just may have just been too costly and unpopular to change such a large country. Oddly enough the military has switched to metric to be compatable with other countries in joint exercises.

It is true that many cities have several area codes and some (like Miami) have switched to 10 digit dialing too (3 digit area code and 7 digit number). Mobile/cell phones do not have a seperate area code like in Australia and one cannot tell by looking at a phone number whether it is a mobile phone or a landline as both will use the same local area code and have the same 7 digits. Years ago each state had it’s own area code and some large or heavily populated areas such as New York City may have had 2 or 3. All of the new pagers, fax machines, and later mobile phones used up all of the available numbers so more area codes were added over time. Australia’s solution of adding an extra digit to a phone number is a good one but since the US is so much larger more area codes are probably necessary anyway.

More HD channels – that is funny.

The current stations don’t use the current ones. AFL grand final and cricket are both in standard definition – yes they have to display in SD (legislation) but they could simulcast in HD instead of shows not even in widescreen on the HD channels.

They should hold auctions for the new channels – allow other players into the free to air market.

@Peter, yeah I think computer screens being measured in imperial is the influence of the USA showing.

@Jed, it’s true that the USA has a lot more large urban areas than Australia. I’d have thought the logical answer was to extend local numbers to 8 digits as we did in the 90s (so within each city you could have local number dialling without the area code), but also keep the 3-digit area codes. Perhaps it wasn’t that simple.

By the way, the UK is another interesting case… they started down the path to metric, but have officially remained on imperial for distances/speeds (eg road signs) and some other measurements.

The young people I know all use “imperial” for personal height, but that’s it. My nephew is a driving enthusiast but I have never heard him mention “miles” for either distance or speed.

Errrrr, how can we possibly get more HD channels? The existing channels are compressed to insanely ugly and borderline unwatchable levels as is to fit as many channels as they do per transmission tower… including the HD ones, might have higher resolution but the incredible amount of compression makes it pixelated to all hell whenever there is any fast action (sports, panning, etc) or high detail (eg grass, leaves, etc).

Even when the V8s are on Seven’s HD channel 7mate it pixelated to all hell and back – watching the *cough* raw satellite feed on the other hand is like watching a Blu-ray, absolutely gorgeous!

It’s the switch to secondary freeview protocols that will fix that, but I haven’t heard any talk of that happening anytime soon?

I remember in late 90s we had to add the ‘9’ in front of our phone number!

I see the benefit of having the extra channels, but I’m sick of getting nothing but pixelated drop outs. Back in the good old days you’d get a bit of static and move the rabbit ears around a little. Now it’s change channel or just turn the tv off and read a book when it gets too bad. I very rarely get channel 7, it’s always “no signal” or cutting out so much you can’t watch it. I miss analogue.

US use of $1 notes isn’t such a bad thing, at the very least they are handy for tipping. After returning from a recent trip I was shocked by how enormous our coins are in comparison to the nickels/dimes/quarters I’d picked up over there. How did we end up with such huge coins?

I’m not sure if it’s a big issue, but it’s interesting that cheques have survived even though there have been so many other changes to the way in which we do our banking. I think I’ve read that they’re on the way out in Britain, so I wonder how long they will last here.

@ghx – I think it is safe to say that cheques are well and truly on their way out here too. I remember when it was routine for people to pay for their groceries with them. Restaurants would also usually accept them. I imagine the big supermarkets would still accept cheques, as they’re bound to get some people stuck in their ways; but I’ve probably used a total of three cheques in the last two years, all from the government, and all simply banked.

The banks are to be dragged screaming and kicking into the Proper Electronic Age: transfers between bank accounts will happen in minutes or hours instead of days. Does anyone know whether that also applies to Bpay (which currently takes 2-3 days and is important for pre-paid phones, and why Myki says 5 days to top-up by Bpay). Now that’s something that will really advance Australia.

The NANP countries (US and Canada) really stuffed up the mobile phone situation – it is incompetence of criminal proportions. Not only did their approach cause many cities to run out of telephone numbers (triggering multiple area codes per city), but because there’s no way of telling a mobile number, the billing system can’t tell either. So the network providers have to recover the cost by charging mobile subscribers for incoming calls.

New Zealand used to have large coins (much the same as Australia – but the $1 and $2 were the other way round, and the 50c is round), but they ditched all that a few years ago, for much smaller coins. There’s no NZ5c coin any more, and coins range in size from our 5c piece to our 20c piece.

I’m old enough to remember the metric conversion of speed signs in New Zealand. They stickered over the numbers, added a “km/h” sticker, and sent out little stickers you could paste onto your speedo. Then came the slow replacement of stickered signs as they wore out (or were stolen for the 7th form/year 12 common room at my school!).

It seems to me entirely reasonable that mobile phone users pay for incoming calls.

I have changed my two TV sets to the new system but can not record or pick up SBS on my DVD players?

@Gary, if your DVD players/recorders also have tuners, then of course they too need to be re-tuned.