So, how did my old wooden house cope with the heat?

It’s not brilliant, but it’s also not unbearable.

I was at home most of Tuesday, and graphed the temperature rise. Inside temperature from the thermostat / Outside from the BOM Moorabbin Airport readings. 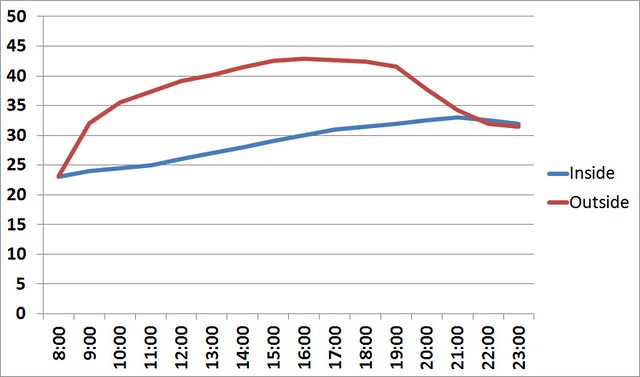 Unlike last time (2010), the overnight temperature had been a lot warmer, and thanks to this being just day one of a four-day heatwave, in the evening it didn’t drop off allowing the house to cool down.

The roof insulation that we have now made a little bit of a difference I think, but undoubtedly we saw the inside temperature slowly rise across the day. Better window protection is what’s really need to fight off the heat coming in, I suspect.

The additional fans we have make a real difference to comfort levels, even if they don’t seem to affect the temperature reported by the thermostat. Ceiling fans in two main rooms (plus a third in one of the bedrooms) plus portable fans help make it bearable.

Overnight Wednesday/Thursday the outside temperature dropped a bit more — down as low as 24 at midnight — allowing us to cool the house just a little from outside. As I write this, the thermostat reports 28 degrees. But to really cool the house will have to wait for the cool change on Friday afternoon.

(By the way, if anybody had an appointment at the mobile Blood Bank in Bentleigh this week, they’ve cancelled the session due to the heat.)

— Stuff like this makes me ponder that it’s a little unfair that some areas likely to see power cuts caused by the stress put on by those with juice-hungry air-con, but which affects everybody — whether or not they have air-con, and whether or not they are offsetting their grid usage with solar. Surely in the age of smart meters, they could limit everybody to X kilowatts off the grid?

This makes me feel a bit better about my investment in a double-brick property. Whilst the house is undoubtedly warm, and will likely take a while longer to cool down than it’s weatherboard cousins, I haven’t seen the inside temperature top 28 yet. It has been pretty much consistently 27 yesterday, overnight and this morning. Of course, we’ve still got two more days of heat, so those bricks might continue to heat up.

As for your statement regarding smart-meters and unfair forced power outages: it is one thing to measure how much power each individual household is using, but I can’t think of an easy way to remotely limit the amount of power individual houses can use.

Thanks for posting your data! I’ve been keeping an eye on our indoor and Melbourne temperatures this heatwave (being housebound for the whole heatwave). Our concrete low-rise apartment in Southbank has peaked around 30 degrees.

We have air conditioning but haven’t turned it on. Instead, we’ve been closing windows and shutters during the day, running the AC’s fan at night (when the indoor and outdoor temperatures are basically the same), and draping wet towels across the shoulders!

You may like this website that we’ve been using. It graphs the BOM’s Melbourne temperatures as they update — http://www.baywx.com.au/melbtemp.html

Once smart meters are installed, we can take the step to Demand Response Technology. This gives us the ability to turn on and off appliances and industrial processes so that electricity use is staggered. So instead of everyone coming home at 5:30pm and turning their AC units on, we can turn some houses on at 4pm, 4:15pm, 4:30pm, 4:45pm and so on.

From a cost of the network point of view, it would save us all a lot!

The technology exists — implementation is slow (not surprising, considering how freaked out some people were just by the installation of smart meters). I think the places closest to getting it going are Texas and Auckland.

Last night, the first time ever, I had a fan blowing on me all night long.

Just a moment ago on 3AW, Metro has asked people to leave the city early, before the peak period if possible. Metro fears a network failure during peak period.

When I lived in Florida I had a power demand control box installed that connected to my central (ducted) A/C and electric water heater. Florida Power and Light (FPL) could send a radio signal over the power lines that would interrupt the compressor on my air conditioning (but not the indoor fan) for up to 15 minutes and the power to the water heater for up to an hour in periods of high demand. For having this load control installed I got a $12 credit on each month’s bill. With many thousands of these boxes installed they could really make a difference in power demand. I never noticed any difference in my A/C or hot water supply. I alrerady had a timer on the water heater anyway. I don’t think they used this load control that often because temperatures in Florida rarely go above 35C/95F and practically every home and business has A/C and uses it 10 months out of the year in Miami’s hot and very humid climate. Most people have an electric water heater in Miami too. FPL has been installing these load control boxes since at least the early 90’s and possibly before.

If a household is generating more solar power than it is using then, unless there has been uptake of a device to cut the solar power when the grid goes down*, the household should be unaffected by power cuts at that time.

* I once saw an invention of this nature on the New Inventors. It would reduce the advantage of solar power.

You have been, as usual, inspirational Daniel. This morning I have made a device to collect and record the inside and outside temperatures of my place, and I’ll let you know how that goes.

Tom, the reason for this, is that if there is a very local blackout caused by a tree falling on the wires or a car crashing into a pole ( the most common causes around here ), then they don’t want your solar power to electrocute the repairers after they think that they have isolated the section they are trying to repair from the network.
Personally, I think this is the wrong approach. There is no reason why these cutoff arrangement cannot be designed to allow consumers to continue to use their own power.