News from London is that they are planning 24-hour Tube services on five lines from 2015 at weekends.

It’s tied to a grand plan which will also see staff taken out of ticket offices (in favour of helping customers more directly, for instance with ticket machines), more Wifi on stations, and contactless bank card (eg Paypass) payments.

All interesting, but let’s focus on the all-night trains. 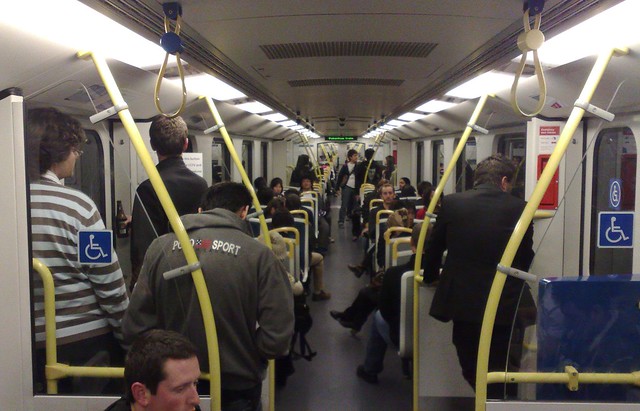 Running all-night services on weekends only is an interesting balance between meeting big city passenger demand, helping late-night economic growth, and still allowing time for maintenance — which can still happen on weeknights.

Here’s the interesting thing: early planning for all-night weekend trains appears to be already be under way.

For such a thing to happen, there’s any number of factors that would need to be carefully planned — maintenance regimes, rosters for drivers, signalling and support staff, stations, PSOs…

One obvious step is ensuring that any future development on the rail network doesn’t get in the way of it.

The planning for Southland station includes such a clause. In a document obtained via FOI by The Age, the requirements clearly state that the infrastructure should allow for a future timetable with trains running 4:30am to 1am on weekdays, and “Friday 0530 through to Monday 0200” — in other words, continuous services from Friday morning through to late Sunday night. 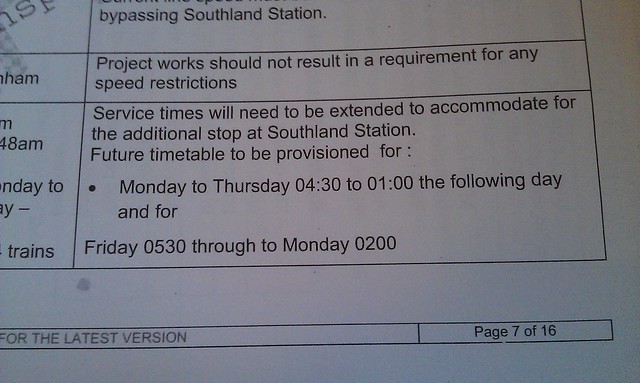 It doesn’t mean 24-hour weekend trains will be starting any time soon, nor that they would necessarily run on every line — a more likely initial outcome is the busiest lines only, where Nightriders don’t cope.

But it does appear that the early planning for it is happening now within PTV — ensuring that no new initiatives get in the way of doing it in the future. Great to see it’s on their radar.

Want to see it happen? Then get busy making your voice heard in the media and with your local MP.

Yes, I won’t be holding my breath.
The earliest train on a Sunday from Flinders St to Sandringham leaves the city at 8:12am. PTV currently believe that the demand for public transport prior to 8am is too low for even one earlier train. We are along way off 24 hour PT on the weekend

So two minutes after I stroll by your blog page, I then read this

Those dodgy english are stealing all of Melbourne’s good ideas.

@enno, umm yes, that article was linked from the blog post in the very first paragraph.

Link to the Southland FOI? Thanks.

@Bob, sorry, I don’t have an electronic copy at present.

It is about time we at least had the SmartBus network operating 24/7. We need only an hourly service at night.

Hey “VTP”, re: your unpublished comment, thanks for the info – I’m going to see if I can use this elsewhere.