For anybody with an NFC (Near Field Contact)-compatible phone (such as my new Google Nexus 5), you can use the this little app — Tag Info Lite to read Myki cards.

Not that it’ll tell you very much — see below. All the actual useful information appears to be encrypted. 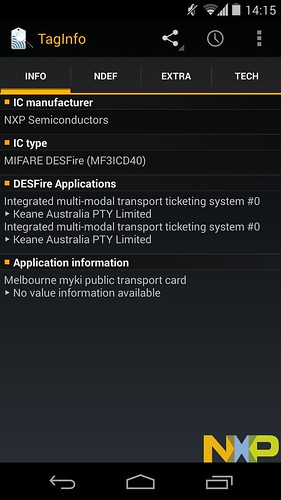 Apparently in some parts of the world an unencrypted copy of the card balance/status is also stored, allowing apps that will let you check your balance. For instance Farebot works with cards from Seattle, San Francisco, Singapore, the Netherlands and parts of Japan, and Travel Card Reader looks similar.

Shame Myki doesn’t appear to have this option, not even in PTV’s own apps — though I guess in theory they and/or Keane could do it, given they issue devices to Authorised Officers to do card checks.

With the old Metcards, you could easily see the expiry date(s) as it was printed on the card itself.

This is an opportunity, of course. As more phones include this technology, perhaps a future (hopefully minor) upgrade could allow people to check their card balance or fare expiry in this way.

(Some apps claim to do this with Myki, but what they’re really doing is checking your online account, which is not necessarily up to date — the card is the point of truth.) 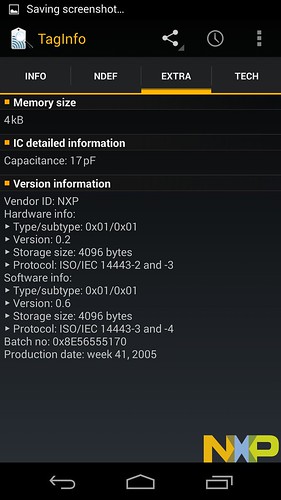 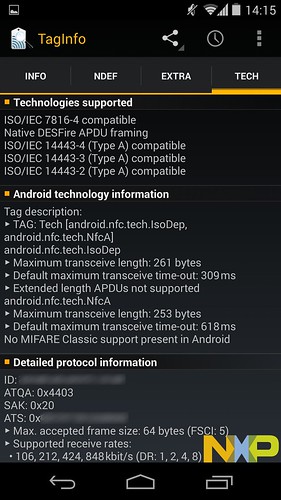 Oh, and here’s what I get from a Brisbane Go Card: 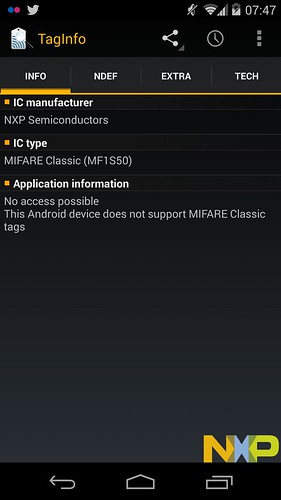 10 replies on “Some phones can read #Myki cards. Could you one day check your expiry/balance on a phone?”

Meh, I would prefer they get the read times down to what was promised first before adding functionality. Touch on/off still takes way to long

Amazing! Can your phone (or its app) tell if you have correctly touched on? Or if your accompanying child has touched on correctly while you are sitting inside the train? That would be good.

@Hazchemd, yep, agree with you there. Priorities.

@Roger, theoretically the data is there to indicate touch status, but as with the other information stored on the card (balance, current fare expiry, recent travel history) it’s all encrypted and can’t currently be seen unless PTV decides to release software (an app) to do it.

Wow, I live in San francisco and had no idea there was an app to read clipper cards on your phone! The Farebot App shows not just the current balane, but also all my touches in the last 6 months, as well as top ups for the last 6 months. Great stuff, pity I can’t also use it to top up my card, the online topup system provided by Clipper (the Myki equivalent) takes “up to 2 weeks” to come through…

And of course, if the phone can read the myki card, it can be used to replace your Myki card. PTV could come out with an App to replace the Myki card and just tap on with the phone.

I actually managed to compare log files and the touch on and off is actually unencrypted so yes, you can determine whether it is touched on or off.

Everything else – couldn’t get anywhere.

@Geoff – I don’t think you can presume that is the case. An RFID reader isn’t an RFID chip.

Interesting, and cool technology; unfortunately I can’t see your wishes in this regard coming true Daniel. Also as stated above, there are bigger myki priorities.

For the first time ever, I have suddenly gotten interested in buying a smart phone.

As usual, because I tend to get my info from the Toxic Custard email, I’m buying in a bit late. When I discovered that my NFC enabled phone could (without any special app) sense my Adelaide Metro Card, I did a bit of research on NFC in general (i.e. looked it up on Wiki) and discovered, as you must have, that lots of “transport” cards use variations of the technology. (IIRC, in Oz, Brisbane, Sydney, Melbourne, Adelaide and Perth all use a form of it.) So I wondered whether an “envelope” type app could be produced which could take “plugins” for each area. Then, the app could turn your phone into a Myki or Metro or Smartrider, etc. Turns out studies have been done on apps for a single card, e.g. Transport for London – reported in “NFC in Public Transport” – NFC Forum, Inc. 401 Edgewater Place, Suite 600 Wakefield, MA, USA 01880, with quite positive results (“Oyster – The trial handsets were all enabled with Oyster functionality, which allowed each participant to use the handset in place of an ‘adult’ Oyster card – to load ‘pay as you go’ value and weekly or monthly period tickets, and pay for travel on the Tube, buses and trams across the city. Each trial participant was given £50 in free credit … Key findings of the research were that customers maintained high levels of interest and satisfaction throughout the trial and that the main customer benefits were convenience, ease of use, and status.”). So you never know. Maybe, in the not too distant future, our phones will remove the necessity for us to carry *any* of these cards – Visa (payWave), MC (paypass), etc, included.

The technology allows for different read and write keys. Why they set them the same in some cases I have no idea. I guess if they made it more open, they wouldn’t be able to flog as many proprietary devices (Eg. Dedicated balance check terminals).