Well, here we are. Some more thoughts on the Doctor Who anniversary… Warning — below are spoilers for those who have not seen the special episode yet 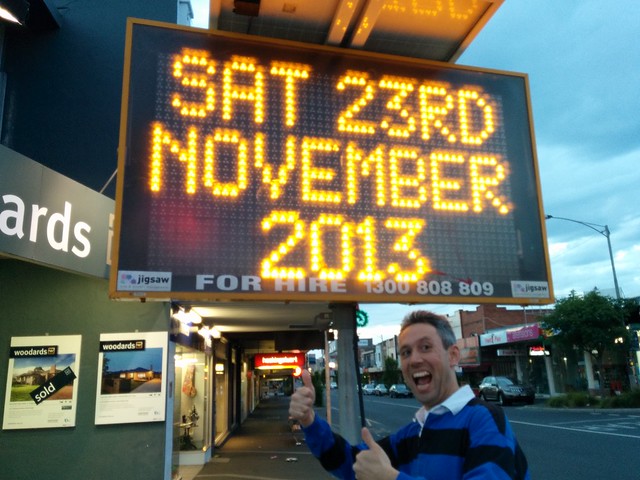 The Doctor Who 50th anniversary special episode “Day Of The Doctor” aired in the UK at 7:50pm GMT Saturday night which is 6:50am AEDT on Sunday morning. Thankfully the technology for the simulcast is a little more sophisticated than streaming video — otherwise we might have seen this!

It made me wonder… the ABC self-regulates its programme ratings, and rated the episode as PG, which is a safe bet.

But with the same episode showing at numerous Australian cinemas today, and them advertising it also as PG, does this mean it had already seen by people at the Classification Board?

The answer seems to be yes — there is a listing on their web site showing it was rated PG for mild impact themes and violence on 7th November… which I suppose means copies have gone to all the broadcasters as well.

Full points to ABC2. The geniuses in their programming department managed to get their weekday Doctor Who repeats to conclude on Friday with the episode before the special. Well done!

BBC Worldwide (their marketing arm) are running Popup Shops around the country too. We went along to the Richmond one the other week (it may have finished up already), and it was very busy. 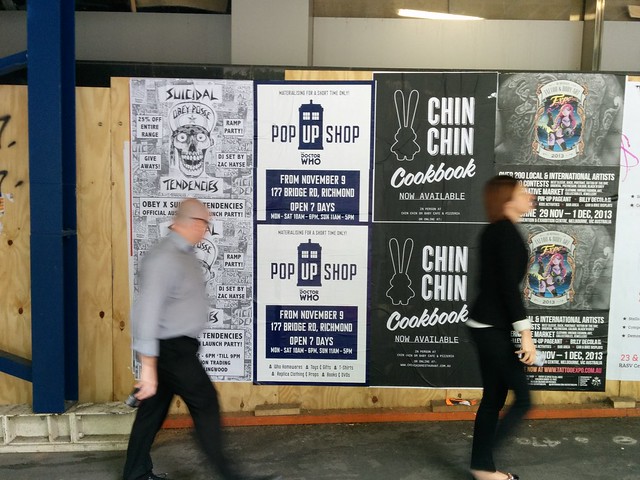 And the special episode itself? Well I got up to watch it, and will watch it again tonight.

Fantastic. A great balance between nostalgia/tribute and a fresh story that wouldn’t put off the Newvians (as Isaac has called new Whovians).

Nostalgia is a powerful force. The episode managed to tug at the collective memories of decades of episodes via millions of viewers.

At the start it referenced the very first episode (which I’m too young to have seen on original transmission, but first saw in the mid-80s on a very fuzzy copy of a copy of a VHS tape), but there were also many more recent memories — including some from the 70s and 80s — I’m sure I wasn’t the only one who found myself delighted but also a little emotional while watching.

The Zygons — happily little changed since their 70s appearance.

The Curator — what a surprise.

From the mini-episode Night Of The Doctor we now know 8th Doctor Paul McGann regenerates into John Hurt. It’s implied in this episode that he becomes Christopher Eccleston. But what happens to the numbering now? Is Matt Smith actually 12 instead of 11? If so, is Peter Capaldi (glimpsed briefly today) set to be the 13? If so, what happened to The Valeyard, who was supposedly going to be between the 12th and 13th?

Or did McGann to Hurt institute a reboot, given he was actually brought back to life by the Sisters of Karn? That would make Hurt the 1st, and so on. It seems not, if the credits were anything to judge.

The 13th is meant to be the last Doctor. Not that it really matters — if the makers of the programme want to bend Timelord lore and go beyond the 13th, they’ll find a way — it’s science fiction, after all. (They did it years ago with The Master.)

A loose end was tied up — in The Shakespeare Code, we saw the Tennant Doctor being chased by Queen Elizabeth the First. Now it seems we know why.

Though we never saw what happened to the negotiations between the two Kate Lethbridge-Stewarts. And why is Clara now a school teacher? (Or did we already know that?)

This episode turns around the result of the Time War. But would the Daleks really have destroyed themselves when Gallifrey disappeared? Seems a tad unlikely, though maybe that’s why the Eccleston Doctor is so surprised any of them survived.

Maybe some of these things will be explained later. But I for one thoroughly enjoyed this episode.

And like all good stories, it ended with a cup of tea.

Here’s to the next fifty years!

In Britain it was second-highest programme of the night, watched by 10.6 million. (Source)

Surely everyone’s seen this, but just in case not, here’s a link to its permanent home: the Doctor Who Google Doodle, including a multi-level game inside it. Over a few tries, I eventually managed to complete it in 3 minutes 28 seconds.