Regular passengers using Flinders Street Station will have noticed that while the platforms are numbered from 1 to 14, there’s no platform 11.

It’s not a Harry Potter scenario with a hidden platform. There used to be a platform 11, the twin of 10, facing the river, and commonly used by St Kilda and Port Melbourne trains until 1987 when they were converted to tram lines. But its track was removed — I assume when the pedestrian subway was extended to the river to meet the pedestrian bridge to Southgate, which opened in 1992. 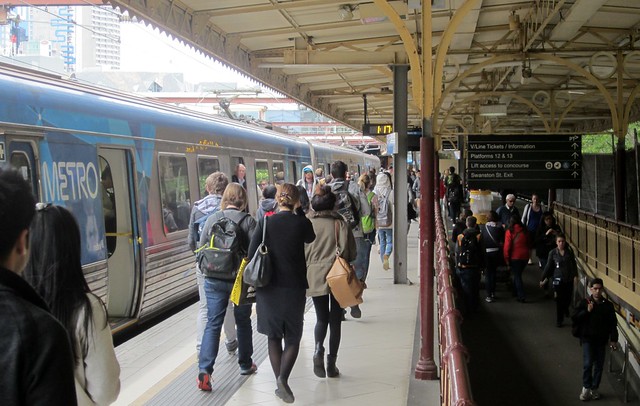 Today, trains to Newport (Werribee and Williamstown and Altona Loop/Laverton, to be precise) depart from platform 10 on weekdays.

Problem with this is that one platform isn’t enough during peak hours, and the trains depart from either 10, 12, 9 or 8, which are mostly quite some distance apart. Passengers tell stories of rushing from one to the other in chaos. If only there were another platform adjacent platform 10…

So could they re-instate 11? It would require some changes to the river-side subway entrance, part of which is where the track would be, but most of the rest of the old track alignment appears to be intact. 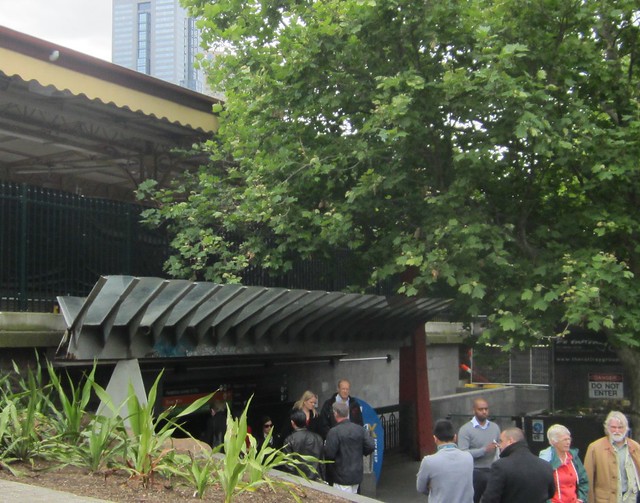 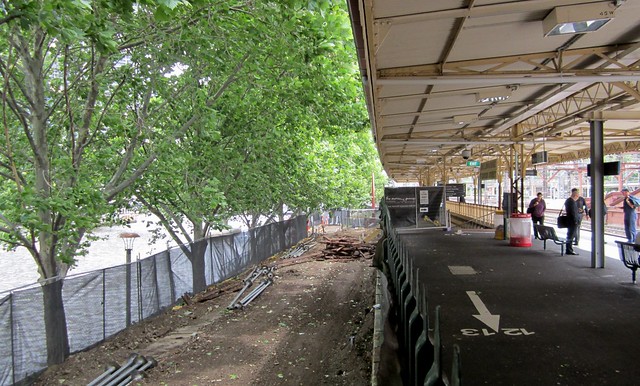 But don’t all trains to Newport come through from the east?

Mostly, but not all, at least not during peak hour — a quick skim through the Working Timetable found the the 17:11 and 17:55 Flinders Street to Werribee services both come from Werribee (each followed by a Laverton service a few minutes later from platform 12 or 8/9), and this might increase when Regional Rail Link starts to allow yet more Newport trains. Any trains terminating from the west could easily run into 11 and reverse.

Even so, some trains from the east heading west would be able to run via 13 through to 11, if an effort was made to put Sandringham trains on 12 (which indeed would have more capacity for them if not used by any Newport trains).

Imagine that, Newport train users — all your peak hour trains from adjacent platforms 10 and 11! That would make life a lot easier for peak-hour passengers.

Alas, it seems someone has decided to build a bar or a cafe or something on the site instead. 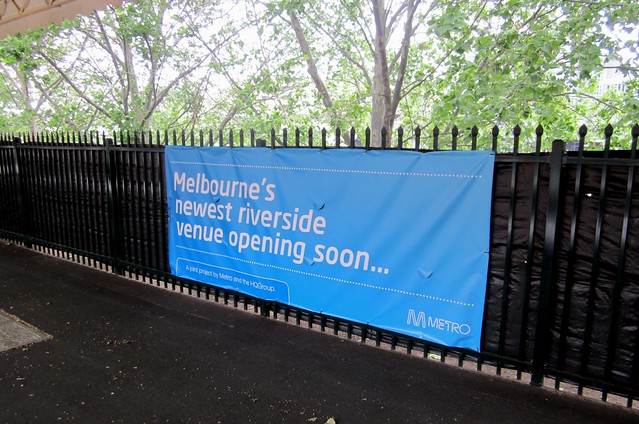 Flinders Street used to have platforms 15 and 16, part of the old Princes Bridge station for Clifton Hill trains, now replaced by Federation Square. But of course that didn’t cause a gap in the numbering.

Box Hill has no platform 1. There’s a placeholder that was used during works, then put aside for future use when the station was moved underground in the 1980s.

Any other stations that are missing platforms?

My local station, Brighton Beach, has a missing Platform 1.
Actually, it’s used for maintenance and as a siding, but there is no public access.
PS I loved the old Princess Bridge station. It was a quick way of accessing Flinders St station walking from the east side of Flinders St.

With even the most pessimistic figures showing a doubling of heavy rail patronage within a generation, something dramatic has to be done to extinguish short term thinking which removes flexibility in the system. Hopelessly under resourced VicTrack still seem to be operating on a brief to sell off or otherwise commercialise everything they can, even when their main operator tenants see them as a bad landlord and their small commercial tenants as the landlord from hell. And the fetish with disrupting pedestrian flow through slow barriers to entry is going to look even more stupid when the majority start paying their fares via a mobile app on a device which never has to leave their pocket or bag. Elizabeth Street subway and lack of direct access from Fed Square to/via platforms 12-15 are monuments to madness, or maybe symptomatic of the latent desire in a corner of, especially political, Australia to return to the mythical ‘fifties.

Two of the first things I would do include,

++ Rebuild the track along #11, to make one long platform with the other one (forget the number, but it aint #10). To enable 12 car trains to pull into this, from locations such as Dandenong or Ringwood.

Platform #10, would be the second of the two 12 car platforms.

Only two items of capital are required to permit 12 car trains to run express between Dandenong and Flinders Street, that being one longer platform at Dandenong, and ofcourse #11 at Flinders Street.

One of my passionate wishes is to see this ‘dandy dozen mix express project happen. Even better it would be to extend services to North Melbourne, say a new 12 car long, platform #7.

++ Reopen #15 and #16, so we can have more trains on the Clifton Hill line, and who knows, may be able to use that to terminate a Lilydale train or two on.

++ Relocate the information center at Federation Square (currently located on where #15 and #16 are) to somewhere.

++ Remove a portion of support under the square, so I can relink the Northern loop porthole to platform #6. This means that, you can redirect those trains to another platform whenever that is needed.

You could combine the last two points into the one project.

The design brief for the Flinders Street Station design competition foreshadowed the eventual reinstatement of Platform 11 (along with an additional double-track viaduct to Southern Cross Station just south of the existing one). So I guess this structure is going to be of a temporary nature.

Wynyard and St Leonards Stations in Sydney are both missing a platform 1. Wynyard used to have one for a never built Northern Beaches train line, while St Leonards has 2 spare platforms for an eventual second Harbour crossing. Here’s a piece I wrote about them recently:

Alan, I believe it to be true.

While i have not personally seen it, I know of trusted persons of whom have certainly talked about it.

Pitty they could not do that again now.

“But of course their didn’t cause a gap”?

Something else Paul was arguing for years ago…

@Jim – How difficult is it to couple and decouple trains? I don’t imagine its something you want to do in the middle of peak hour on a service that is running.

@Michael – The entire Flinders Street redesign project was nothing more than an expensive PR exercise. There was no budgets set for the project, nor any funding or timeframes for their implementation. In short, the design project never meant anything was going to be done about the shoddy condition of the station.

RE, decoupling of trains.

With the modern MultiFunction couplers, it takes one person, less than one minute to couple and to uncouple such trains.

It should be as simple as having one train come in, draw up to the front, then the second one comes in behind, stops lets people off, closes the doors, moves ahead that little bit to couple onto the front portion, and then the train can be off.

There is only one location where this would happen, that being at Dandenong, or at Ringwood if you did that area as well. In both locations, you would have one platform built just for this purpose.

As for at Flinders Street, the train would just turn around and do the reverse journey, or will stable at say North Melbourne, where it will be held there between peaks.

Furthermore, given the fact that the Dandenong line ‘is at capacity’ in peak periods, the only solution is to provide longer trains on the line. This is one very simple solution, and is very cheap to put into practice too.

Julian, point taken. But the fact that entrants were asked to assume Platform 11 would be reinstated strongly implies that the Department wants it to happen some day.

It would really be easier to run the 12 car train from Pakenham and have a connecting shuttle service from Cranbourne.

Perhaps the need for a new cafe is more urgent than another platform? Maybe the cafes in Degraves St, Fed Square and Southbank can’t cope? And of course some of the pressure on Flinders St will be relieved when the Melb Metro line is opened, which as we all know is imminent!

“Any other stations that are missing platforms?”

Yeah I suppose Southern Cross Station is missing platforms. The land that could have been used to build platforms for HSR is now occupied by an AFL Stadium and a hotel.

For around a year Perth station had a platform 11 without a platform 8, 9 or 10… but we’re just about done with it now that the construction work plauging the station for the past 3 years is almost finished. I think you can have it back now… ;)