Over the years I’ve tried to avoid being sucked into buying the latest and greatest technology just for the sake of it.

But I must admit being keen to check out the new Android 4.4 (Kit Kat) and Google Nexus 5 phone.

What would I need a new phone for? I could put Kit Kat on my old phone! 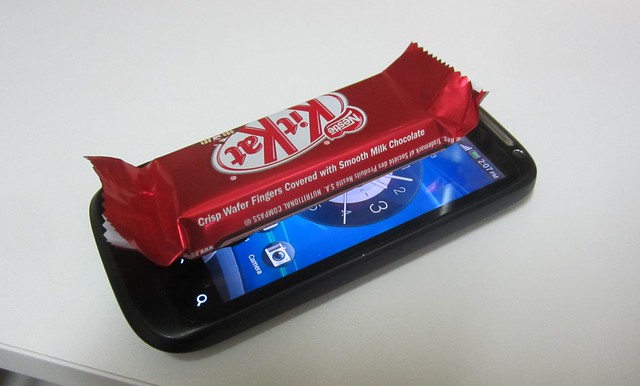 Seriously though, I’d upgraded my old HTC Desire S to Android 4.0, and while it works, it’s noticeably slower. I was thinking I’d downgrade it back to 2.3 (the ROMs for HTC phones, for both 2.3 and 4.0 are available here), but given I’ve had it a couple of years, what about a new phone?

Having seen Tony’s Nexus 4, over the past few weeks I found myself salivating for the about-to-be-released Nexus 5. It was finally officially announced and released on the 1st of November.

I was pondering this when my tax return came back, and would easily cover buying one. The Nexus 5 is cheap for a flagship phone — much cheaper than an iPhone. The 16 Gb model is A$399, the 32 Gb is A$449. You can’t upgrade the storage in it via an SD card, so choose wisely. Obviously a lot of people went for the 32 Gb, as it sold out quickly on the first day.

Fortunately a bloke I know accidentally bought two 32 Gb models in black — my preferred colour — he’d been desperately clicking through trying to make sure he got one before it sold out, and wasn’t sure his order had been accepted, so kept clicking.

On last Wednesday I met him at Southern Cross Station to exchange cash for a box with the phone in it, like an extremely geeky version of a drug deal.

I’m not going to bother doing a comprehensive review of the phone — that’s better handled by the professionals. But here’s a few notes on it, which I’ll keep expanding as I go. 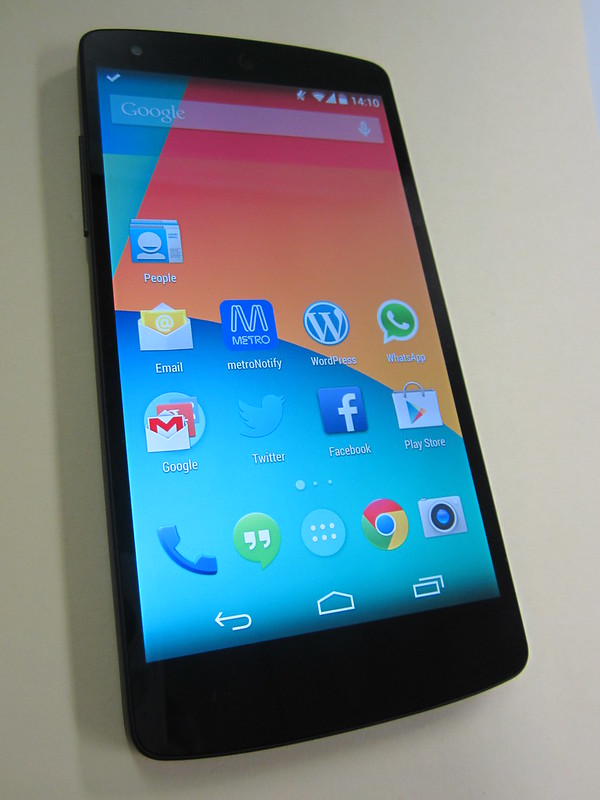 It’s a bit bigger than the Desire S. Wonder if it’ll fit in my front jeans pocket, which is where I tend to put my phone if I’m sitting down and have no other pocket.

The on/off button is on the right hand side, rather than the top as I’m used to, but I’ll adjust. Oddly it feels just a teensy bit loose. Hopefully that won’t be a problem in the future.

I’m thinking I might get a case, or at least a bumper, for it. It looks sturdy enough, but some protection might be good.

The old phone had a mini-SIM. The Nexus 5 takes a micro-SIM. I sidled into a Telstra shop to get it sorted out, and they used a cutting tool to chop it down. Low-tech, but effective.

Android to Android is pretty easy, because all the contacts and so on are kept “in the cloud” as part of your Google Account.

Text messages, pictures etc weren’t brought across. I copied all the pictures and voice recordings manually off the old phone for archiving on my PC at home.

Text messages were easily saved off the old phone using the freeware SMS Backup & Restore. It saves all the messages into an XML document, making it human-readable if I don’t want to import them into the new phone… which I don’t, especially.

Once the new phone was running, it was easy to go into the Play Store and re-install wanted apps onto it. So far I haven’t seen anything I had on the old phone that was labelled as incompatible with the new one, though I haven’t re-installed absolutely everything — I’m being a little more discerning.

Camera quality in general looks good, though the old phone was able to adjust the white balance (and focus) to a particular object by touching the screen while lining up the shot. This doesn’t appear to have that feature, making some photos more difficult than in the past.

Micro-USB connection — excellent, compatible with my previous phone, so I have plenty of cables.

As with all Android phones, I love the way you can just copy stuff to and from it — not tied to pushing things through iTunes.

Any new phone will take some getting used to. This is good, but it’s not perfect…

The iPad and my old phone both had an easy way to grab a screen capture. Does Kit Kat not have this?
— People keep telling me to hold down Power and Volume Down… this doesn’t do anything for me. What am I doing wrong?
— 12/11/2013: Okay, figured it out. Unlike with my old phone, you have to press Power and Volume Down simultaneously, not one then the other.

Despite a front-facing camera, it has no mirror app?

Text messages are rolled into an app which also handles Google Hangouts. Neato — I guess they’re taking on iMessage. But why when writing a text message, does it not give me a character count, so I know how much I can write without going over 160 characters and paying extra?

Good overview, I agree with your points. As for taking a screenshot, Power button + Volume down button works on my N5.

You should be able to take a screen shot by holding the volume down and on/off buttons together. That works on the Galaxy Nexus.

One of the nice things about Android is that there are replacement apps for practically everything. Check out Textra – a much better texting app than the stock one (and has, amongst other things, character counts)

When I saw an electronic billboard advert for Google Nexus flash by at the train station, I thought it read “George Negus”, until the ad flashed past again.
As for “when my tax return came back, and would easily cover buying one”, my tax return went towards paying for one of my kid’s wisdom teeth removal. Sadly no money left for toys!

on my old samsung galaxy s2, to take a screen shot you hold the home button and the power button at the same time.

Finally sorted out the screen shot. It is Power/Volume Down, but you have to press them at the same time, not one then the other like on the old phone.

I don’t have a smart phone, but that phone number mismatch thing is annoying. I have the same problem with my GSM phone.