Today Metro shuts down its SMS Alerts service. It has been running since September 2001, when it was introduced (the day before 9/11), initially for Connex Connector Plus (Connex-only yearly ticketholders) — and back when Connex only covered half the rail network, of course. It spread to all customers and all lines later, along with timetable enquiries via SMS as well.

Metro later inherited the service, but by that point the alerts were costing them tens of thousands of dollars a month in fees.

When I surveyed the timeliness of SMS alerts in 2011, I found most were received early or on time. 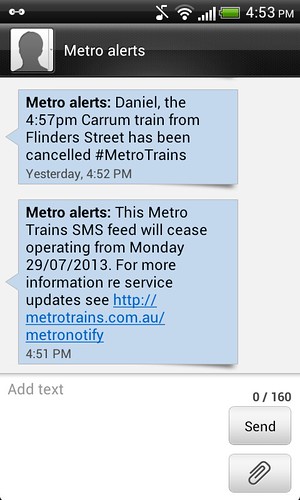 But with the cost, it was hardly surprising Metro would be looking for alternatives. This year they’ve brought in the app for iOS and Android, and stepped-up on their Twitter and web updates as well. These avenues now all provide very high quality information. The only thing they lack compared to SMS alerts is that (apart from the app) they don’t push the information to you (the app does, though there are some issues with it), and the times aren’t personalised to your station, as the SMSs were.

Eventually it’s hoped there will be train and bus equivalents to Tram Tracker… this has been promised some time ago. No ETA yet. (Perhaps we need a Train/Bus Tracker Tracker?)

SEPTEMBER 6th 2001: CONNEX SENDS A MESSAGE TO ITS CUSTOMERS

Recognising the value of customers’ time was the driving force behind the introduction of a unique and exciting new service announced today by Connex Melbourne.

A first for rail transport in Australia, the tailored SMS messaging service to be introduced on September 10, harnesses the latest in communications technology to bring new convenience to Connex ‘Connector Plus’ customers.

The Connector Plus program was introduced by Connex late last year to recognise and reward customers who make long-term commitment to use regular Connex services.

Connex General Manager Marketing, Felicia Mariani, said the introduction of the new SMS service and its innovative technology follows extensive consumer research over the past year.

“Findings show customers realise with a passenger services of our size, things can happen that affect schedules – that’s part of the nature of our business. What customers do expect, however, is to be made aware of these situations in time to adjust their own schedules,” Ms Mariani said.

“We wanted to develop a product that could bridge the current communications gap with customers. The new messaging service will communicate directly with our Connector Plus customers, notifying them if their regular train services in the morning and evening peak are delayed by longer than 15 minutes or cancelled for any reason. The messages are customised to the station and times of travel nominated by the customers. In this way they only receive information relevant to their own personal travel patterns.

“One of the unique features of the messaging service, which further add to customer convenience, is the independence from any particular telecommunications company, giving access to customers regardless of their mobile phone carrier.

“This initiative has been a collaborative effort between Connex and a number of key partners. Connex appointed e-move australia to facilitate development of a unique program that would be tailored to the specific requirements of the rail industry. e-move then worked with our interactive partner, Leo Burnett Digital, which developed the strategic solution and along with its wireless partner, Platypus, designed the web-based application and database to drive the program.

“The coming together of these partners provided Connex with a one-off tailored solution that responded to specific needs of our customers more thoroughly than existing ‘off-the-shelf’ products.

“Connex will continue to explore innovation and technology to improve the reliability and convenience of our services,” concluded Ms Mariani.

I think the main problem with establishing a bus tracker is that most bus companies don’t know where their buses are at any time (apart from the Smart Bus routes). Is there a process underway to fit all of the buses with tracking?

Why can’t they create a integrated Metro Notify/tram tracker and PTV app for Android? The “Metlink” app for Android is ancient with a horrid app layout and clumsy interface – basically the same as the Nokia S60 Symbian app that was launched years ago. I asked PTV if they were porting the IOS version, and they said they were, but that was over a YEAR ago.
I now use Offi and Train Trapper.

I find the MetroNotify app is next to useless. Sure it might tell me if there is a significant disruption and all services are backed up on my line, but its never once notified me that a single service has been cancelled or has been significantly delayed. Next, there is no way to set an individual station, nor timeframe for regular push updates. Finally it doesn’t contain any method for checking the timetables themselves. At the very least a “Next 5 Departures” function would be easy to implement and extremely useful.

Whilst I’m on a similar topic, its now been just under a year since the Victorian Government announced the DataVic Access Policy. Why is public transport timetable data, something that is already publicly available, and simple to format shift still under an Intellectual Property lock and key? Google Transit works better than journey planner, and is already integrated with most smartphones, it’s about time it was rolled out across Victoria.

@ John – I agree wholeheartedly! It’s barely functions at the best of times and outright ceases functioning at other times. Android now has a higher market share than iOS. Time to get with the program PTV.

@Philip, part of the puzzle of bus tracker has been provided via Myki – GPS so buses know where they are, and logging systems so they know which route/service they are running. It remains to be seen when this information will be used for tracking, let alone publicly. This should also assist monitoring punctuality/reliability performance – currently this is done only on a tiny percentage of bus services.

@Julian, that’s odd, I get notifications of individual cancellations all the time from MetroNotify. Train Trapper is also quite good, but certainly doesn’t push alerts – and it’s all crowd-sourced of course.

Dammitt, I will have to get a smart phone now.

With “GPS”, “buses know where they are”, but that isn’t much good for a tracking system. Contrary to popular belief, the GPS system doesn’t track anything. You need some other facility to do that. One way, is for the little black box on the bus to send an SMS message to their HQ every 30 or 60 seconds. Expensive , if the bus company isn’t getting a big discount on SMS messages.

@enno – A quick glance at a few bulk SMS services shows prices as low as 4.9 cents per SMS. One a minute would work out to be about $2.94 an hour per bus. The award rate for drivers is about $21p/h, not including penalty rates for weekends, holidays, etc. So the pricing is fairly expensive, but not massively so.

However, why rely on SMS? Why not just connect to the internet via the mobile network and transmit the data via that. The packets are minuscule, less than a kb per transmission, because the packets are minuscule there is not even the need to connect via a 3g or 4g networks, a simple 2g data network would suffice. Dodo offers a 1Gb data plan for $20 per month and that is for individuals. I’m sure Telstra would offer very similar rates for government (which, despite privatisation, would include bus operators).

Well that’s useful to know. But if they are so cheap, why are they complaining about sending out the train cancellation messages , then ?

I want the tracking info to show how many metres away the Bus/Tram is, not estimated minutes.

They should give us the option to select minutes or metres.