An article in The Age today notes that while there were a few issues, last weekend’s inaugural PAX Australia video game festival went well. 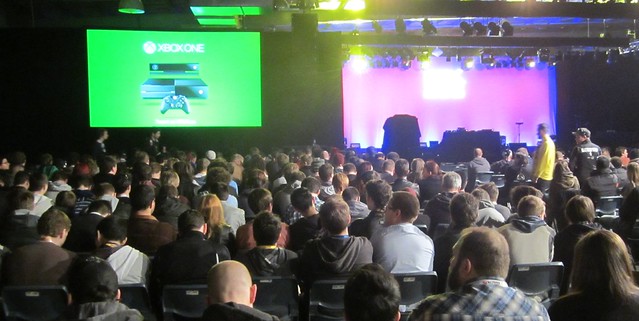 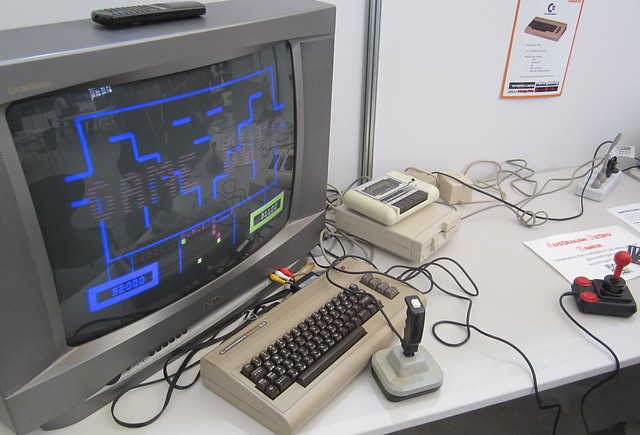 We went along on the Sunday, and had a good time. We avoided the sessions with long queues, and instead saw an XBox launch event, played some games in the retro area, had some lunch, and looked around the expo hall.

Not being hardcore gamers, that satisfied us. And that’s I think where the planning for this event slipped-up.

Someone had obviously decided that most people would be staying all day, and the transport planning clearly reflected that.

The trains to the Showgrounds only ran every 20 minutes until 10:40am… then at an appalling 40 minute frequency until midday. 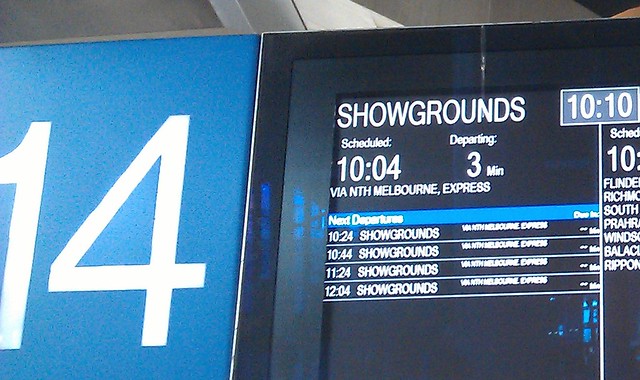 Worse, we and others found there were train delays. The 10:04 was about 10 minutes late, meaning we spent 25 minutes waiting in the cold at Southern Cross. It then crawled to North Melbourne before finally getting up a decent speed the rest of the way to the Showgrounds. The 12:04 train was 20 minutes late.

At Showgrounds station there were long queues for the few Myki validators available. (We didn’t bother to queue — it barely matters on weekends when the fare cap is $3.50 anyway, and even on a concession fare, two 2-hour fares will get you to that cap.)

After 12:04 (well, 12:24 if that service was 20 minutes late) there were no trains at all until the late-afternoon. Instead people were advised to catch a tram back, with extra trams running.

The reality was that lots of people didn’t stay all day… while many may have come first thing in the morning and stayed until everything finished up, many others arrived and departed at various times across the day.

And what few extra trams ran were sporadic, resulting in the utterly predictable problem of the regular route 57 short (Z-class) trams being packed: 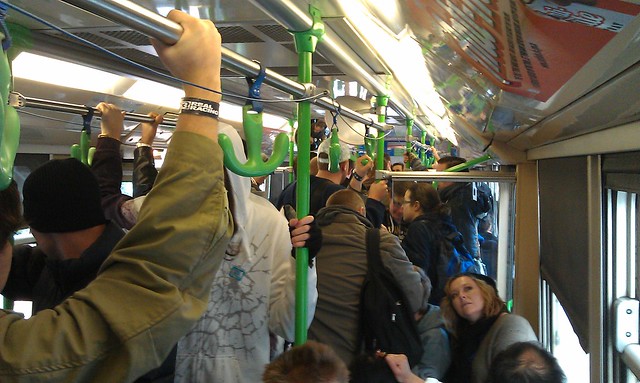 Apart from making many people who’d arrived by train find a different exit and stop to get home again, it was a slow crowded ride back into the city. Thoroughly unimpressive.

The PAX programme booklet noted the support of the Victorian Government, and I happened upon an episode of Byte Into It on Triple R last Wednesday which noted that PAX came to Australia because of enthusiasm from the locals — and to Melbourne specifically by that government support. Which is great.

But this kind of cooperation should include adequate transport arrangements. Public transport can and should do special events like this very well, but on this occasion, the system let people down. The danger is that next time more people will drive, clogging up streets around the venue. And given that special events are sometimes the only times people use PT, they may also be put off using it for other travel in the future.

How much extra would it have cost to run 20 minute trains all day? Surely not much more than the extra trams they ran all day, given the labour costs (drivers, and signalling people for trains) are the main cost.

If PAX returns to Melbourne, and I hope it does, if it’s at the Showgrounds again, they clearly need to do better.

10 replies on “PAX Australia – overall a success, but the public transport arrangements let it down”

At least (I assume?) they weren’t all in weird cosplay costumes taking up even more room on the trams and trains (ever been to a SupaNova etc at the Showgrounds?)!

Are the tram stops at the showgrounds wheelchair accessible, and were the trams? I may have been interested in going to PAX but I would not have wanted to stay all day. By the sound of it I may not have had a choice.

@Chris, very good point. Neither of the Showgrounds tram stops are accessible. And the regular trams on that route have high floors. The extra trams that I saw running that day were low-floor, so you’d need to be able to get up one step (from ground level) to use them.

I heard mention elsewhere that there were quite a number of people in wheelchairs who attended the event. Extra trams are a waste of money. The normal service would pick up a few extra people along the route. Trains are what people want for such events, fast and reliable and given it is a short distance from the city station, they should easily be so.

Theoretically the low floor trams do have accessible mobile ramps installed on the side of the 2 central doors in the middle of the low floor trams, however I am unsure if the tram drivers know how to operate them. But the aim is to get all tram stops DDA compliant by 2020, unless the policy has changed.

I just don’t understand how having even one train shuttling back and forth would cost much, even if it only went to North Melbourne and Southern Cross which is enough to get people back onto the “real” train network.

@Aljosa, I do not have much experience using trams but it is my understanding that the ramp can be extended by pressing a button next to the tram door and it is designed to work in conjunction with an accessible stop to allow level boarding. Although the ramp may be helpful where there is no accessible stop, the ramp would be steeper than is legal if it had to extend all the way to ground and I would not be able to get up it an my own, but I could with assistance. It may also be the case that the ramp doesn’t extended out far enough to reach the ground in such a situation, as I have seen with some Melbourne buses. Also if I am sitting at ground level I may not be able to reach the button to extend the ramp in the first place.

It will be good to see all stops become compliant but apparently we are not even half way to the stated target of 55% of stops by 2012. See http://www.theage.com.au/victoria/new-trams-arrive-but-not-on-schedule-20130701-2p71e.html

@Chris, @Aljosa, the buttons merely flag a request to the driver to deploy the ramp.

My understanding is the ramps are not in use except for emergency situations such as where they might have to empty the tram (where there is no platform available).

Having ramps deployed regularly would certainly slow down operations… I think they’re right instead to roll out level boarding at stops.

Thanks for the info Daniel. You are correct that having to deploy ramps would slow down operations. It is far better to achieve level boarding with just stoops and trams if possible. I should go for a ride in a tram again soon and see what they are like. I have not done so since 2006.

Hey, I was visiting from Perth, and was unfamiliar with the public transport system prior to arrival. I was shocked at how little wheel-chair friendly transport there was. This resulted in a lot of taxis (which were very $$$). On the Friday, we waiting for 2 1/2 hours in the rain for a taxi that would take my wheelchair. Only on the Sunday were we able to get a train from the Showgrounds (which by the way, had a huge gap between the train and the platform which I needed to be lifted over), the rest of the time I had to taxi. I was not impressed at all.