I was amused when I posted last week about using credit card points to perhaps buy an iPad Mini, the Apple-haters jumped in.

The post wasn’t really about technology; it was about credit card points! 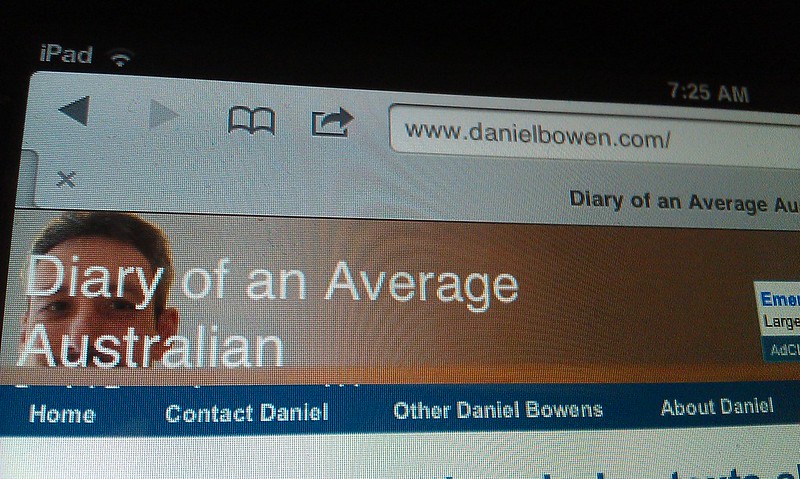 The choice of an iPad over an Android tablet was deliberate. Yeah yeah, I’ve fallen for Apple’s marketing hype.

Nah… After pondering buying an Android tablet, I decided that we should aim for some digital diversity in my house.

Thus, we have Android and Nokia phones, Windows and Mac computers (the latter running OSX, but also Windows via both Boot Camp and Parallels), and Jeremy’s dabbling with Linux via his Raspberry Pi.

I bought the iPad Mini yesterday, so now we also have iOS. We don’t have everything, but we have a pretty good spread.

First impressions? The usual nice Apple design and build quality. The interface is pretty easy to use, as was the initial setup.

It’s very responsive with operations like scrolling through web pages or lists of tweets — but noticeably one exception: clicking on buttons seems less responsive than the other touch-screen I’m familiar with, my two-year-old HTC Desire S mobile.

Typing isn’t too bad, but once again isn’t as nice as on the phone, with its force feedback.

The camera seems quite good, though you look like a dork taking photos with it.

Overall, enjoying it so far — and it’s nice to be able to use apps not available on Android.

Are there still sites you can sign up for that simulate cross browser testing? I have worked at once place that had a Mac (very old) just for testing/converting videos. If the company is big enough it might be worth having different computers for testing plus the designers would mainly use Macs any way.

@Tim You can use http://www.browserstack.com/. It currently doesn’t have the ipad mini though, but does have the other iPads and iPhones

I use an Android phone and an iPad. I had a brief foray into Android tablets, but found that the software experience just wasn’t as nice as on the iPad. Also wasn’t a fan of the aspect ratio – 4:3 is much better for for web browsing on a tablet IMO (I don’t watch many movies). Like you I think iPad + Android is the way to go. Having said that, the screen resolution of the iPad mini looks pretty terrible in the photo you’ve posted. Did you consider waiting for a retina version?

I’m curious if you tested the website on Safari on any other platforms or whether this was the first time you saw the site on any Safari browser? When I used to make sites fairly regularly I used to make sure I tested on as many browsers as I could, but I never went so far as to test the different browsers on different operating systems and devices.

@Mark, I wouldn’t pay too much attention to the picture quality above; it was snapped from the phone at close range. To the eye it looks much better.

@Julian, upon further examination, it’s a screen-size issue, not a browser issue. I usually use Chrome on the Mac, but under Safari the blog header looks fine — whereas on the phone using the default Android browser, it looks about the same as on the iPad Mini. I really need to get a proper mobile theme!

Which twitter client you using? I go on about tweetbot, but it really is the best, specially if u have multiple devices to use iCloud mute syncing.

@Nathan, I’ve started off with the Twitter app, but will try Tweetbot.

If you’re classing my post as the Apple hater, I should point out that my desktop machine’s a 27″ iMac, and my laptop’s a Macbook Pro. :)