Has anybody else had one of these, possibly dodgy, texts? 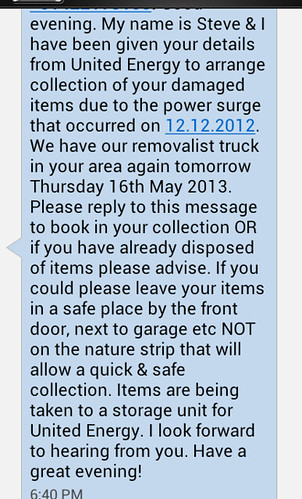 This is the second one I’ve received now. After the first I replied “Wrong number” and got a “Sorry” back, but the guy is persistent.

Something smells fishy. Note the supposed pick-up date, which is last Thursday, three days before the text was received.

When I mentioned it on Twitter last night, Marcus Wong noted that there was a power surge around that day (actually on the 11th if the 3AW article is accurate), on the Mornington Peninsula.

United Energy is a distributor, not a retailer — many people in Melbourne’s south-east are connected via them, even if another company is the one sending them the bills.

Of course, it could just be a wrong number plus poor record-keeping. The number of emails I get for someone, who apparently shares my name but has no idea of their own email address, is amazing.

3 replies on “Anybody else getting dodgy texts about a United Energy power surge?”

No, I’ve never received a dodgy text message from anyone about anything.
However energy companies phone me all the time.

Yes, it sounds suspicious. What reason would someone have to send you a bogus message (eg thrill of a hoax? spam advertising? break into your house when you’re out? steal your phone credit?)

I’d be sus too.
Like you, I get loads of emails for someone named Raelene, who has a similar email address or wishes they had my email address….. Some are quite personal too!