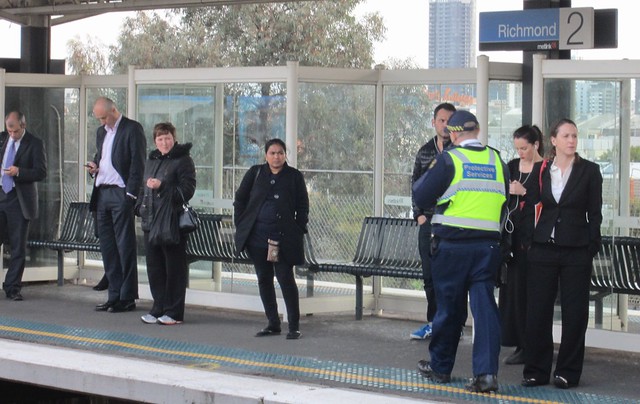 Our state government in the past has cited New York City zero-tolerance policies introduced by Rudolph Giuliani as inspiration for measures like Protective Service Officers, which will eventually see two armed guards on every metropolitan railway station after 6pm:

Mr Ryan said he was intent on establishing a Giuliani-style zero tolerance approach in Victoria, and rebuilding public confidence in community safety.

He wanted to knit together the various individual initiatives already undertaken, such as increased police numbers and more protective service officers and transit police patrolling trains and stations, into a “holistic policy for the community at large”.

Those who have read Freakonomics will know there is considerable doubt over whether zero-tolerance policies were actually the cause of the drop in crime in New York City.

This new article notes the problem with assuming zero-tolerance is the solution:

… it’s not just New York that has seen a big drop in crime. In city after city, violent crime peaked in the early ’90s and then began a steady and spectacular decline. Washington, DC, didn’t have either Giuliani or Bratton, but its violent crime rate has dropped 58 percent since its peak. Dallas’ has fallen 70 percent. Newark: 74 percent. Los Angeles: 78 percent.

…and it goes on to point out research has shown a very strong correlation, not just in the USA but across the world, between the removal of lead from petrol (known to inhibit brain development in children) and later drops in crime:

If childhood lead exposure really did produce criminal behavior in adults, you’d expect that in states where consumption of leaded gasoline declined slowly, crime would decline slowly too. Conversely, in states where it declined quickly, crime would decline quickly. And that’s exactly what she (graduate student researcher Jessica Wolpaw Reyes) found.

…
Nevin collected lead data and crime data for Australia and found a close match. Ditto for Canada. And Great Britain and Finland and France and Italy and New Zealand and West Germany. Every time, the two curves fit each other astonishingly well. When I spoke to Nevin about this, I asked him if he had ever found a country that didn’t fit the theory. “No,” he replied. “Not one.”

It goes on to speculate that a great way forward in crime prevention is to continue to clean up lead contamination from urban areas.

The government can probably argue that PSOs on all stations after 6pm is about improving perceptions of safety, and confidence for passengers. Given statistics have repeatedly shown little crime at most stations (and about half of that which does occur is before 6pm), it would have a harder time convincing me the PSO rollout is actually going to make us safer — particularly if the justification is reliant on shaky “zero tolerance” reasoning.

8 replies on “Joining the dots: Which leads to less crime – zero tolerance, or removing lead pollution?”

Very interesting. A good contibution to the debate, thanks.
It’s difficult to know the impact of any one policy or environmental factor. Too many things have occurred at the same time.
Safety is an emotive issue. The public still remember that 29 yo woman who was raped and murdered last year walking home.
As a middle aged man, I’m not scared to use PT or walk home from the station in the dark. But my wife won’t let our teenage daughters do this, unless in a group. This usually means DRIVING them around at night. Despite what the figures show on how safe PT is versus using a car.

Put it another way, perhaps logically zero tolerance could work, if potential criminals believe it means they’ll be caught and punished. Do they believe that?

I have serious doubts about the necessity of the two-PSOs-per-station policy. It’s a huge waste of resources.

The biggest driver for people to not fair evade on trains – for those who will take a free ride – is ticket checking.

Do we know how much is being spent on PSOs (ie cost per PSO).

Would it not make more sense to have station staff, who are cheaper and less (expensively) trained, can provide a service to travellers, can boost Myki usage through ticket verification on outer line stations, and can also provide assistance/deterrence in the event of drunken/violent behaviour (by calling police).

Speaking of lead poisoning, I suddenly felt unsafe using public transport when I realised our system was so unsafe it needed armed officer to patrol it.

The biggest problems with zero-tolerance are:

* Courts get dumped with extra work.

* Police and magistrates lose their discretion in imposing fines and sentences that take all factors of the crime and the perpetrator into account.

By all means keep public transport safe, but my life has never been endangered by feet on seats or fare evasion.

Cant the PSOs also act as ticket checkers by making sure everyone touches on?

Vandalism is a lot more prevalent at unstaffed stations, so having PSOs should prevent most of the vandalism too.

@Jacob , PSOs won’t stop vandalism (or any other anti-social behaviour) before 6pm.