Those who regularly head up the Hume Freeway from Melbourne would know about this, but others may not: it’s the Rooster Tree. 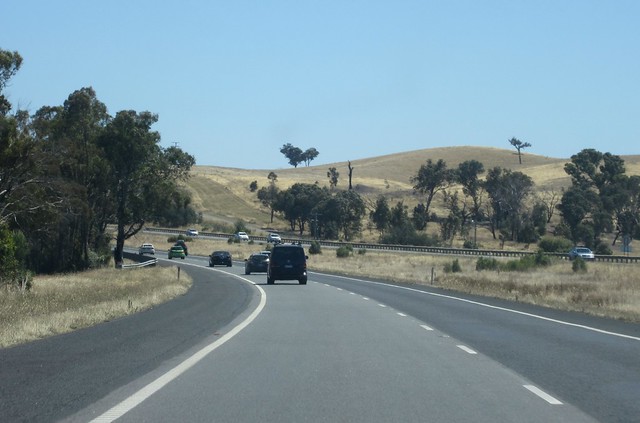 You’ll find it somewhere past Wandong and the exit for Clonbinane (which is one of those places I’ve never heard of apart from on the freeway exit signs), and it’s really only properly visible when heading northbound.

As you get closer, you’ll see it’s not really one tree, but a clump of trees.

One wonders if the owners of it know of its significance… my guess is yes, since it never seems to grow enough to look like anything other than a rooster.

Enough people know about the Rooster Tree that it’s got a fan page on Facebook — and in the aftermath of the horrific death and destruction of Black Saturday in 2009, many wondered if it had survived.

6 replies on “The Rooster Tree”

I’ve just driven from Melbourne to Sydney and back via the Hume.
I’m afraid that I missed the Rooster Tree altogether.
Reminds me of astronomers centuries ago who looked at a few stars in the sky and imagined scorpions, bulls and lions. Or is that analogy a bit unfair?

I’d never heard of it until my brother and his partner pointed it out to me a couple of years go – you can only see it on the way out of Melbourne, iirc. It may have also lost some definition as well, since in your image it looks more like a squirril … :)

I remember spotting it a few years ago, on my way to Canberra. It didn’t realise it was so popular

That’s one of my favourite landmarks on the Hume, except I call it Chicken Hill. I love that it has a song now!

Hah – you’re not going to believe this, but the very first thing I thought when I saw the photo was, ‘There’s a rooster shaped tree on the hill.’ Truly!

Hi Love the tree. We call it Chicken Tree Hill. Once we get past there the weather seems to get a bit better and a touch warmer. We travel to Yarrawonga all the time to the nice hot weather and to water ski, wakeboard, wake surf etc. Lovely place, nice hot weather !!