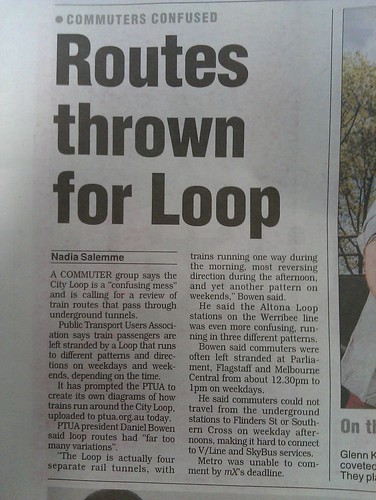 I’ll miss a lot of it, particularly dealing with the media, and meeting/discussing/debating with industry and political players (the former in particular often providing information that should be out in public, but isn’t.

(Over the years, I suspect, the media has been increasingly sympathetic as more and more journos, many of whom work in the CBD, have switched to using PT themselves.)

And I’ll definitely miss being able to help shape the debate – I’m thinking of the push towards frequent and better connected services, both ideas which are now generally agreed upon as needing fixing.

Without wishing to offend the good people in radio media, I can’t say I’ll miss the early morning radio calls, nor trying to juggle multiple things at once to do a live chat with Faine or Mitchell on the way to work (though I gotta say, live radio is a buzz — great for keeping you alert).

And while I’m always happy for a chat with people, those who just intently stare at me on the street… yeah, I won’t miss that so much.

What’s been fascinating is the shift away from the attitude that PT is only for the minority who can’t drive, plus CBD workers. It’s part of Melbourne’s transition to a big city, but organisations like PTUA have helped keep reminding governments that investment in better services has to keep up.

It will be critical for the new team to stay on message — to keep using the sort of language which the average punter sitting at home reading the paper or watching the news finds themselves agreeing with — whether they use PT or not themselves.

Thanks to those who got in touch (by whatever medium) when it was announced I was stepping down.

There were a lot of very nice tweets. If you’ll indulge me and let me stroke my own ego for a moment, here are some of my faves:

After nearly 10 years, @ptua president Daniel Bowen will stand down as head of the commuter group. More in @mxmelbourne. @danielbowen
— @mxmelbourne – 2:44 PM – 17 Sep 12
— for those not on the eastern seaboard, MX is the free afternoon commuter newspaper. Some deride their emphasis on showbiz news, but they do have a mix of wire stories and their small team of actual local reporters are good guys. PT passengers are their core demographic, and they’ve run many PTUA stories over the years.

Congratulations to @danielbowen. Stepping down after (almost) ten years as voice of the commuter. Many could learn from his approachability!
— @gboreham – 1:19 PM – 17 Sep 12
— Gareth Boreham is the former state political reporter for channel 10, including during the height of the trains crisis. Gareth’s comment on approachability is an important one for volunteer activist groups to remember. Mainstream media works to deadlines. For maximum effectiveness you need to understand and work within those deadlines, and foster good working relationships with the journos.

In the past couple of weeks before officially finishing up, I’ve managed to push out the door a couple of things that have been in the pipeline on and off for months, which I hope will be of interest:

An update to the study of 15 minute services, showing how few (buses in particular) meet the standard, and the huge gaps in Melbourne with no frequent PT, even in peak hour.

A new set of maps showing how the City Loop works, to try and highlight the silliness of so many confusing patterns.

Those of you who are PTUA members, hope to see you at the AGM tonight, and good luck to the incoming PTUA executive and committee team.

6 replies on “Tonight’s PTUA AGM means today is my last day as Prez.”

Once again Daniel. Thank you for your inspiring work pushing an important agenda. I hope you get some time to relax with a bit less PTUA pressure!

All PT users should be grateful for your many years of constructive and productive work developing sensible policy, disseminating useful information and lobbying government on inportant issues. Thank you!

Well done and congratulations, Daniel. I may be living on the other side of the world now, but every now and then I’d see you on the telly and think, “Oooh, I know that guy – it’s the blogger who started out as Toxic Custard!”

There are many ways to bring about change. You took a steady and persistent lobbying path. I don’t recall you ever calling a transport minister an effwit or a liar. You were always very reasonable and never personal. You stayed on the message and no doubt respective ministers, their minions, transport bosses and the media found you very pleasant to deal with. You worked within the system and effectively.

But I will say, sometimes I wish there was some passion and anger, an alternate lobby group perhaps. I suppose there was at times, but they burnt out.

As I said in the past, big shoes to fill for the newcomer, and I hope your replacement is not judged too quickly by the standards you have set but given time to find his or her own feet.

PS, I did not realise what a nightmare the city loop was until I saw the ‘helpful’ diagrams.

Daniel – congratulations on your nine years of service and your success in helping to broaden the agenda from purely infrastructure to service as well.

You should also be proud of how somewhere along the way you grew in the role to be seen as offering a distinctive, constructive and valid approach in a style different to (but no less effective) than pevious presidents.

Enjoy your return to private life and best wishes to your successor, Tony.

Congratulations on your accomplishments