(Scroll down to skip the words and get to the pics)

Before we left I prepared by cancelling the newspaper (oddly, by phone is actually better than online; the deadlines are more relaxed), pre-purchased a Skybus ticket (you can print it yourself; very handy), and totally failed to even start packing before departure day.

We got out of the house a little later than planned, caught a train into the city, then (thanks to the Skybus pre-purchase) straight onto a bus to the airport. On the way I checked-in with my mobile phone; the concept of checking-in when you’re not actually at the airport is still a concept that I find somewhat intruiging.

When we actually got to the airport, the AirportAutoQantasCheckinMachine wouldn’t let us check-in our suitcase because we were running late; given it’s not too large and we had no sharp objects in it, a Qantas person recommended just taking it through with our hand luggage. A queue at security didn’t help, and the screens indicating “Flight closed” caused me to panic a bit, but we made it the gate with… oh, a minute or two to spare.

One of the runways was being dug up or vacuumed or something, causing a delay taking off. After that the flight when smoothly; entertainment was some news (including a long Higgs Boson Particle story, which caused me to remark “Yay science!”), an episode of Big Bang Theory and some Brit movie starring Harriet Jones MP, Professor McGonagall, and Bill Nighy.

There appeared to be an entire footy team (or at least, some young-uns from some WA AFL training academy) on the flight; they were pretty subdued, some of them watching videos of footy matches on their laptops (that’d be yawn-o-rama for me) though they did perk up/get a little noisier towards the end of the flight.

We landed in Perth pretty much on time, and met my aunt outside.

Into the car for a whirlwind tour of Perth, we headed initially into the Swan Valley, to the Margaret River Chocolate Factory (the branch that’s not actually in Margaret River, but in Perth) to have some hot chocolate and a snack and watch a continuous series of tourist buses rolling in. 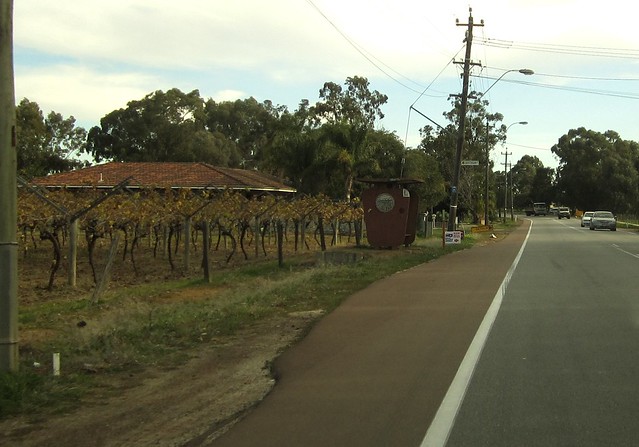 From there we headed past central Perth to Kings Park, a quite amazing open space overlooking the CBD and had a walk around.

We took a look at the war memorial (smaller than Melbourne’s Shrine, but with a view — at least from ground level — more spectacular), and a walk with views across the Swan River. Peak hour was just getting underway, and we watched the traffic slowly moving along the Kiwana Freeway, overtaken regularly by trains heading out along the new Mandurah railway line. Nice. 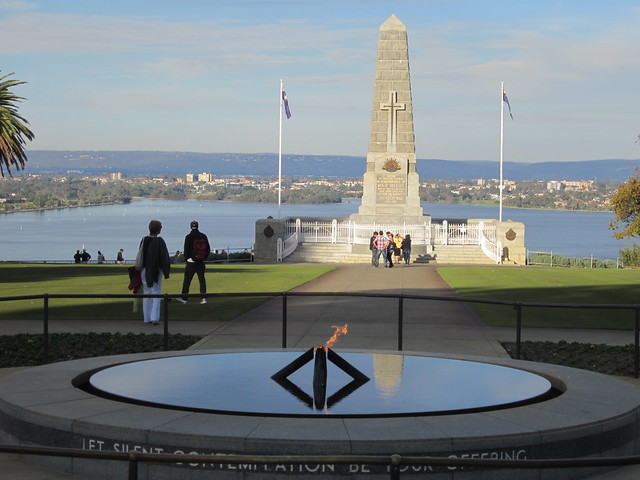 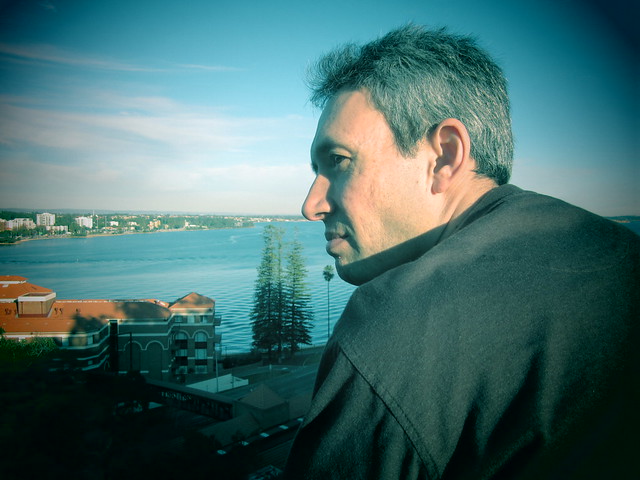 Jeremy gets arty with the camera at Kings Park 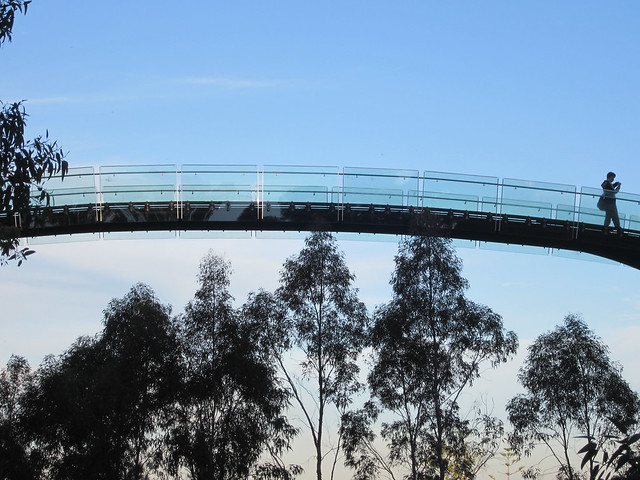 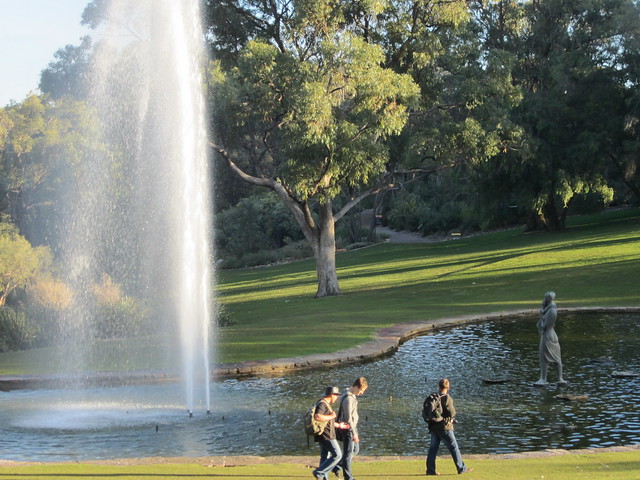 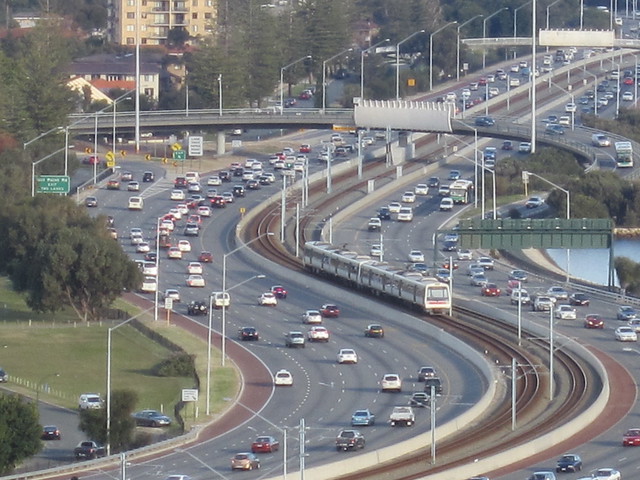 My aunt pointed out the honour avenues around the park, with trees planted in memory of those fallen on the front line in WW1. Even more sobering was the list of more recently fallen soldiers.

Then we headed south for a bit to look at the ritzy riverside suburb of Mosman Park, and also at Cottesloe beach – where we arrived just in time to watch the sunset over the Indian Ocean. 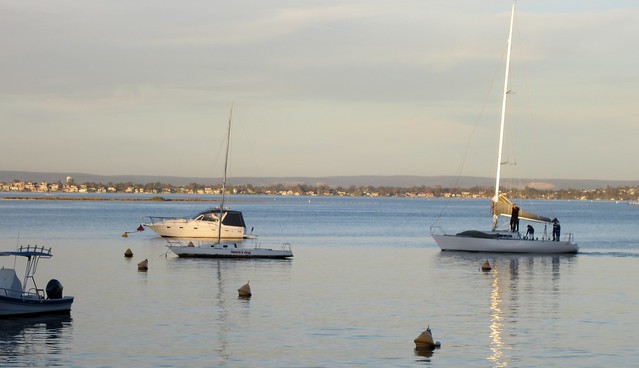 On the Swan River at Mosman Beach 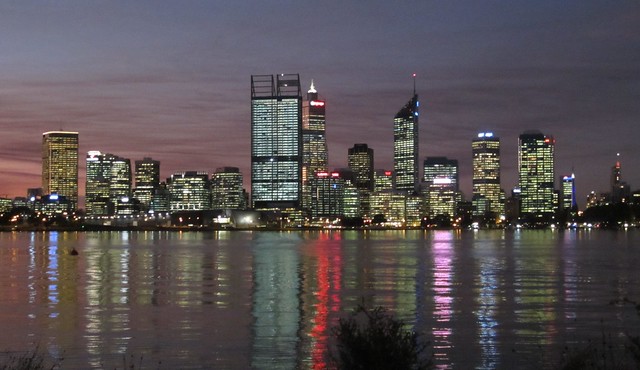 Perth skyline, from south of the river

This was followed by another riverside stop at South Perth, for views of the city. My aunt remarked that there are only half-a-dozen actual skyscrapers in Perth, though it looked like a few more to me.

After that we headed to her house, where she made us very welcome, cranked up the wifi, and cooked a huge meal for us to celebrate our arrival in WA.

An interesting installment of your trip and great pics (including Jeremy’s arty shot). Perh and surrounds is beautiful.
Given you almost missed your flight, wouldn’t it have been safer/quicker (and cheaper) to drive to the airport and leave your car in the LT carpark? Even better to get a friend/relo to drop you off!

Nice photos. Kings Park must be wonderful. I’ve had the impression that the freeway running along the riverbank is fairly ugly. It always seems to dominate in photos. I’ve also thought there are quite a lot of skyscrapers in Perth.

Love Perth (had our honeymoon there!)

But Daniel, sweetie lovey sweetie dearest honey boo – where are the photos of the CHOCOLATE…..?

@Andrew, the freeway isn’t pretty, but I didn’t think it overly intruded (at least, not looking down from Kings Park) — my attention was more drawn to the water and the city skyline. I’m adding a picture of the freeway, looking out of town, viewed from the park.

@Kath, haha, oddly enough I can’t find any pics of the chocolate. It must have been consumed too quickly!

So the checkin machine didn’t accept that you’d already checked in remotely. I’ve been wondering about that.