Got back from Perth last night. Had a great time, which you’ll hear about in due course, but first: something we spotted on the Skybus on the way home: Myki reader mounting points — and just like those that first appeared on trams a few years ago, they’re being used as brochure holders at the moment. 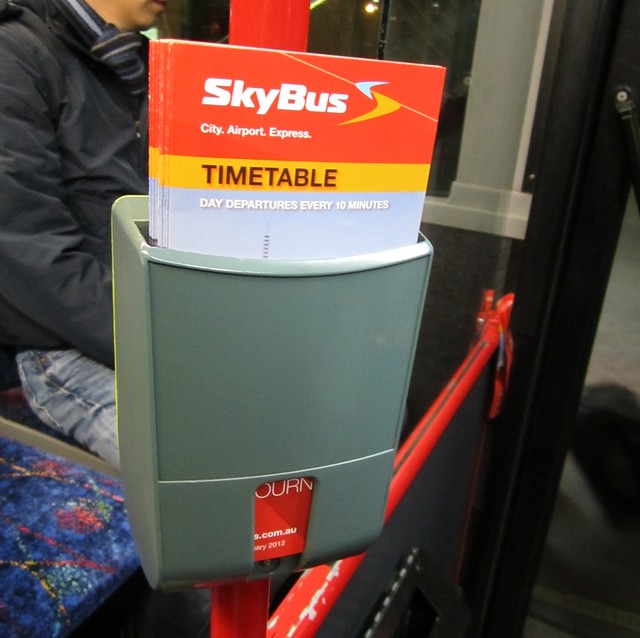 Proof, if any was needed, that it’s intended that Skybus is planned to join Myki at some point.

(This particular bus might have been brand new — it also had softer seats than the rock-hard bucket seats most of the Skybus has.)

Update: I’m told some of the Skybus fleet has had these mounting points for a while… which means the status of future Myki support for Skybus is uncertain — it may not have survived the Coalition government’s review of the system in 2011.

Good detective work!
It would be even better news if the Skybus myki ticket to the city cost $5.50. This is the cost of catching the 901 bus from the airport to Broadmeadows station and then a train into the city. Can’t see that happening!

Sure it’s not one of those things intended for myki at inception, that aren’t going to happen now it’s all even scaled back?

That red bar doesn’t look brand new. Maybe this bus is a repurposed one that just happens to have had the mount points? As long as this bus is “odd” in some way, I’m sceptical.

@Felix, Skybuses are quite different from Victorian buses others, with special luggage racks etc, and no other bendy buses in Victoria (that I recall) are red. If it was a renovated/repainted bus, I doubt they’d have left the Myki mounting points in there unless they were intended to be used eventually.

I bet these, like the Myki barriers at the V-line platforms at Southern Cross were installed before the cut down version of myki was decided upon by the (stupid) powers that be.

It does seem very puzzling that the vline expansion was scrapped though. Especially as my Myki already works in Bendigo, Geelong, etc and the hardware is already sitting at Southern Cross. Why not just write the damn software to calculate fares to other towns?

I’m told the mounting points were put in that bus some time ago, and may not reflect current govt policy.

@Julian, my assumption is the TTA don’t want to bite off more than they can chew.

Those mounting points have been installed on most Skybus buses for the past few years (At least since Jan 2009 anyway).