Some interesting stuff on social media in the Financial Review the other week:

This month, Cathay Pacific partnered with Klout to offer to anyone with a score over 40 free entry to the airline’s business class and first class lounge at San Francisco International Airport, the key hub for those working in Silicon Valley.

Neat, but it appears you had to show your Klout score on an iPhone app. Difficult if you don’t have an iPhone, though I expect the vast majority in Silicon Valley do.

The managing director of recruiter Kelly Services Australia, Karen Colfer, is not on Klout, but says everyone should have a LinkedIn profile.

With a 23-year career in recruitment, Colfer says background checking is becoming increasingly thorough and information is easier to get. Google, LinkedIn and blogs are all fair game, she says.

— How much Klout do you have online?

I’m faintly amused that Klout believes I am influential in piracy. Arrrrrr, me hearties. 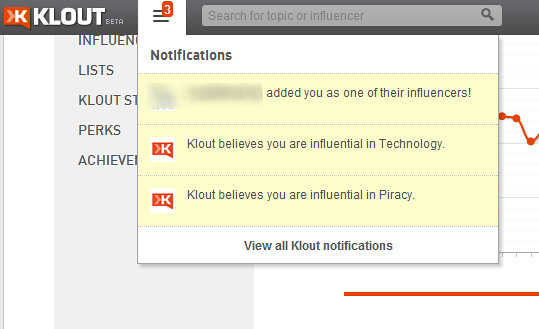 Piracy eh? Well… it’s true that one of my eyes doesn’t work.

Also in the Fin, in a separate article on Twitter:

Public Transport Users Association president Daniel Bowen tweets a lot and follows a mix of people from diverse areas. “Depending on who you follow, it’s obviously highly customisable to what your different interests are,” he says, before warning. “It is addictive … I have to curb my usage, otherwise I wouldn’t get anything done.”

Now get back to work.

One reply on “I be influential in piracy, me hearties (according to Klout)”