The Herald Sun reports today that Metro punctuality figures have improved markedly in the last 12 months, including the figure on the Frankston line jumping from 68.4% to 87.1%.

Certainly this is due to some changes in the way the trains are run. The question is, are these changes good, or bad?

Traditionally Melbourne’s suburban station platforms are numbered so that platform 1 is the one usually used for city-bound trains.

This means platform 1 is also usually on the left (facing the city). An exception is at Westona, where the trains arrive on the right (I’m guessing it’s perhaps because they’d prefer the driver, in the left of the cab, to have better visibility of the platform).

At my local station Bentleigh, there are three platforms, in the morning using two of them in city-bound direction. It used to be that stopping trains would use platform 1, and express trains would zoom through platform 2, with trains from the city using platform 3.

Reflecting this, almost all the benches on the platform face platform 1.

Last year it changed, with at least two stopping trains using platform 2, and some express trains going through platform 1. Call me slow, but I just figured out why. 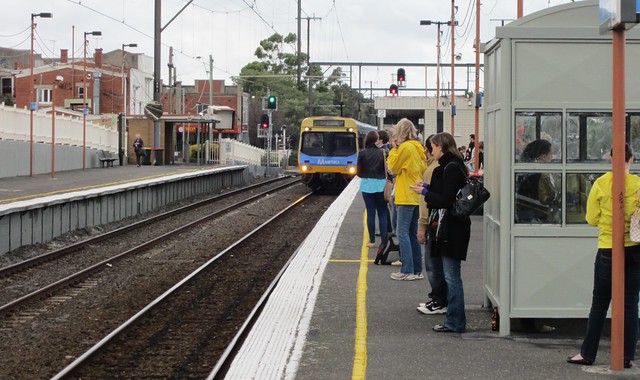 It’s because those two services start at Moorabbin two stations away, and are formed by trains from the city that terminate there, then reverse back into the city. Running them on platform 2 (the middle track) means they don’t have to cross two tracks at Moorabbin (from track 3 to track 1), risking delaying other citybound trains.

This may seem like a trivial, inconsequential change, but this sort of thing — making little tweaks to operations to better use the infrastructure capacity available, with only minor impact to passengers — is what we need to see more of.

In contrast, the widespread alteration of services to run express because they’re late is having a detrimental impact. Metro are claiming it’s rare and “for the greater good”.

It might be understandable if they were only doing it, for instance, to off-peak trains, in order to get trains into position for the peak, but there is plenty of evidence to suggest that is not the case.

For instance, on Friday (the morning of The Age’s story on it), the 8:25 from Moorabbin was altered to run express to Caulfield. I saw it fly through Bentleigh at 8:31, which means assuming a minute was gained between Moorabbin and Bentleigh, it was only 2-3 minutes late. It would have arrived at Caulfield early, and all the passengers from Patterson to Glenhuntly had to cram onto the following train.

This particular service has plenty of fat in its schedule anyway — it regularly arrives at South Yarra 2+ minutes early due to excessive timetable padding, so the late change was for no good reason. This is not good customer service from Metro.

Another recent example was the 6pm-ish departure to Frankston, altered to skip most of its stations, as highlighted last month on the PTUA web site and in Friday’s Channel 10 story:

5 replies on “Metro changes to achieve punctuality: good and bad”

As rare as a malfunctioning MyKi reader.

It is really not good enough if the train goes straight through “B” to get to “C.”

Metro are supposed to be providing a service – not inconveniencing us to minimise their own fines.

The switch at Moorabin seems perfectly sensible provided Platforms 1 and 2 are an island platform. If they weren’t it would be a bit more of a hassle.

Ha! I, too, was waiting for that train and had to cram on the following one.

I certainly wasn’t happy standing on an extremely cold and wet platform watching the train I wanted to catch run through with 20 people on board.

It’s a good example of the old saying “you manage what you measure”. The government measures lateness, short shunting, and cancellations and fines Metro. So Metro comes up with methods of catching up to the timetable that aren’t measured. For the greater good, no doubt, of their shareholders.

Yes this happened to me recently too. Unfortunately it was nearly impossible to hear the announcements made at the station (Hughesdale) about this – I managed to piece the information together after standing directly under the speaker and listening to the announcement 3 times. So I, alone out of the 80 or so people on the station was not surprised when the mostly empty train went whooshing by, skipping Huntingdale, Hughesdale, Murrumbeena and Carnegie.