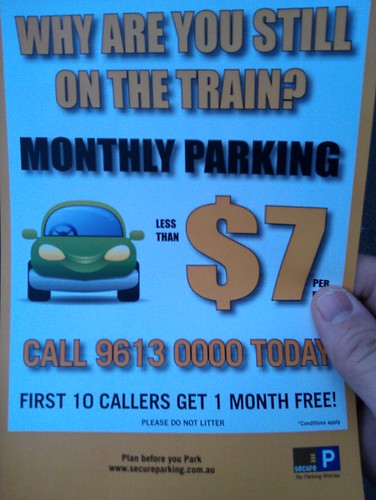 Someone was handing these out at Flagstaff station the other day. The bloke was in the exit area at ground-level, and was not on the public footpath. If it were Southern Cross station, where the security guards are super-vigilant about this kind of thing, he’d have been moved on unless he had a commercial arrangement with the station operator.

(It could be worse; 10ish years the original incarnation of Yarra Trams was encouraging people to give up on public transport for 90% of their trip; drive to Docklands Stadium, the Tennis Centre or Melbourne Museum, eg battle through most of the traffic, and park & ride a tram to work. For a while they promoted this by handing out brochures outside Parliament station, and via banners on fences outside the Tennis Centre that faced towards nobody but passing rail passengers.)

So, why am I still on the train?

Because the heavy traffic I’d face while driving is a waste of my time. (Google maps estimates a travel time of 27-40 minutes depending on traffic; the train trip is about 25 minutes.)

Because not being able to play with my phone or read a book or newspaper while travelling is a waste of my time.

Because parking costs alone at around $7 per day is more than the cost of my daily travel (based on $1215 for a discounted Yearly Myki Pass and travel of at least 220 days per year = $5.52 per day).

Because petrol at $1.47 per litre (or whatever it is this week) is a waste of my money.

Because the wear and tear of an extra 30km round trip per day would cost me even more money.

Because I have no wish to add more smog and petrol burning emissions to the environment, nor add to the traffic.

Because despite problems, most of the trains turn up, and they are mostly (more-or-less) on time.

Because leaving my car in the driveway may be (hopefully, maybe?) a deterrent to burglars.

Because the walk to and from the station is doing me good.

And finally because, well, for me, it’d wouldn’t be a good look to drive to work :-)

Update: Dallas noted the text on their web site:

If you’re fed up with the stress that comes with catching public transport and you’re looking for a safe, secure and convenient place to park your car any time of the day or night, Secure Parking has the solution for you.

Thanks, I’ll give it a miss.

10 replies on “Parking promotion: “Why are you still on the train?” Lots of reasons actually.”

“Because leaving my car in the driveway may be (hopefully, maybe?) a deterrent to burglars.”

Is that why so many people here leave cars in driveways? In the place I lived before Melbourne (inner suburban Wellington, NZ), leaving a car outside was just an invitation for someone to walk along the street and smash all the wing mirrors. Cars burn cash merely though owning and leaving them off the road 365 days a year, which is another reason I dislike them. The only reason we have a small car at all is that public transport around here makes it so difficult to go either sideways, or to places where there are few people. :( I can understand the latter, but the former’s a bit frustrating at times.

Well done Daniel. I’m amused when ever I attend a course or event in the CBD the organisers send me info on where to park my car. No way!

@MikeM, “Is that why so many people here leave cars in driveways?” — do you mean as opposed to leaving them in carports or garages?

The reason I said driveway is that my house only has a driveway — which is common for older houses from the period before cars got popular.

I’d be interested in the “special conditions” attached to that less-than-$7-a-day parking!

I doubt whether it is as cheap or convenient as it initially appears.

Why am I glad that, at 35 years of age, I finally got my drivers licence and got my first car last year?

I no longer have to look down at my ipod (earplugs firmly in) and pretend I don’t notice the public disturbance that can at times be hostile/illegal and therefore make me morally obligated to intervene had I noticed, and not entranced by my iPod. BEST LIFE CHANGE EVER.

Please print your list and hand it to the guy at the station.

Or, at least, email it to secureparking.

I’d say that I notice FAR more hostile/illegal things on the road as a driver than ever on public transport. Lots of road rage induced acts going on if you’ve been driving for enough years you see alot…even punch ups/broken windows/wilfully damaged cars.. not to mention stupid behaviour from drivers regarding pedestrian crossings/speeding etc. The problem is that the metal shell cocoon of the car isolates us from others…or perhaps induces some kind of bravado.

I read all that old stuff about the park-and-tram, and it is not actually all that bad. There are a lot of people who don’t have convenient access to the trains. There are even a lot of people in quite close suburbs who don’t have convenient access to the trams either.
That scheme made good use of parking facilities which, at the time, were much under-utilised during the week.
People who are only catching the tram for 1 or 2 km are unlikely to grumble too much about overcrowding.
By utilising parking outside the city core, they are reducing traffic in the city.
It also reduces pressure on on-street parking in the near-city area.
The only thing that struck me as quite strange, was the 7 PM deadline.