Sometimes it seems there are way more trains running in the counter-peak direction than the peak… particularly towards the end of the morning peak, and before the evening peak. 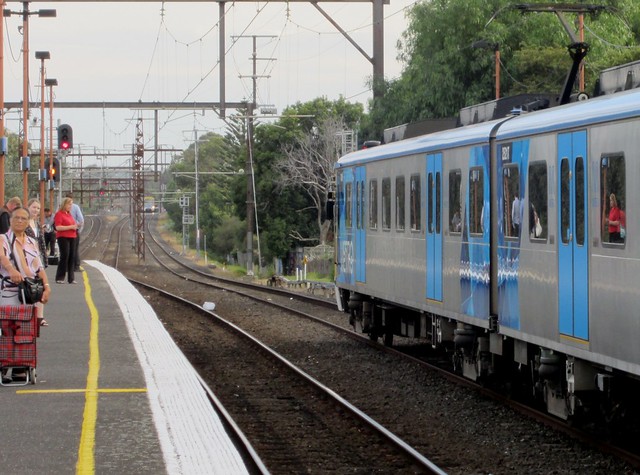 This is because there’s little train stabling in the central city area, so most trains have to be sent back to the burbs between the peaks. There used to be heaps of stabling between Flinders Street and Richmond for instance, much of which has been taken over by the tennis centre and housing around Jolimont.

Some of those counter-peak morning trains terminate at Moorabbin and run back into the city, thus taking at least two AM peak loads each morning.

In contrast, many buses along the Centre Road 703 route seem to run out of service between Brighton and the South Oakleigh depot. This is a shame, but I suppose too many passengers would impact running times and blow out costs/break times — probably inevitable while bus drivers are selling tickets.

Happens out in Toronto too. No stabling for Subway trains close enough to the Downtown. So you’d have many trains running back up to line to Downsview or Finch which is at the other end of the line. However the Commuter Rail system (GO Transit) has large stabling by Union Station in Downtown Toronto so the trains wouldn’t have to deadhead back up the line.

@Jimmy yeah I suspect it’s not uncommon in many cities. After all, lots of space for train stabling is not good use of land in central cities.

Urban planning that promotes polycentric cities (in the Melbourne context, big centres at Ringwood, Dandenong, Frankston, Broadmeadows etc) helps, as then you need peak services in both directions, balancing things out a bit.

Yes, presumably the smaller the differential between peak and offpeak service, the lower the requirement for daytime stabling.

I guess you still need to park them somewhere at night – can/are trains be stabled in city stations or the Loop overnight?

Now, if the expresses would stop again at Bentleigh, then your argument would be totally destroyed. It’s the new slow timetable that’s to blame!

In the real world, polycentric cities only promote car use.

There seems to be a remarkably short headway between those two trains in your photo.

Umm – weren’t hectares of stabling space at Flinders St sold off for private residential development in the Kennett era, to which we owe so much of what we endure today?

@Rick, part of the former Jolimont yards (on the northern side) is now housing, but I’m not sure when it was sold/converted. The bulk on the southern side became the tennis centre and Birrarung Marr, so it’s still public land.

What disappoints me about Melbourne train network is this incessant need for all trains to use Flinders Streetand stop for a period of 5 – 10 minutes at Flinders Street.
This syndrome alone is a cause of many capacity issues
Why ? it has no genuine advantage

16 Train Lines and 13 Platforms at Flinders + 10 Minute parking means capacity limit of 1 Train per 15 minutes across all lines plus any padding to run ontime.
Lets not even mention what happens when a train breaks down at Flinders Street.

With minor investments Melbourne Should be operational a centre point not a core destination.

Trains from Richmond head to Flinders Street, then they should immediately head Straight out to a Western Suburbs without loading the Loop or parking at Flinders for servicing and direction changes
and same in reverse

Likewise
Burnley Loop should go straight from Richmond to Parliament, then straight out to Jolimont without loading the Loop or parking at Flinders for servicing
and same in reverse

Any survey will identify that currently trains are nearly empty commuters exiting at Parliament and Flinders street meaning that the full loop does not need such a high volume of trains terminating at Flinders instead one or two continuous service looping through the loop.