It was time to go bush. We picked up a booked car at Europcar (around the corner from the hotel, though it turned out Thrifty was also close-by) and after some negotiating of central Brisbane’s one way streets, found the Pacific Motorway.

One way streets don’t affect one as a pedestrian, but certainly make themselves obvious in a car. It’s not something I think about in Melbourne, where thanks to Robert Hoddle all the main streets run in both directions, but from my observations, Hobart, Sydney and Brisbane all have narrower main streets, many of which over the years have been switched to one way.

We stopped off at Westfield Garden City (though finding it was not without its challenges — I had assumed it would be an easy detour off the motorway) to buy Isaac a hat, and also to see if we could locate the local Gametraders store, which I knew Jeremy would be keen to check out.

The hat was easily found, but the Gametraders had disappeared, despite being listed on Google Maps and in the directories inside the centre. (The authoritative source, the Gametraders web site is a Flash-dominated monstrosity that does not display properly on my phone.) The lady at the ABC shop, opposite where it should have been, said it had only recently gone. 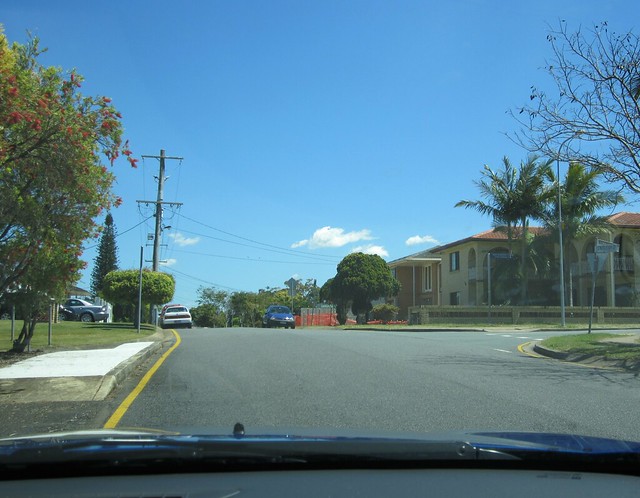 On we journeyed, managing to go in a complete and lengthy circle around the lovely parkside suburb of Macgregor, and then back into the shopping centre before we found the entrance onto the motorway again.

No such geographically-challenged navigation on the rest of the trip to Mount Tamborine and the Rainforest Skywalk, though we did observe a bloke in a 4WD reversing out of a car park space bowl-over a sign, despite having being guided out of the spot by an attendant.

The Skywalk was quite enjoyable… initially along walkways high off the ground, among the treetops, and then heading back to the visitors centre along paths in the undergrowth. We had lunch there, and then headed onwards. 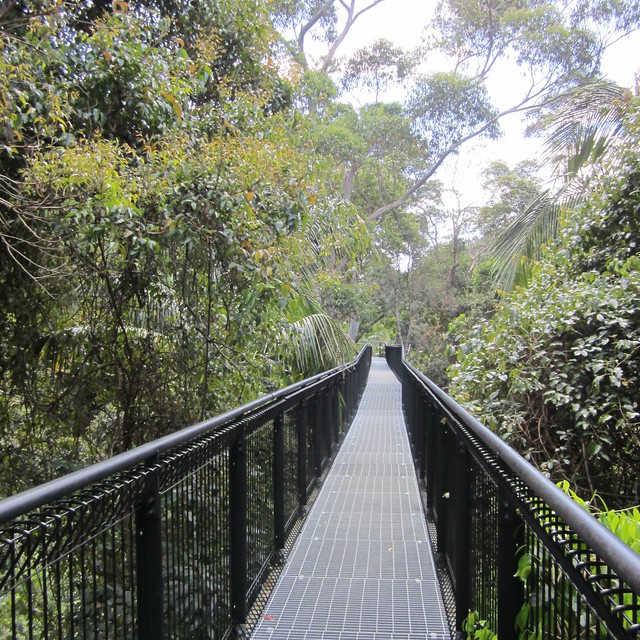 The lady at Europcar had recommended the cheese factory, which is co-located with the brewery. That looked interesting, and would have been a good spot for lunch if we hadn’t already eaten, so we headed for the next stop, the Witches Falls circuit walk.

This 3.1 kilometre walk took us all the day down from the top of a ridge to an area perhaps halfway up the mountain, in a zig-zag (like a giant, real-life Donkey Kong). There was some spectacular scenery, including those weird trees that grow around other trees — like a super-powered version of the creeper in my garden. 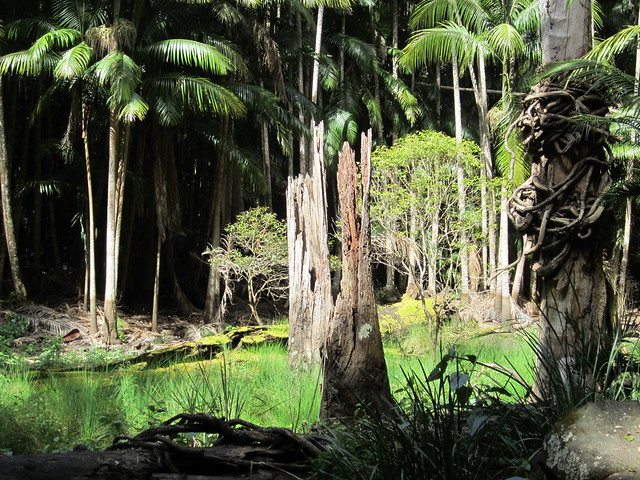 Along the way we saw a relative of the kangaroo… not sure what it is — don’t think it’s a wallaby, and it’s too big to be a potaroo. Can anybody identify it?

There were also several bush turkeys, and eventually we got to the very impressive waterfall lookout, before heading back up to the top.

We explored a few other spots around the mountain, stopping for ice-creams and then at a fudge shop, where a procession of kids who seemed to be constantly asking for samples of various flavours amazed me by actually buying some fudge. Sometimes I’m too cynical. Anyway, we bought some and then hit the road.

I had wondered if we could make it back up the highway to Logan Hyperdome, where during the day I had verified that there was still a Gametraders. I verified it by ringing them up and asking what time they closed. 5:30.

This would have worked, too, if we hadn’t encountered roadworks heading back to the highway, and then a dreaded portent: a sign warning of major delays near exit 41. Sure enough, it was major delays, and we probably spent the best part of an hour in stop-start traffic. The radio said rocks were on the road (presumably fallen from a truck) and they’d even called in a bobcat to clear it up. 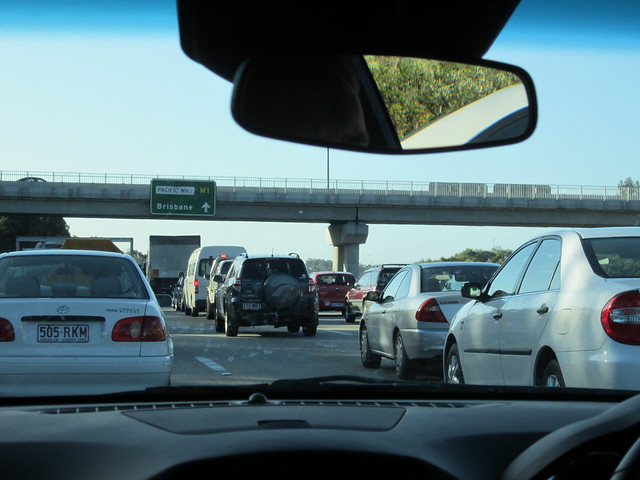 Eventually we got past it, but it was right on 5:30, with no hope of getting to Logan on time. Oh well, we tried. Instead we pulled off the road, stretched our legs and ate some fudge as compensation.

The rest of the journey back to Brisbane was fairly uneventful, apart from some more (minor) delays on the Riverside Expressway, and more battling of the one-way streets to firstly fill up the car, and then get back to the hotel carpark — while the petrol station was only a stone’s throw from the hotel, in the car it was about ten times that far. In fact Google Maps reckons it’s 200 metres vs 1200 metres.

We spent the rest of the evening ordering and munching on pizza, watching TV and admiring the view. 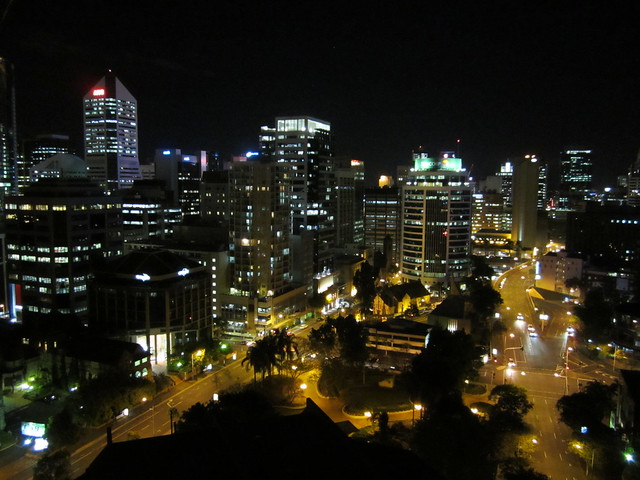 5 replies on “Brisbane day 4 – can you identify the animal?”

Looks more like a pademelon, which is a wallaby.

Not sure what the animal is.
Brissie is very tropical – October is a good time of year to visit.

Was that the fudge shop in Springbrook Daniel? The fudge was so good when we were there last month, that we went back for more to bring home for family & friends in Melbourne. Mount Tamborine wasn’t practical for us with our 18 month old… maybe next time! Glad you all enjoyed your trip