Day three in Brisbane, and it was time to get to the whole point of the trip: to visit my Dad’s memorial bench at the University of Queensland.

After waiting for my Uncle Frank (Dad’s last remaining sibling) to arrive (his bus was delayed), we headed down Adelaide Street to find the 109 — not the 109 tram I’m more familiar with, but the 109 bus to UQ’s St Lucia campus.

We probably should have checked which bus to catch down Adelaide Street, because it was a long walk to the relevant stop, but eventually we found it, and didn’t have long to wait.

The bus headed across the river, along Brisbane’s much-vaunted (at least by Bus Rapid Transit enthusiasts) and rather impressive (no matter who you are) bus ways. More about this, and Brisbane’s PT in general, in a later post. 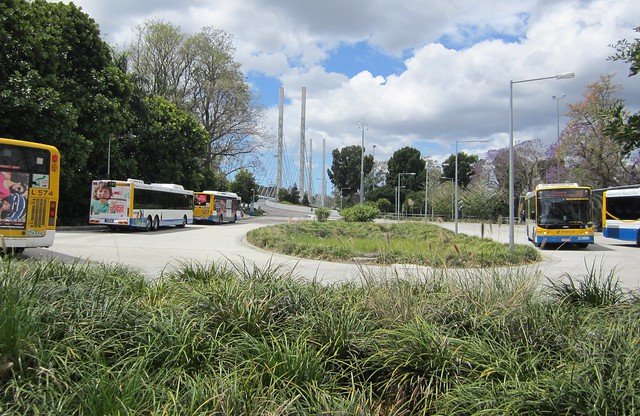 We arrived at the UQ campus, and strolled over to where we thought the bench would be. As we approached, I noted a crowd around one bench, and remarked that it would be embarassing if that was the bench we sought.

A group of perhaps 30 students was crowded around it, having a picnic. Somehow my sister managed to find their leaders and ask politely if they’d mind moving… which they very gracefully did, though it appeared that rather than move, they broke up their party. Oops.

Anyway, there we finally were: the memorial bench. 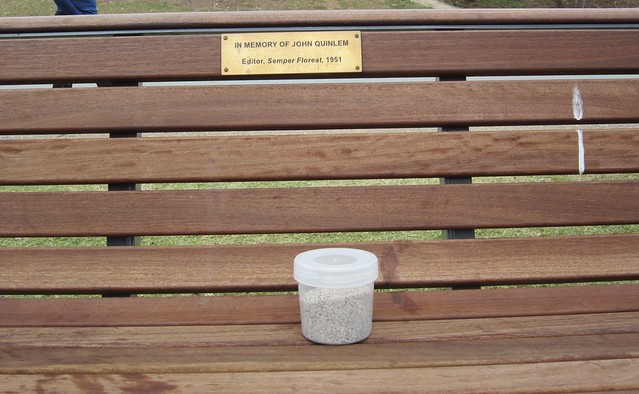 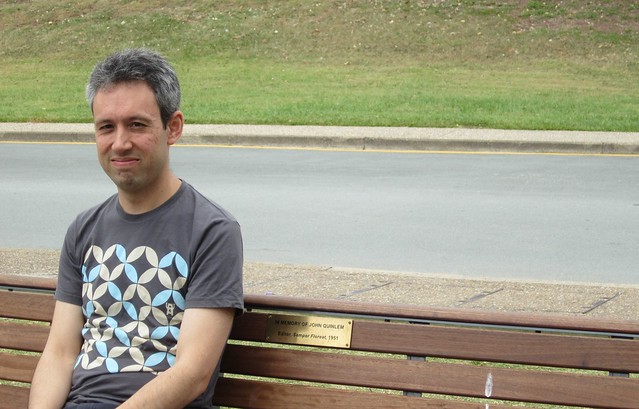 It was a nice spot. Despite nearby building construction, a very peaceful location by the lake. Dad would have liked it, I think. The bench is nice too, and with a bit of luck should be there for a good few years into the future.

We had a small container with some of Dad’s ashes, and sat him on the bench, before scattering some of them into the lake, and snapped a few pictures. A passer-by helpfully took a photo of all of us.

Afterwards we headed for the ferry terminal, to catch the City Cat back to central Brisbane. The sun was shining, and (after touching our Go cards) we sat out on the back deck as we zoomed along the river, dropping the remaining ashes into the water as we sped along. (Most of the ashes remain at home in Melbourne. I expect they’ll go on the garden.) 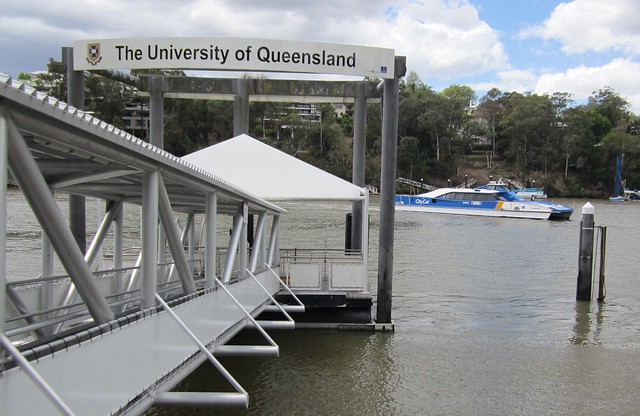 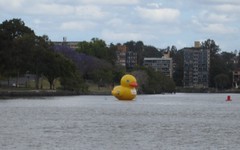 Frank pointed out the Regatta Hotel (after which the Regatta wharf City Cat stop is named), and recounted the incident when Merle Thornton (mother of Sigrid) and Rosalie Bognor chained themselves to the bar in protest against men-only public bars. He reckoned Dad knew Merle and her husband, and had later been an occasional babysitter for the young Sigrid in London in the late-60s.

We got off the ferry at Southbank. Frank verified that it was indeed the same area that I remembered from visiting Expo 88 when I was but a teenager. It’s quite different now, though I recognised one of the towers from my earlier visit. We found some lunch (sandwiches or kebabs, according to preference) and ate while a rainshower came through, drenching anything and everything not undercover.

My sister and her family were keen to head towards the Gold Coast before too long, so we found South Brisbane Station and caught a train with them back to Central so they could collect their baggage. As we left Central, it started to pour down, and for a while we took cover and watched the rain come down. I took the opportunity to try out the slow-motion filming on my camera — very cool.

At some point Adrian and I decided to dash for the baggage, and everyone else went back into Central station to find a hot chocolate. We met up a little while later, and everyone boarded a train for the Gold Coast, with my mob and Frank getting off again at South Brisbane to go look at the science museum.

Alas, the science museum was closed, renovations until January.

Instead we headed over to GOMA — the Gallery of Modern Art, and had a look around there. We’d just missed the Surrealism exhibition, which would have been quite interesting, but instead had a look at an exhibit of modern art from the Torres Strait, which Frank noted was where our Chinese ancestors had initially settled before moving on to Brisbane during WW2. There was some interesting stuff, though the boys at one stage decided to just sit and chat on a comfy couch rather than walk around the gallery… fair enough.

After that we walked to the Cultural Centre busway stop, and thanks to the excellent Translink mobile journey planner web site (why doesn’t Metlink have that?), I was able to tell which buses we could catch to a stop back closer to the hotel than we’d set out from that morning.

We farewelled Frank and headed back to the hotel for pasta, TV and sleep.

Interesting description of your travels. Did you see any/much evidence of the summer floods?

@Roger, none at all, though we weren’t looking out for it.

Along the river there were some pretty wonky-looking jetties.

The Metlink app has a journey planner and some other handy functions (Next five is my favourite)
http://www.metlinkmelbourne.com.au/application/iphone/

@Altissima, yes, Metlink has both iPhone and Android apps. I think they should have gone down the road of concentrating on a single, effective mobile web site instead — as Translink did. No installation issues/hurdles, and a single codebase, and would work on all mobile devices.

Hmm, might blog about this a bit more at some stage.

A nice – and fitting – tribute to your Dad Daniel. I’m us he would have been very chuffed to have you visit his place in the sun at UQ.

Most of the flood damage has been rectified – with the exception of the river itself with city cat tminals and walkways being fixed or replaced. There is still an excavation pit in Mary Street which is about 30 meters deep for the foundations of a building which is still 90% full of water – and just gets topped up with every storm…. I think they are worried if they empty it, the surrounding building foundations will be weakened…l

Sorry – should be I’m SURE he would be chuffed….

Touching tribute… although looks like your dad’s bench could do with some cleaning!

@Oz, yeah we unfortunately neglected to take anything to clean it, but the rain later in the day should have taken care of the bird poo.