I’ve already posted about the mess that may ensue if once Myki is fully rolled-out, there is no option of a single-use ticket.

Today it’s been flagged as probable that some 50 million of the unused Short Term Tickets will be pulped, and also that almost 500 vending machines originally intended for trams are likely to be re-deployed onto tram and bus stops and interchanges.

There’s still no answer on whether reusable Myki cards will be made refundable for tourists, subject to another free offer period for locals, or whether top-up will be made available on buses.

But in the mean time, you may be interested to know that this Short Term Ticket bought in Bendigo in September 2009 (with a 2-hour fare) still works — the Myki reader on a tram at lunchtime today recognised it and responded correctly, saying it had expired.

PS. Special bonus for Myki-nerds: an error I haven’t seen before, which we managed to produce by placing a Queensland Go card and a Myki on the vending machine reader together. 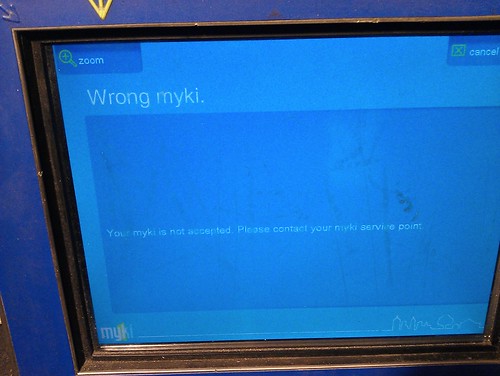 (I wonder if they realised the colour scheme resembles the default colours from a Commodore 64?)

There’s also the issue of long-term Myki expiry. I recall reading early-on that they would expire after four years. Are we all going to be slugged $10 every time this happens?

The gov has to be planning something practical for casual users and tourists, surely. I suppose it is good to make a fuss to ensure they do.

@Paul, still unknown. Govt needs to make up its mind on this.

I used a My Way card in Canberra on the weekend. It worked perfectly, very fast, and cheap too ($2 to go anywhere, daily limit of $4.60). I particularly like the idea of every trip after 36 in a calendar month being free.

And they had paper tickets as well for people without the smart card.

Anyway, it was $20, from the always-open newsagent right in the middle of all the bus stops in the city, and you got $20 credit. No instructions came with it, but it was obvious by the BPay thing on the front that you could top it up that way (didn’t seem to be any other way, but $20 gets you a lot of trips).

This scrapping of short-term tickets has got to be the worst possible decision they could have made, not just for Myki, but for PT in Melbourne as a whole.

It’s just not going to work, and as an observer who has seen the scratch-ticket experiment fail, the stubborn refusal to sell daily tickets on trams fail, I get the horrible feeling that this could be another issue that will bring down a governement. But, of course, before it’s resolved we the public will have to suffer through massive inconvenience, and we the taxpayer will have to suffer through a huge cost before common sense is finally realised.

As for the default “Commodore 64” colours – did no-one test these on a machine in bright sunlight? The low contrast makes it almost impossible to read, requiring the use of the weirdly-named “Zoom” mode to increase contrast every time.

If someone leaves their Myki at home they are bound to fare evade, it’s not like they’re going to shell out an extra $10 to buy another Myki for the day.

“…every trip after 36 in a calendar month being free….”

Brilliant! Far too clever for this State though.

My bet is the savings being made in abolishing short term tickets will be more than offset by the increase in fare evasion.

Some people will do it in protest, but the biggest increase will be inadvertent.

* People that for whatever reason forget their myki
* Tourists that don’t know they need to buy a Myki (or where to get one)
* People that don’t realise their myki doesn’t have enough credit before they get on a tram.

You can add to that, people who do bother to check their myki balance on the Internet and get fooled because their last previous trip isn’t deducted.

Julian wrote: People that don’t realise their myki doesn’t have enough credit before they get on a tram.

Myki allows you to go up to $10 negative for one trip. Provided you have at least 1 cent on your Myki, it will validate and you can ride. The only catch is that you can’t get on a second tram (or train or bus) until you have topped up to a positive balance – even though you might have a valid 2 hour ticket on the Myki.

(This ability to go upto $10 negative is precisely the reason why they charge $10 for a Myki.)

I still would like to know what would be involved in getting the paypass/paywave cards authorised for single trips. It is the same protocol. In theory it is just a license issue and a bit of jiggery pokery at the back end. They could just charge double for the fare to force people to use myki (call it a tourist tax) to recover transaction costs.

Can you ask Daniel?

I recently discovered that, if you use a card to top-up your myki balance, the machine prints out a receipt with your FULL NAME and most of your card number – even if you had selected ‘no receipt’! I reeeeaaalllly do not like that.

@Andrew – The Canberran MyWay card will also let you go into a negative balance, but if your ticket is still valid, you can reswipe onto a new vehicle (transfer), unlike Myki. I think the whole MyWay system cost $8m… and it works.

With the phase out of short term myki’s

What if I am a current Myki holder, am going to work and waiting at the station but realize I left my Myki at home?

Not every station is near a retail store, let alone one that sells Myki’s.

What would we do?

It is likely that station machines will sell you another Myki card… at a cost of course.

People will have to get used to keeping them with them at all times. (You can keep it in your wallet and never take it out.)