There’s a billboard facing the light rail (tram) line to St Kilda, near the City Road station. As far as I can see, from its positioning, it is visible only to tram passengers.

What’s it advertising this month? It’s Metro’s “This is me” campaign. 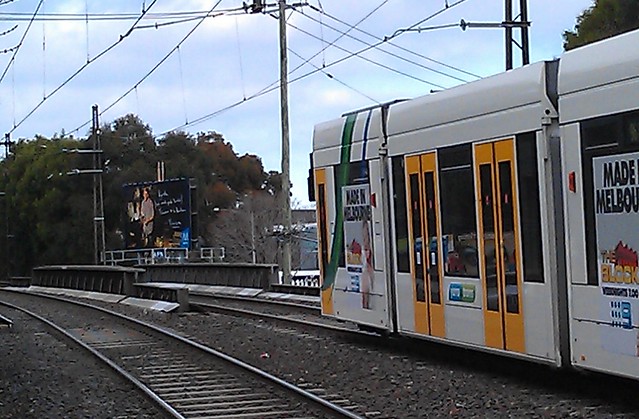 These adverts have come under some criticism.

…encouraging yet more passengers on to our packed trains is a bit like running an ad campaign for a concert that sold out months ago. As much as we’d like to inspire more people to use public transport, they’d only be disappointed.

— Time to put the brakes on Metro’s advertising spending spree, The Age

But there’s an important point lost in some of the debate, which was hidden away in this article on predictions that Metro patronage will double in the next ten years:

The documents obtained by The Sunday Age show that the next decade will see a surge in the use of all modes of public transport: not only will train patronage rise at all times of the day and on weekends, bus travel is expected to double and tram use is predicted to rise by one third.

They don’t need to advertise to attract more passengers in peak hours. They already have all the passengers they can handle.

But growth in the off-peak periods, when there are trains and track capacity to spare, would have to be an important way for Metro to increase revenue. It can be sparked by running extra services (after all, increasingly weekend and evening services are crowded, and waiting times are often excessive), and the lure of extra off-peak revenue is probably the motivation for the above advertising, and for the Metro slogan of “For everyone, every day”.

I was going to write a bit more on this point, but realised I already have done so, so I won’t bother again.

As such, perhaps looking more broadly than just trains, the campaign might encourage tram and bus users do use public transport for more of their travel. Don’t know.

Still, I was faintly amused by the placement of the billboard.

4 replies on “Preaching to the converted?”

The real reason this billboard is there, is that the tram-riding public are such an uninteresting demographic for companies which advertise, that no company which advertises can be bothered to get its own billboard put there.

It’d be interesting to find out whether that billboard was there in pre-LR days.

Also, interesting that you referred to the City Road “station”. :D

The last thing you want to do after riding commuter trains all week, is get on a train on the weekend.

A steam train would be good though, with old carriages, open windows and smoking cars, yeah.

Is that Courtney the Barista from the place in Degraves Subway???

In the ad, which I saw being flimed at Hawthorn Station, Courtney gets off the train at Hawthorn.

I wonder if he actually does live here. I don’t think I’ve ever seen him, but he probably keeps different hours to me.