Last week a lady was tragically killed on the level crossing at Bentleigh station, when she walked in front of an express train.

I’d never do it, but unfortunately far too often people do take the risk. It’s not difficult — despite the upgrade, if you approach the crossing from the right hand footpath, you can dodge the locked gate by simply walking around the fencing along the road.

Four people have been killed there in recent years: in 1998, 2000, 2004 and last week. All four have walked into the paths of express trains during morning peak, though until the most recent one, I believe it has involved pushing through the pedestrian gates. These gates were upgraded, and now lock. 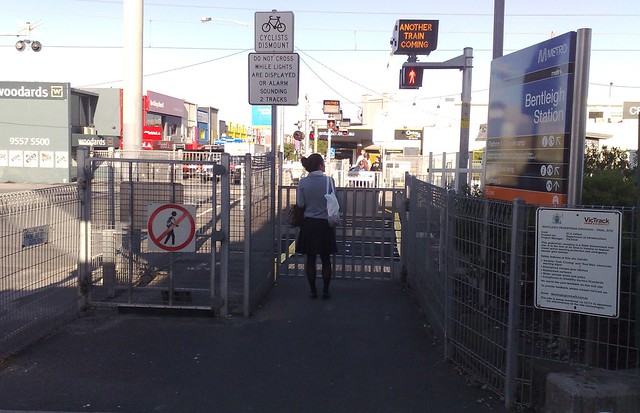 Since the upgrade, the warning signals at the crossing are plentiful: apart from the usual boom gates, pedestrian gates, bells, and flashing lights, the crossing also has a red man indicator, and “Another train coming” sign that lights up when appropriate.

One can blame the people involved for ignoring all this, but no matter who’s to blame, one has to look at what else can be done to prevent it happening again.

A boom gate on the right hand side of the road? Not normally done in Victoria — my understanding is they want an escape route for any cars that might (incorrectly, and illegally) find themselves stopped on the crossing when the booms go down. 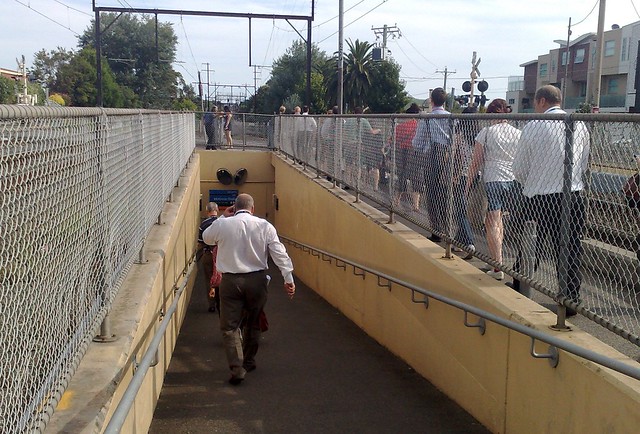 It’s notable that all those deaths have been since the pedestrian underpass was filled-in in 1996. Following the 2004 death, reinstating this was looked at. From the Herald Sun 8/9/2005 Tunnel a no-go zone:

BENTLEIGH railway station’s pedestrian underpass will not reopen despite a
report that found it was technically possible.
…

Transport Minister Peter Batchelor said reopening the old underpass was not feasible. “It was closed because of some deficiencies in its design, because it had problems with flooding when it rained and it had other operational issues,” he said.

But a consultant’s report prepared for the State Government found those problems could be fixed.

The estimated cost of reopening the subway was up to $2 million.

But Mr Batchelor said the underpass could not meet requirements of the Disability Discrimination Act.

Instead, an enhanced ground-level crossing would be installed.

Those enhancements ended up costing $1.2 million. And it appears they still haven’t solved the problem, since people still walk across the tracks when they shouldn’t.

I love the DDA point from Batchelor. Does the underpass which is okay for (perhaps) 90% of people need to be DDA-compliant if those who can’t cope with stairs can still cross at most times at street level?

Many crossings have both over/underpasses and street-level crossing, for instance at Mckinnon (pictured above), Ormond, Brighton Beach, Ripponlea, and others. Some have ramps as well as steps (though the ramps aren’t necessarily DDA-complaint).

It would be interesting to know how often these kinds of accidents occur at locations with conveniently-placed crossing facilities.

Short of complete grade separation of the rail line at Bentleigh, it would seem to make sense for them to look at re-instating the underpass.

Good points you make.
Despite the underpass at Brighton Beach station, I see many pedestrians and cyclists dash across the tracks when the boom gates are down.
These people are usually middle-aged, not reckless teenagers. Why?

Why should we pay $2 million to further wrap those stupid enough to cross against the warnings in more cotton wool? It’s quite simple. Flashing lights, gates closed, bells ringing, even a sign that spells out that another train is coming! Stop blaming the government for this! I bet any money that if they do open the underpass again and there is an increase in assaults and other crime at the station that everyone would blame the government for that too! Unfortunately you just cannot protect everyone from stupidity.

What is it about Bentleigh that causes people to ignore the (many) warnings? Glenhuntly is no different – there is no underpass, and the added complexity of trams too, yet I never hear of any fatalities there. Perhaps it’s cos the trains have to slow down to a crawl through there, even if they are express…

It is hard to know what more can be done to protect people from themselves. Prahran underpass was closed and filled in too. I always found our underpasses to be grimy and in longer ones I never feel quite safe.

I’ve never seen an “another train coming” sign before. Do only a few stations have them? Or are they all over the place, which means I’m just spectacularly unobservant?

I agree that there’s a point at which one has to say: okay, the authorities have taken all the precautions humanly possible – barriers, flashing lights, bells, signs – to keep you off the tracks when a train is approaching. The rest is up to you. If you choose to ignore all the barriers and warnings, and take such an appalling risk, then if you die, your loved ones can have no one to blame but you.

What about a public TAC-style television campaign, showing the terrible aftermath of such incidents? (Or is there already one? – I admit I tend to fast-forward through the ad breaks.)

Daniel, you mentioned right-hand-side boom gates, but noted that they would prevent trapped cars from exiting the tracks. I think a right-hand boom gate is not a bad idea, and surely it couldn’t be too hard to design a boom gate that could easily be pushed outward by such a trapped car, but not easily pushed inward unless a huge amount of force were applied. Whether the cost of such a gate could be justified is another thing altogether, of course.

Why get in the way of Darwinism?

Stupid people do us all a favour by removing themseves from the gene pool. Why waste millions trying to prevent it?

Even if you have no sympathy for those hit, how about considering preventative measures to stop more train drivers being traumatised when it happens?

I think that many of the people who are sufficiently impatient (or so short of time) to ignore the clear warnings are unlikely to spend the time and effort to use an underpass. Particularly if this requires negotiating lengthy DDA ramps.

This behaviour can clearly be seen at McKinnon (your second shot) where people exiting the station to the right largely walk through the emergency exit if there is a city bound train due. They more regularly use the underpass if exiting to the left because they know that they’ll have to wait for the train they just got off, and, normally an express that overtakes the stopper around McKinnon.

Pedestrian behaviour is complex. I think one issue is that pedestrians unconciously feel that the warning devices start too early (the ‘crying-wolf ‘syndrome). An interesting thought experiment is to consider a country road (80 – 100 km/h) and think about the point at which a car would be too close to consider crossing. It is almost certainly closer than the train strike in points. Pedestrians are also unfamiliar with traffic that approaches crossings at substantially different speeds – it’s significant that these incidents involve express trains. Finally, the signal engineers have some responsibility – the strike-in points are often set to save money by re-using existing block joints which can mean excessive warning times.

The long term objective should be to grade separate – drop the railway incl. the station under the road and have the buses pull up directly over the platform(s). Improves train/bus interchange, improves bus and car traffic flow, and eliminates this issue in the process.

Gotta say though, it reminds me of a sign I saw a photo of from somewhere in England warning that urinating on the overhead would have two consequences, the first being instant death, and the second being a 200 pound fine. I couldn’t help thinking the people who were more deterred by the latter should be removed from the genepool in the interests of mankind at large. Really, it’s Darwinism in action. Drivers are trained to activate the emergency brake and then look away.

I’m on the fence here. I think that tunnels are a very good solution, but some people just need to employ common sense and realize that their actions have consequences. Here in Japan there are some notorious crossings with multiple lines – I feel bad for those folk who get caught in those when the signals go off, and they don’t have the speed or agility to get to the the other side – the distance is simply too great for them. But there are also videos of people lifting up the (very lightweight) boomgates and running across the tracks. Madness, but some folk always think speed is of the essence.

No sense of proportion. 4 people in 12 years, or one every three. Surely there are more people being killed doing something else where money being spent would save more? A clumsily written sentence, but I can’t be ar$ed rewriting it.

I have to say I agree with Carla and others about impeding Darwinism. Spending millions isn’t going to stop idiots killing themselves by getting in the way of large, fast moving objects. Build a tunnel, and they’ll probably walk in front of a truck running across the road to the station (or, as has already been said, not use the tunnel even if it is there).

In my opinion, there are more warnings at Bentleigh than an intelligent commuter should need. I wouldn’t expect a teenager (normally our low water mark for risky behaviour) to be blissfully unaware of the flashing neon and clanging bells, let alone a middle aged woman who has supposedly survived multiple road and rail crossings unscathed. Sad for her family, horrifying for the commuters and driver, but seriously – she consciously decided to do something stupid and died for it. Or maybe she thought those signs only applied to less important people than herself?

This morning while waiting in the car at the boom gates at Ormond station (2 stations from Bentleigh) I saw a woman with a child in a heavily laden stroller open the safety gate marked with a large NO ENTRY sign and walk across the tracks.

The recent death on this line appears to have had no impact on pedestrian behaviour.