Trip home last night in the pouring rain was interesting. Train was very slow going between Hawksburn and Malvern, as much of the rail line in the cutting was underwater.

As the train departed Ormond, we saw the subway was flooded. On arriving at Bentleigh we waited about 20 minutes for the rain to subside. The exit itself had a minor flood (a couple of inches) but thankfully the rain had virtually stopped for the walk home, so all that got wet was my shoes and feet.

A short time later the whole Frankston line was suspended, so we may have caught one of the last trains out of the city. At one stage 9 out of 16 lines were suspended, and there were widespread disruptions to the tram network (yet almost no information about which lines were affected… grrr).

Getting home, the neighbours said they had a blocked gutter causing drips in the livingroom. Then we discovered a similar story at my place in the small back (spare for now) room — looked like the gutter above the back porch had overflowed. I got up on the roof this morning to check… the gunk in there may have contributed, along with the drains. 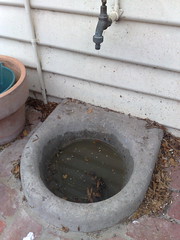 It appears that the heavy rain the drains backed-up. The gully trap is certainly close to full, and another neighbour says it used to occasionally happen 20ish years ago, so she reckons if it doesn’t rain heavily again today it’ll clear.

Given the disruptions, I’m waiting for someone to proclaim this is another one of those “once in 100 years” storms we’ve been having recently.

I’d heard about Ormond. I should pop along and have a look at the op shop, the one opposite the station. For my sins I’ve been elected the Vice President and should just make sure it’s okay.

From the timing of your tweets (I was reading them on my train) I was on the Frankston train after you and I’m pretty sure we would have been the last. Took an hour to get from Flinders to Malvern. Saw one train full of people stranded just after South Yarra and an empty up comeng at Toorak (pity the poor people trying to get home from there).

Tracks were pretty much a raging torrent by that point, Hawksburn was pretty much an angry sea! Driver did a great job to get us through, there were a few times I was sure we would just have to stay put.

It seems like fait accompli that when we get torrential rain (which does happen a few times every year) the trains all have to be shut down. Do you know if there is anything that can be done to fix this?

I’m told by my local family train expert that the lines that stayed open were the ones that still use the 1920s technology. I might have got that a bit wrong, but I find it a fascinating concept that the old stuff is built and works better even today than the recently refurbished stuff. Comments?

It was quite amusing to see Toorak road flooded. While it was a significant event, one can only what a worse one would be like. It would be interesting to know what category of storm the current stormwater drainage system was built to cope with, and if in future such planning needs to be revisited or if councils/vicroads judges the events to happen too infrequently to put in the extra cash. Flinders St always seems to flood with any rain event, and while its a natural flood path, one can’t help but wonder if mitigation could be handled better.

The bus I caught at Bentleigh afterwards arrived right on time as though nothing happened.

My hub is a meteorologist and all this rain is just the effects of the cyclone. We had a similar downpour last year (remember the hail and busted cars and roofs?). However the cyclone is linked to El Ninio which is linked to global warming……

i was in a pub on brunswick street, fitzroy, when the downpour started. the street flooded and we didn’t see a tram for ages….then we came home to a flooded loungeroom :/

It was Friday night. Vic Roads, Metro and Yarra tech staff couldn’t be expected to hang around to update service information. Maybe emergency plans need to be put in place. St Kilda Road trams were stopped for three hours I believe with several suffering water damage. Premier Teddy Bails at his press conference this morning mentioned that St Kilda Road services were still disrupted. They were not.

@Carly, we saw the following train arrive, as we’d been waiting at the station for a gap in the rain. Mind you during that wait might have been the time that the exit flooded.

I suspect part of the problem is the drainage systems in place. A lot of water seemed to be overflowing from elsewhere, onto the tracks near Toorak etc.

@Andrew, Metro managed to do really well at posting updates via their web site, Twitter feed and Metlink’s web site, all night until late, and all day Saturday. But Yarra Trams… nothing. Seems they’re just content to let people use Tram Tracker – which in this kind of situation doesn’t really help very much.

Well done Metro then. I did not actually check and shouldn’t have lumped them in with Yarra and Vic Roads. Slight correction, St Kilda Road services suspended for one hour.

All those gardens paved and built over will increase the storm runoff in suburban areas substantially.

The 1 in 100 year description is a probability of a storm’s occurrence, not merely a simplistic prediction of how frequently such storms will occur. Having two “100 year events” in 2 months is not at all impossible, it’s just highly unlikely. Add to the mix that these probabilities are based upon historical rainfall data and the climate change we’re experiencing, and you’ll soon see that they’re far from foolproof.

There’s an interesting explanation on the Bureau’s website (http://www.bom.gov.au/hydro/has/rare_text.shtml) which tries to make sense of it. (Warning: may contain engineering jargon.)