In the 90s, phone numbers were going to run out if we didn’t take the plunge and switch from nine digit 0x-xxx-xxxx numbers to ten digit 0x-xxxx-xxxx numbers. The telecommunications industry (led by… was it Austel?) got everybody switched over okay.

The Number Resource Organization (NRO) announced today that the free pool of available IPv4 addresses is now fully depleted. On Monday, January 31, the Internet Assigned Numbers Authority (IANA) allocated two blocks of IPv4 address space to APNIC, the Regional Internet Registry (RIR) for the Asia Pacific region, which triggered a global policy to allocate the remaining IANA pool equally between the five RIRs. Today IANA allocated those blocks. This means that there are no longer any IPv4 addresses available for allocation from the IANA to the five RIRs.

It’s happened because of a huge expansion in IP addresses allocated to everything from home computers to laptops to portable devices to fridges. Technologies such as NAT help share the addresses around (for instance all the computers in your house sharing a single IP address visible to the world, allocated to your router/modem), and will be important at least until the switch is made to the new standard.

Newer computer operating systems cope fine with the new standard. If I “ping localhost” (eg ping my own computer) it doesn’t tell me it’s looking at the old familiar IPv4 address of 127.0.0.1, but instead calls it [::1]. 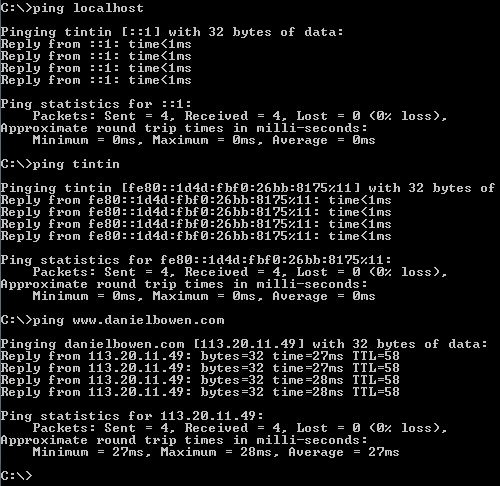 Pinging it by name (Tintin) gives me the full IPv6 address. But pinging anything out there on the internet gives me the old IPv4 address. [See picture]

Part of the problem is, as Wikipedia notes:

Because the headers of IPv4 packets and IPv6 packets are significantly different, the two protocols are not interoperable.

I assume that means that for a switchover, every device, including all the routers and modems and equipment at ISPs and elsewhere on the network, needs to make the transition across to the new standard.

It’s likely to be invisible to consumers, who will continue to use domain names (eg example.com) rather than IP addresses, but it could get messy for geeks having to implement the changes.

Perhaps, unlike phone numbers, it takes the old addresses running out to force the switch to happen.

Update: Computerworld has an article comparing where different Australian carriers are up to in adopting IPv6.

as with everything, the devil is in the detail – there are some ipv6-ipv4 conversion mechanisms, but the biggest problem is that the ipv6 spec hasn’t been banged on as nearly as much as ipv4 so there are likely to be unknown technical issues with it down the track … which is a chicken-and-egg problem since no-one wants to get burnt by it first, so they don’t adopt ipv6 and find out … Google and Yahoo have tried to provide ipv6 services, however for them they have the problem that even 1.5% of dud clients represents a a huge hit in advertising revenue …

Your screen grab looks like something called DOS.
I didn’t know it was still available!

Interesting, I could reproduce your results on a WIN7 box, but Vista and Xp just give IPv4 results. Although, my RTT for danielbowen.com was 47ms. The reason you only get IPv4 externally is because the connection to your ISP is only IPv4 and so that’s all you can get, even though your box is IPv6 capable.

The biggest issue, as I see it, is that there are millions of boxes out there that can only handle IPv4. In a home environment, though this problem could be over come with a router/switch that can do IP4v to IPv6 as part of its NAT functionality