My favourite picture from Friday’s floods; courtesy of Herschel Landes, who snapped it at Windsor Station (on Saturday morning I assume). 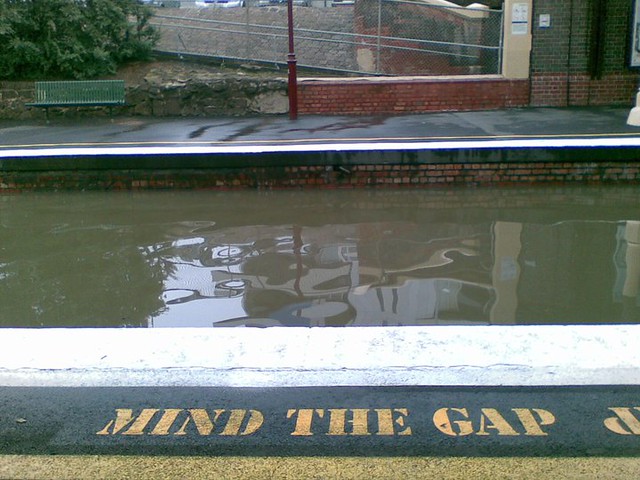 The trains had stopped running on many lines on Friday night. But earlier when the water level was lower, they had been running through Windsor, as shown in this video someone posted to Youtube:

As I noted in a comment on my post the other day, Metro did well at posting updates to their Twitter feed, web site and to Metlink’s web site. Vicroads also seemed to post a fair bit of information on their site.

In contrast, Yarra Trams, which also suffered disruptions, said nothing, content to let people guess what was going on from uninformative Passenger Information Displays at major stops, or Tram Tracker, which can only tell you that the tram isn’t coming; not why or for how long there will be problems.

Buses? Nup, forget it. Little or no information provided.

One would hope that all train, tram and bus information was available by phone from 131 MET (131 638), if you had the patience to ring — but who knows.

And ultimately what’s really needed is for someone who knows what’s running and what isn’t to be able to tell you “well train A isn’t running, and nor is tram B, but if you catch a tram C down to D, you can get a bus E from there.”

That’s the kind of information people need in a major disruption… and the sort of thing I occasionally get asked by friends who are stuck — this time round it was KW, who eventually caught a bus home with just her and the driver aboard… a little more like a limo than a bus, I suppose.

Update: Not the first time Windsor’s been flooded.

Pffft.. it’s been done before in Miyazaki’s Spirited Away.

People on the soaked Sandy line were told to catch trains to Caulfield on Friday night. But there were no buses from there. So lots of spouses made the scary drive through flooded roads to get hubby/the misses home.
The good news is the Sandy line was running this morning.

I checked Vic Road’s site Saturday morning and the closures listed were from the country floods the week or so before. Someone posted a photo of a flooded Queens Road and I checked to see if was ok.

Yup the tram info was abysmal. We had a heap of people stuck at work late Friday night, with no way to get home as the trains weren’t running to their areas. The bus and tram lack of information was really frustrating.

Hooley Dooley! Here in Flemington we must have been just a little bit higher up – a heavy shower and that was it!

I know what you mean about the trams. I was particularly worried as I was catching a tram from Preston to St Kilda Road near Windsor station Saturday morning. I knew some of the roads etc around there were flooded and trams might be delayed. But totally no info on their website about anything. Zip at all on the fact there was flooding. Luckily my tram was running and I didn’t waste the journey from Preston. Glad I didn’t get it into my head to catch the train though!

Windsor station was still flooded on Saturday evening when I walked past – there were so many photographers and onlookers you’d think it was a tourist attraction.

Probably the same event but with water washing over the platforms. Photo by Peter Gamble. http://i28.photobucket.com/albums/c230/ozandrewau/Flood_3.jpg

I tried to catch a number 96 tram up Nicholson St at about 7:30pm and none showed up for 45 minutes. I rang the Metlink number and they had no idea what was going on. I couldn’t find a cab, so I was forced to take an 86 up Smith St and walk to my final destination (which was in Johnson St). It was incredibly frustrating and I still don’t know what happened. More information is LONG overdue.

Providing advice about alternative ways of getting to your destination by PT is certainly admirable. The only problem is if thousands of people are put out by a train line going down in peak hour, and all try to use the same regular tram and/or bus routes as an alternative at the same time, those trams and/or buses simply won’t cope.

It’s probably slightly more workable to divert people to a nearby train line, depending on how much spare capacity can be filled. Here’s a crazy thought: try to reroute the cancelled trains onto parallel lines to maximise capacity on those lines. Cancel all express trains and just run as much as possible all-stops. Scrambled replacement buses could then run from stations on those parallel lines (like Caulfield to Sandringham, as sometimes happens), which gives them a shorter run and allows more trips.

As is it now, the bus alternatives out of the CBD are well kept secrets. Which is great for people in the know! :)