This week’s events in Queensland are a reminder that precautions need to be taken to minimise the possibility and effects of flooding. So it’s good to see around my neck of the woods that the drains are being upgraded. These huge Lego-like pipe sections have appeared in some streets. 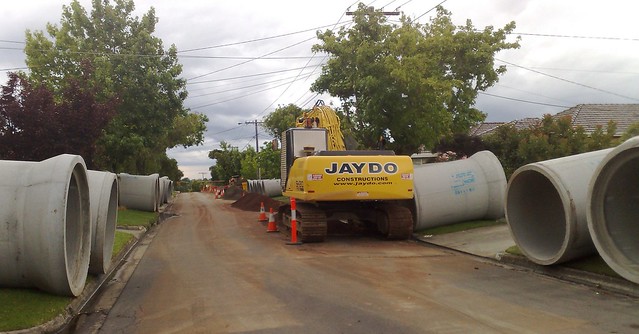 Presumably they’re big enough to cope with any foreseeable water flow. Certainly big enough to allow a dorky photo of oneself inside one. 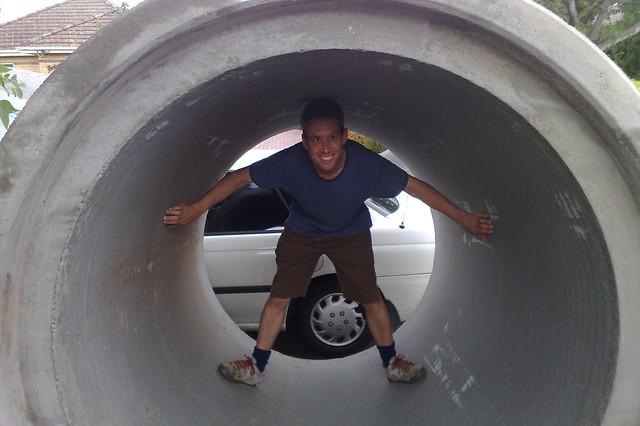 Of course the installation is causing some disruption to traffic. I believe my street was done just before we moved in, which was a stroke of luck. But hopefully most people would appreciate how important it is.

Good to see “big kids” having fun during school holidays !

Haha that photo is hilarious!
Hopefully they do manage to cope with whatever water-flow Melbourne will likely receive, but for some reason I can’t imagine these would have helped too much in Queensland. At least where people suffered flash flooding, rather than the slightly slower creeping sort.

• Flush jointed; and
• Rubber Ring Jointed (the ones you were in) – used for areas likely to experience settlement and often stipulated by authorities anyway
Humes and Rocla are major suppliers of RCP’s

• Fibre Reinforced Cement (FRC) – the modern equivalent of the old asbestos pipes – available up to 600mm. FRC pipes were used on the Eastlink project
http://www.jameshardiepipes.com.au/

What will have happened in your area is the council will have had a consultant do a drainage study (been involved in those). The underground system is typically designed for a ‘minor’ storm event (5 or 10 year) with the ‘major’ storm event additional flow passing down the street (the street layout and block heights should consider this).

Additional underground capacity may be required in low trap areas where inundation occurs – looking at the pipes you’re squatting in it sounds like your area is that category!!

Wow!
For a historical/size/ comparison pop into the Laura and Charles Ferguson Museum in Mentone and have alook at the original wooden drains they used in the surrounding suburbs – so tiny when you look at those whoppers!
Monash has had new pipes in some streets but no where near that size.

Howd you manage to get in there without getting caught?

That size of pipe is really only used as a main stormwater drain, not all houses would have those massive pipes underneath them

@Phill, caught by who? Look at the pictures; the workers had finished for the day, there was nobody around.

@Lucas, correct, drains under the street, not to each house.