If you’re ever at Footscray Station on the footbridge (the one they’re going to have to extend, even though they just built it), and you look towards the east, you’ll see something from a bygone era. 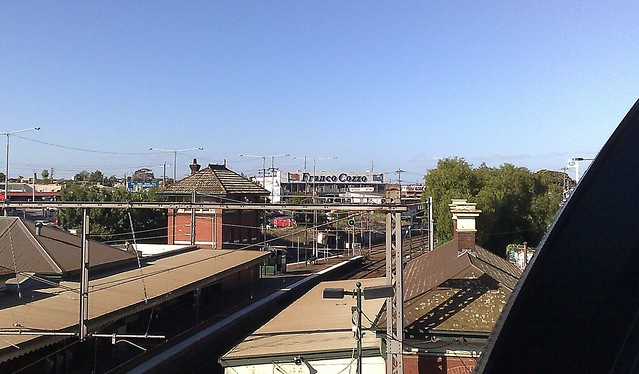 You might just be able to make out the words “Franco Cozzo” on an off-white building in the distance. 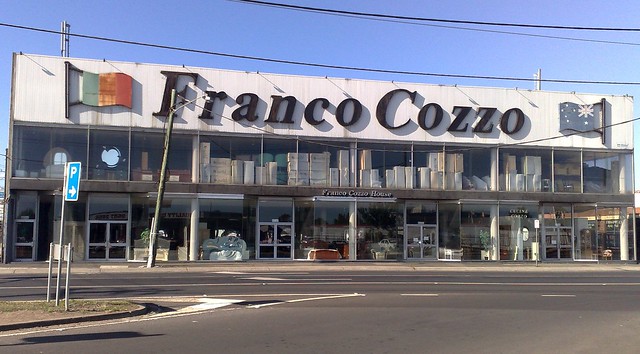 Yes, Franco Cozzo still exists, in Brunswick and Footscray, but the perhaps once-grand building (at least in Footscray, where it is called “Franco Cozzo House”, no less) is looking a bit the worse for wear.

It’s not in a great location, either — a bit distant from everything else in Footscray, and on a traffic sewer, with no passing pedestrians and no parking. When I’ve been going past, I don’t think I’ve ever seen a soul going in.

And I haven’t had a look inside myself, as I must confess, that style of furniture just doesn’t appeal to me.

Judging from what can be seen in the window, it’s the same stuff as in the old adverts, which have surfaced on Youtube:

And the man himself (at least as recently as 2006) can still do the spiel:

It reminds me of advertisements we used to have here in the UK for a furniture chain called Williams. Their strapline, uttered by customers-who-were-plainly-bad-actors used to be “Where else?” and the answer, invariably, was “anywhere else”!

In all of my time in the west and passing this “establishment”, I have never noticed that the Australian flag was reversed. Weird.

Now you’ve got me started!

As someone with Italian parents (don’t like using the term Italian-Australian, I’m Australian, with an Italian heritage, don’t like the division hyphenated names creates) you don’t appreciate how significant that ad is to the Italian community! Franco Cozzo is somewhat of a cult figure, even more so than he is within the wider Melbourne community. Having said that, I don’t know anyone who has ever bought couches from him! My memory goes all the way back to the early-mid 1980s watching that ad! One of the things I always admired was that he could get away with using the same ad for over 20 years, and people still remembered and bought it! Can’t think of any other company that could get away with that today!

For those of you who remember the Laura Brannigan versions, please give both these original clips a listen, as they are far superior (even if you don’t understand the Italian lyrics) and you’ll finally understand where Brannigan got the songs from- without Umberto Tozzi, she’d be hardly remembered today, wonder how many people knew that?

Migalo, Migalo, Migalo. (Excuse my spelling if it’s wrong… I’m assuming this is from the Greek section of the ad).

Wasn’t here some controversy about couches being imported with a little more than the normal stuffing inside?

It’s funny I’ve seen the Footscray “Branch” hundreds of times. But I’ve never come across the Brunswick one, no idea where it even is.

The Brunswick store is on the corner of Sydney Rd and Victoria Street- drove past it about a year ago, and almost missed it! It’s on the corner of a row of shops! It’s not all that big! And with the Footscray one, you can see it on Google Earth- in 3D! It even has the Franco Cozzo logo on the 3D image! If anyone knows how to post placemarks from Google Maps for the general public to see, I’d be more than happy to post the placemarks for both stores (created them ages back!)!

Are they still selling the same hideous furniture? Seriously, who bought that ugly crap?

Whatever happened to the North Melbourne branch?
Loved those ads when I was a kid.
Might freak out the teen with one right….now!

We drove past the other day. I made DD take a photo as I’d never seen it before.

@par3182, have a look at the big version of the picture; you can see some of the furniture through the windows.

@Jayne, I think “Nordo Melbono” was probably a bit much to say! I admit I don’t recall the North Melbourne one on the ad, but I know someone who has mentioned it was in the ad! Must have been canned in the very early 80s!

@par3182, I think I can answer that one! From personal experience, nearly all of the older Italian immigrants (such as my grandparents, aunties and uncles, probably moreso the women) were VERY fussy on how the house looked on the inside. I don’t know if you’ve ever heard of the comic Joe Avati- he’s a first-generation Aussie comic from Sydney, and he highlights it perfectly, that those older women always had two sets of everything- one (usually the inferior of the two) for everyday family use, the other (the superior set) was only dragged out specifically for visitors! Well, same for the furniture! Many of the oldies who have large enough houses usually have two lounge rooms- one for everyday use, and one solely used for visitors! That one has all the nice displays, and that one would have the Franco Cozzo furniture! Indeed, those rooms were generally off limits to us most of the time- I have a few aunties that have such rooms- one aunt never allowed us kids, or the rest of the family, to sit on the couches unless visitors were there! You’ll probably find that as the older generations die out, Franco Cozzo (the stores, I mean) will probably go along with them (or probably with him, for that matter)!

It’s funny isn’t it – I was just looking at this building when I was stuck at the lights the other day and thinking how under developed this part of Barkly Street is. There are bombsites all around it and it is only tens of meters away from the Maribynong river and great views of the city.

My prediction about five years hence – The Franco Cozzo building will eventually come down and a tower for student accomodation will take its place.

I pass the Sydney Rd one often and I’ve never seen anyone in it. However, I did see the big man one day outside having a chat to some of the locals. Still suited up, but with sneakers on.

I, too, heard the rumor of drug importation via furniture, however I heard it was via a son or someone related, not the actual man himself. The fact that we can all remember these ads show that they were effective for recall. Perhaps not so much for purchasing though.

Can anybody point me toward a link to the Franco Cozzo song (not the ad)?

I’m not an Italian, I’m a skip as peop[le now say but I do appreciate the hard work the Italian families have put into making this a great and prosperous nation. Franco Cosso is a name synonymous with Italians in Australia and has been one of those hard workers. He can still be found at his store today. I also believe he is a very generous man. That’s what we like to think all Australians are but not all live up to it. He is a great Australian. Goodonya Franco!

I just saw the Franco Cozzo ad on tv. It is the old ad from the 80s. Not sure if they have updated the furniture. It is hard to tell.