I’m not going to name names, but two people remarked to me last week that the Queensland floods wouldn’t be that bad, because all the houses have stilts, so everyone up there would be fine.

I wasn’t about to get into an argument about it, but at the time I had my doubts. I suspect the people involved (both a generation older than me) have in their minds that the whole state is filled with “traditional” architecture of the Queenslander style — in particular those with stumps/stilts that let’s the house sit above ground level.

I may not have been to Queensland for twenty years, but I know it’s simply not true. As in any modern urban area, places like Brisbane (under threat now from floods) and the many regional cities have a wide variety of architecture, and traditional structures like stilts may or may not be integrated into modern designs, particularly as local drainage systems improved and the risk of termites and other pests (a reason for the stilts) may have been less prominent.

In any case, in the last day or two the flooding has got significantly worse. This video from Toowoomba shows just how quickly it can develop from a mere raging torrent into a dangerous situation where cars are thrown about like toys.

A number of people are confirmed dead, and many more are missing from places like Toowoomba.

Two-thirds of Queensland has been declared a disaster zone, and for those outside Australia trying to judge how big the problem is, the flooded areas are said to be about the size of France and Germany combined, or for our American friends, the size of Texas and Oklahoma combined. 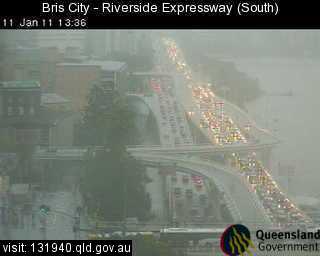 Brisbane is now under threat, with some of the images yesterday of thousands fleeing central Brisbane reminiscent of disaster movies — proving yet again that freeways are no good for moving large numbers of people at once (but if you’ve driven in, and you can’t get back home any other way, what choice do you have?).

My uncle lives in Gordon Park, in inner-suburban Brisbane. Thankfully his suburb is not on the list of those likely to be affected by the river breaking its banks, and the excellent flood maps prepared by Brisbane City Council show that even if local flooding occurs, his street (which is on a hill above a park and a creek) should be safe. My sister rang him last night to check on him — he’s doing fine so far.

A lot of areas will not be so lucky though, and one can only offer best wishes to those caught up in the flooding.

Even if someones house is safe doesn’t necessarily mean they are OK.

The Just-in-Time logistics that the supermarkets use means that when the truckies have more pressing emergency concerns they don’t show up. At that point, the food, emergency bottled water, toilet paper and other essentials disappear off the shelves. Panic buying then ensues on other items.

I confess that I thought that the “Queenslander” style of houses would help with what happened (as it evidently has in some cases). I do however acknowledge that not all houses there are built like that (and more than we in England all live in thatched cottages or Canadians in igloos).

What was significant though was a statement made on television by the Queensland Premier. Referring to the 1974 floods, she remarked that Brisbane and Ipswich were very different places now, not “large country towns” but major metropolitan areas. Now I suspect she was meaning that they would be better prepared now with a more comprehensive set of emergency procedures. I certainly hope that’s true.

However, my first thought was that that urban expansion was actually achieved by building suburban sprawl on what were previously flood plains. This is a repeated feature here in Britain in places like the Severn Valley but will presumably be repeated on a far larger scale in SE Queensland. I hope that planners knew what they were doing building for that urban growth. :-((

People in Britain have been very moved by what they’ve seen and not a few are already asking why – when we are rightly willing to send aid to other countries hit by natural disasters – no noises in that direction seem to have been made yet here.

Even the classic Queenslander is not going to help if the floodwaters are too deep… the Age has a series of photos of the 1974 flood. Have a look at this photo:
http://www.theage.com.au/photogallery/environment/weather/historic-photos-of-brisbanes-1974-floods/20101012-16ggu.html

Have a look at some of the other photos – particularly the aerial ones – and remember that the forecasts are that this flood will be WORSE than the 1974 flood.

I interpreted the Premier’s comment about the growth of Brisbane and Ipswich as meaning that this time it will be worse – far more people will be affected, and the infrastructure is more complicated.

What was significant though was a statement made on television by the Queensland Premier. Referring to the 1974 floods, she remarked that Brisbane and Ipswich were very different places now, not “large country towns” but major metropolitan areas.

Brisbane was regarded by many people in NSW and Victoria as nothing more than an overgrown country town — at least well into the 1960s. Clem Jones, the mayor who destroyed the city’s fine tramway system, stood on a platform of modernising the city, which did not even have a sewerage system when he was first elected in 1961.

Anna Bligh was a 14-year-old student in 1974 and likely remembers the city then as having that “country town” reputation. Ipswich was a small provincial town about an hour by train from Brisbane at the time. Now it is a satellite city of Brisbane.

After the 1974 floods, an enormous dam was built to “prevent” another such flood. That dam, Wivenhoe, is now 200 per cent full — yes, 200 per cent — so is having to be spilled to prevent the even bigger disaster that would happen if it were not spilled. The spilling, of course, is exacerbating the flood problem in Brisbane.

Nice to meet you again Ian!

Having gone through a flood here in Nashville about with months ago, my heart goes out to everyone down there. It sucks.

“Brisbane is now under threat, with some of the images yesterday of thousands fleeing central Brisbane reminiscent of disaster movies — proving yet again that freeways are no good for moving large numbers of people at once”

Don’t think PT is of much use to them at this point either:
http://www.translink.com.au/travel-information/service-updates/bulletin/1294725593

That aside, my thoughts and prayers go to all the people of Queensland, and particularly those who have been affected by the floods, and to those who have lost their lives.

Hi Daniel,
I thought I would let you know that I have mapped all the supermarkets in QLD, showing which supermarkets are unlikely to be functional and which ones are in non-flooded areas. With over 1,200 supermarkets in QLD (and most of them in the most populated areas), there are options to but groceries. Indeed, the major problem is supply from the major distribution centres, which also happen to be in Brisbane.

The maps I am referring to are in my blog:
http://www.food-chain.com.au/events/?p=982

I am hoping they will be useful to the general public.

Wivenhoe Dam can go up to about 225% before the water starts cresting the dam wall. However, they don’t want to let it past 200% for various reasons. Apparently it gets harder to control the releases the higher the water gets.

I do like the mathematical oddity of a dam that can apparently “go up to 225% capacity. Doesn’t that mean that someone has misunderstood the concept of what 100% is?

It reminded me of a British Trade Union leader who once claimed that he wouldn’t be satisfied until everyone was earning more than the average wage!

PS I wondered if you were the same David M, David! Nice to come across you again, too!

100% at WIvenhoe Dam refers to the part of the dam capacity allocated to urban water supply requirements, not to overall capacity. The dam is supposed to remain about 2/5ths full under normal circumstances so that the remaining capacity can be used to mitigate major floods. It was built in the wake of the 1974 floods. and for the most part, appears to be working as intended.

Thanks for explaining that, Peter. So in fact, it’s the journalists sloppily reporting things that makes it mathematically wrong, rather than the engineers!